“Where Do We Go from Here?” - The Power of Questions

On the heels of a June and July that saw riots in major cities throughout the United States with death tolls reaching 23 in Newark and 43 in Detroit, King delivered his last presidential address to the annual convention of the Southern Christian Leadership Conference in Atlanta on August 16, 1967. Newspaper headlines on that day reflected the controversy and criticism generated in response to King’s remarks the previous day when he denounced the racism of Congress, affirmed black outrage over urban conditions, and called  for “mass civil disobedience.” In his address entitled “Where Do We Go from Here?” King displayed his remarkable ability to articulate the systemic character of oppression in a way that raises the consciousness of his hearers. 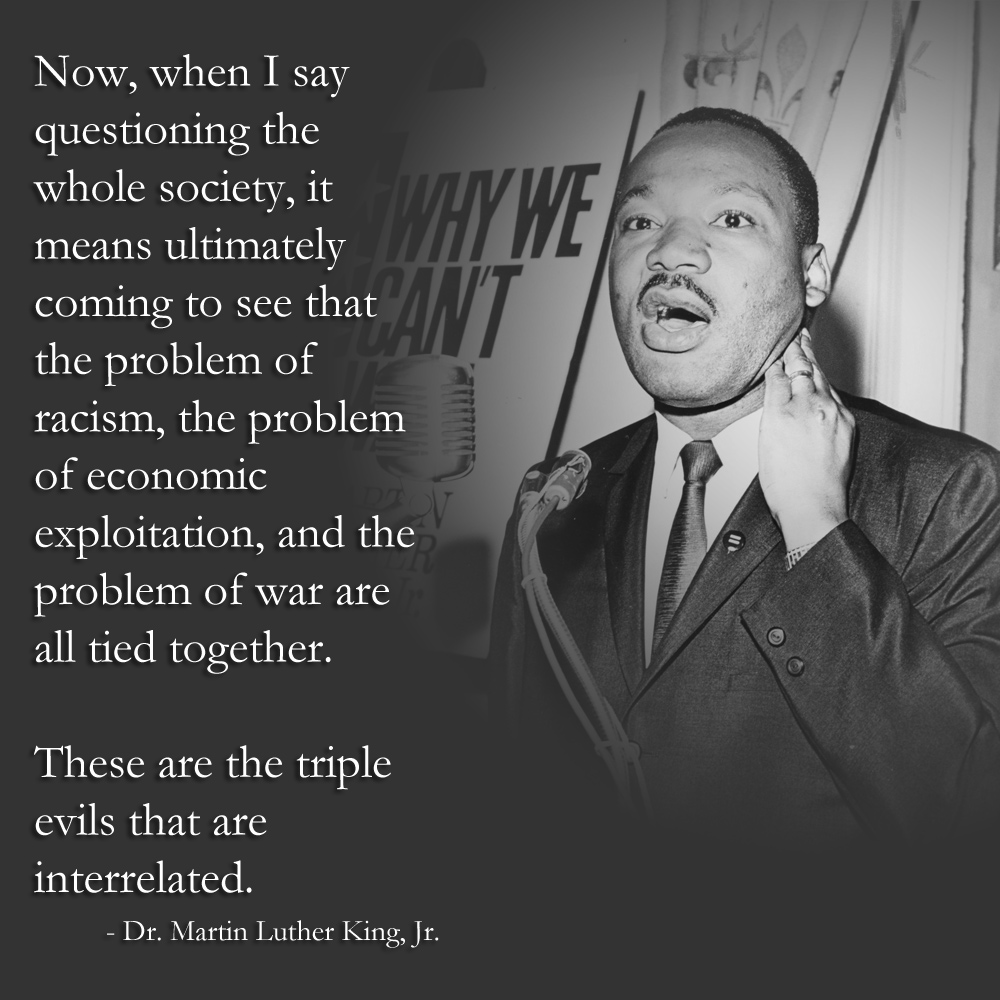 In the speech, King makes a case for the fundamental restructuring of society. In doing so, he lays out a series of provocative questions that ultimately compel a critical view of the entire “capitalistic economy.” Ahead of his time, King posits questions that would now be considered central to an environmental justice perspective. He asks, “Who owns the oil?” and “Why is it that people have to pay water bills in a world that’s two-thirds water?” With prophetic clarity, King saw how different evils become intertwined and interrelated. As much as ever, these insights are still needed today.

Excerpt from “Where Do We Go from Here?”

I want to say to you as I move to my conclusion, as we talk about "Where do we go from here?" that we must honestly face the fact that the movement must address itself to the question of restructuring the whole of American society. (Yes) There are forty million poor people here, and one day we must ask the question, "Why are there forty million poor people in America?" And when you begin to ask that question, you are raising a question about the economic system, about a broader distribution of wealth. When you ask that question, you begin to question the capitalistic economy. (Yes) And I'm simply saying that more and more, we've got to begin to ask questions about the whole society. We are called upon to help the discouraged beggars in life's marketplace. (Yes) But one day we must come to see that an edifice which produces beggars needs restructuring. (All right) It means that questions must be raised. And you see, my friends, when you deal with this you begin to ask the question, "Who owns the oil?" (Yes) You begin to ask the question, "Who owns the iron ore?" (Yes) You begin to ask the question, "Why is it that people have to pay water bills in a world that's two-thirds water?" (All right) These are words that must be said. (All right)…. Now, when I say questioning the whole society, it means ultimately coming to see that the problem of racism, the problem of economic exploitation, and the problem of war are all tied together. (All right) These are the triple evils that are interrelated.

Delivered at the 11th Annual SCLC Convention Atlanta, Georgia. August 16, 1967. Listen to the last 16 minutes of audio of King’s speech or read the full text.

Rev. Brooks Brendt is the UCC Minister for Environmental Justice.