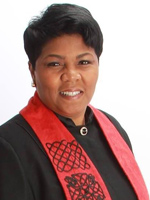 In a recent interview Traci stated, “I am excited and humbled to add my voice to that of our national office as acting executive minister of Justice and Witness Ministries. Since accepting the appointment, I have spent time deepening my understanding of what is meant by Justice and Witness. The spiritual meaning of justice is an adherence to standards that align with what we know about the nature of a loving God, even when those standards exceed mere human reasoning. Witness is the manifestation of those standards in our daily lives."

Initially ordained in the AME Church, Blackmon holds a B.S. degree in nursing from Birmingham-Southern College (1985) and a Masters of Divinity degree from UCC-related Eden Theological Seminary (2009), with a coursework emphasis in Womanist Liberation Theology. Prior to entering seminary, Rev. Blackmon served as pastor of Simpson Chapel AME Church in Columbia, Missouri for two years.

With more than 25 years work experience in health care as a licensed RN, Reverend Blackmon has served the community in a variety of professional positions as well. She was previously employed as the Coordinator of faith-based initiatives for Barnes-Jewish Hospital and as a senior consultant with The Praxis Group, LLC. Reverend Blackmon has created and facilitated workshops on such complicated issues as race, class, gender, grief, and domestic violence. She is a graduate of Leadership St. Louis, one of the most highly-respected leadership development programs in the nation, and has served on numerous boards, including the St. Louis Effort for AIDS, St. Louis, St. Louis Minority Business Council, among others.

Traci "treasures the privilege" of being mother to Kortni, Harold II, and Tyler Blackmon.

Please join us in welcoming Traci Blackmon to the national setting of the UCC. 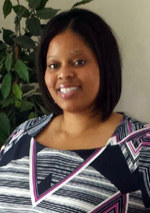 Ms. Quan Williams was raised in Southern California but is a native of Chicago, Illinois and daughter of Trinity United Church of Christ. Quan earned a Bachelor of Arts degree in Pan African Studies specializing in Arts and Literature from California State University, Northridge. In 2011, she graduated from the University of Illinois at Chicago with a Master of Urban Planning and Policy degree. There, she received the Rob Mier Award for planners committed to social justice for neighborhoods and residents. She is a class of 2015 graduate from the Samuel DeWitt Proctor School of Theology at Virginia Union University where she earned a Master’s Degree in Divinity.

From 2013 to 2016, she worked toward Environmental Justice and Criminal Justice reform as the Policy Associate for New Virginia Majority, a state-wide advocacy organization. In addition she is a member of Delta Sigma Theta Sorority, Inc. and embraces community service as a lifetime commitment.

Ms. Williams is passionate about Prison Ministry and has worked in some capacity with or on behalf of the incarcerated for the past 14 years.

The passage Isaiah 61:1 is of particular relevance to her ministry where it reads: “The Spirit of the Sovereign LORD is on me, because the LORD has anointed me to proclaim good news to the poor. He has sent me to bind up the brokenhearted, to proclaim freedom for the captives and release from darkness for the prisoners...” (NIV)