From Atlantic to Pacific, United Church of Christ congregations, clergy and Conference leaders have marched and spoken out in response to the Memorial Day killing of George Floyd at the hands of Minneapolis police. They have called for prayer and action – and for Americans to recognize the stubbornness of racism and police brutality. 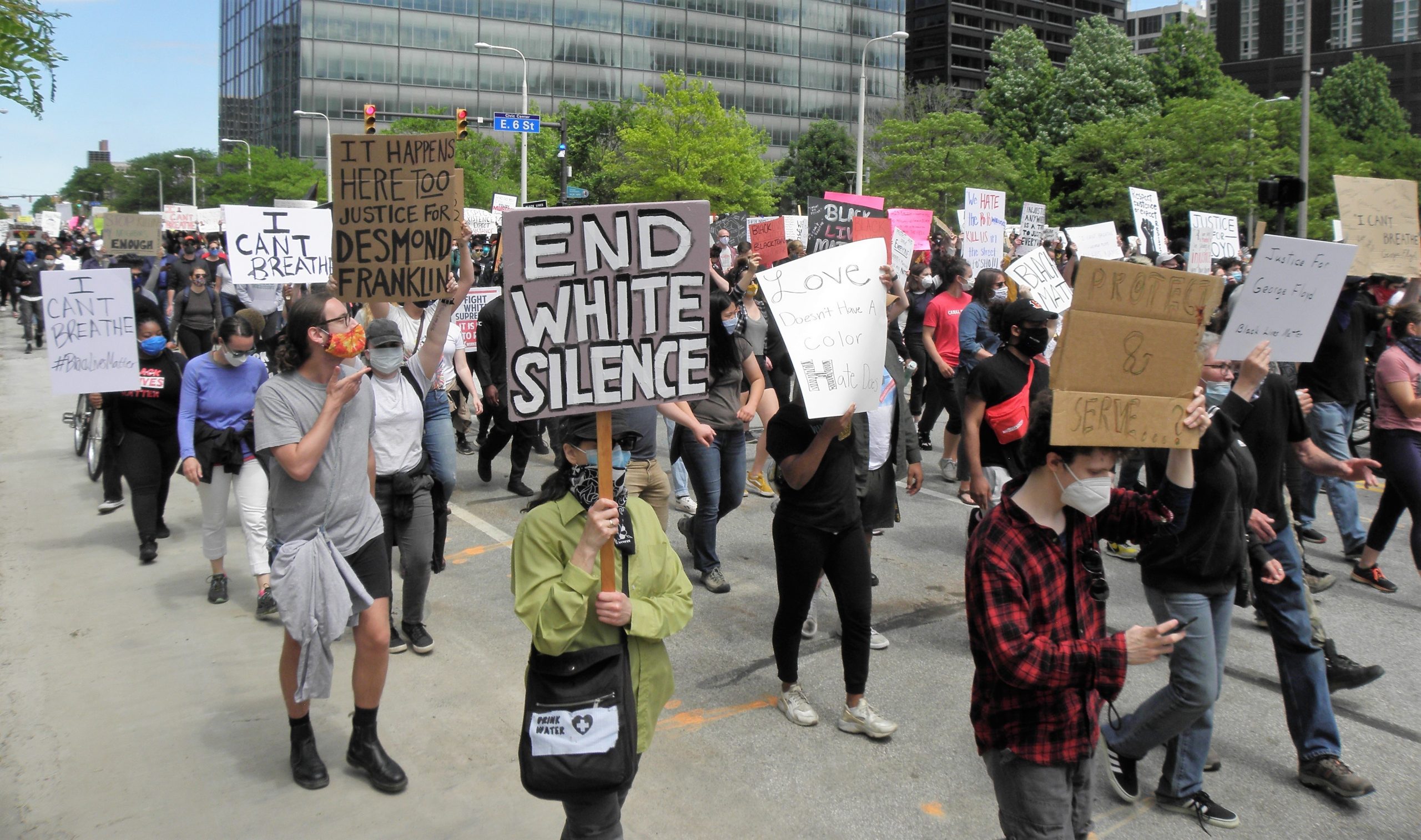 Some, as in Omaha, Neb., and Palm Springs, Calif., have issued statements along with people of other denominations and faiths. Others, as in Hawaii, have called for specific times of prayer.

In Minneapolis, where four police officers have now been charged in Floyd’s May 25 death, ministers of multiple denominations – including many from the UCC – marched together for justice June 2 and knelt in Floyd’s memory at the site of his death. [See related story.]

In Atlanta, social media posts calling for property destruction prompted the Rev. Derrick Rice, pastor of Sankofa UCC, to team up with dozens of African American men outside a large store that had been targeted and warned young people not to endanger themselves.

“They were going to loot and there were at least 30 to 40 cars of young people who rode by to come and do something,” Rice told WAGA-TV. “We recognize that these actions can lead to terroristic charges for these young people and that’s something that could change the course of their lives forever. I’m convinced some of these demonstrations are organized by outside agitators who don’t care about what happens to these young people.”

Rice said he and other activists planned to help young people craft goals and outcomes for their protests.

“We’re not saying not to protest,” he said. “I understand their rage. And this isn’t about us protecting Target or other stores. This is about making sure we help them direct their outrage in a way that will change the system and not their lives in a negative way. We have to show them how to be strategic, how to organize in a way that we can gain victory – and tearing up buildings in Atlanta is not the effective way to do that.”

Conference statements used everything from personal testimonies to poetry in their calls for justice and action – and in reminding readers of how long racism and police brutality have plagued the United States.

In his statement, “How Long Oh Lord, How Long?,” the Rev. Edward Smith Davis, Conference minister of the Southern Conference, said the deaths of Floyd, Ahmaud Arbery, Breonna Taylor and others reminded him of growing up in Chicago. The police there, he said, would force him and others to the ground, at ages as young as 12 and in temperatures as low as 0 degrees.

“After searching our pockets and [finding] no paraphernalia that could link us to any crime, we were still forced to lie on a frozen ground for, often, 20 to 30 minutes … what felt like an eternity,” Davis said. “It was during those times I realized how quickly things could go severely wrong.”

In her commentary, “There are Precious Few Good Police,” the Rev. Marilyn Kendrix, bridge Conference minister in Southern New England, also reflected on growing up black in America – and urged readers to consider those experiences before dismissing her viewpoint as merely “provocative.” “If there were enough good police, there would be no blue veil of silence that condones the brutality of fellow officers,” Kendrix said.

“Let us agree to make no more assumptions that because we are progressive Christians, we are not racists,” said the Rev. Bill Lyons, Conference minister of the Southwest Conference, in his message, “What Will the Church Do About the Lynchings: A Letter to White Christians.”

“Let us put as much work into dismantling our own individual racism as we have put into our collective statements of solidarity with communities of color, protests, expressions of outrage, and social media posts,” Lyons said. “Let us agree as clergy and lay leaders … we will intentionally and overtly act to dismantle racism in all of our ministry settings and in the systems in which we live socially, economically, legally and politically.”

Messages from Conferences and national bodies of the UCC

Following are links to statements issued by UCC Conference leaders, addressing Floyd’s death and the uprisings and demonstrations it has unleashed.

And here, in addition to ones reported earlier, are recent statements from national UCC bodies:

[This article was updated on June 8, 2020, adding statements from additional Conferences and from national bodies.]