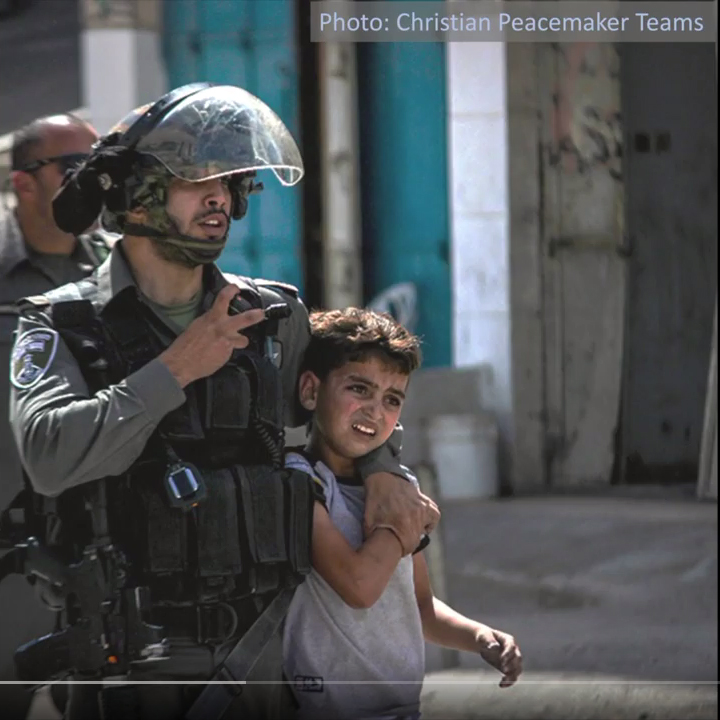 In response to a 2017 General Synod resolution calling for an end to the human rights violations and violence surrounding Palestinian children living in the occupied West Bank, a new UCC video resource has been released to help church members better understand the issues and become advocates for justice.

“How Are the Children Now?” is a two-part video resource produced by the UCC Palestine Israel Network (UCCPIN) that is geared toward adult church school classes. Released in December, it is the culmination of a 7-month process to develop an educational resource to fulfill the Synod resolution’s mandate that local churches “learn about the plight of children in Palestine and the State of Israel” and foster continued community and interfaith partnerships to advocate for the rights of children.

“However we view the Palestinian-Israeli conflict, this resource sheds light on the policies harmful to children carried out in the night and hidden behind the walls of military prisons,” said the Rev. John H. Thomas, former UCC general minister and president and retired professor at Chicago Theological Seminary. “As citizens of the United States, the largest funder of Israeli military operations, this film reminds us of our complicity in policies harmful to children that are in direct violation of international conventions.” 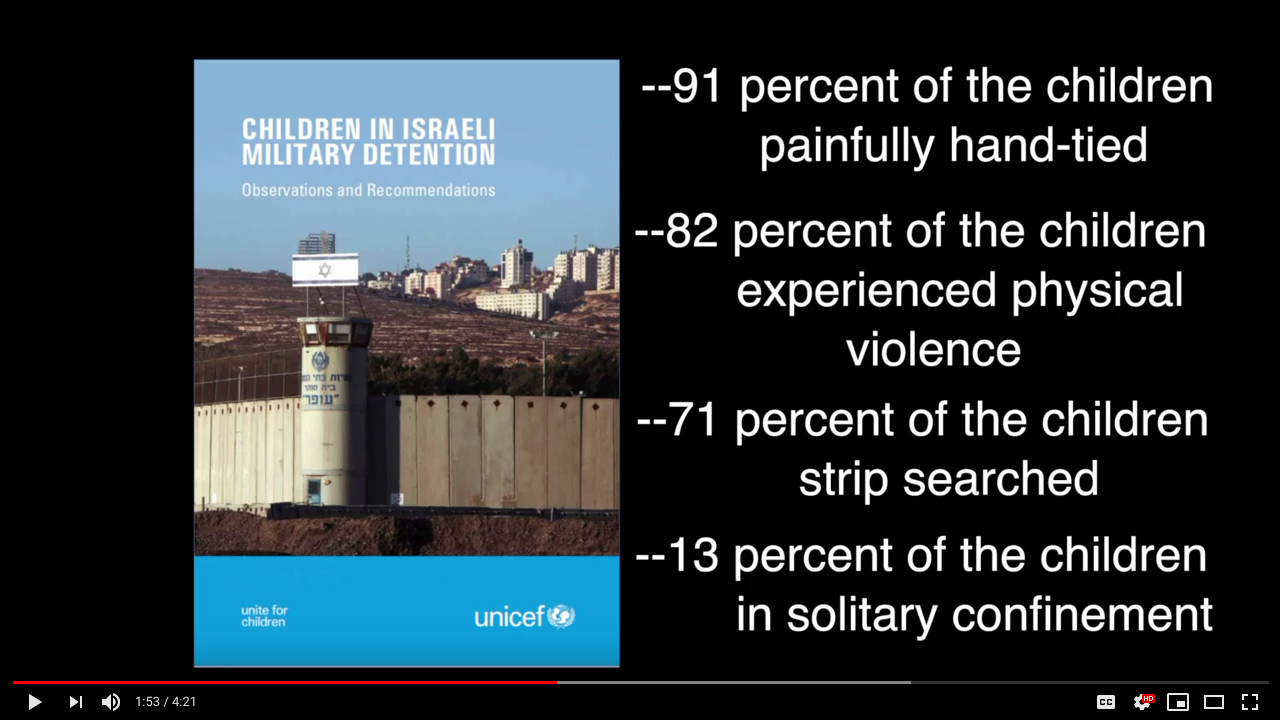 At issue is the biased treatment of Palestinian children. According to Defense for Children International-Palestine, some 500-to-700 Palestinian children are arrested by Israeli military personnel each year. Rather than being processed through civil courts like their Israeli counterparts, these children are charged with crimes and prosecuted in a military court system. Often, the children are separated for extended periods from their families, beaten, and denied other basic human rights.

“The Israeli human rights organization and Global Ministries partner B’Tselem has documented that military law enforcement on the West Bank denies minors basic protections as required by both international and Israeli law, leading to the systematic abuse of children,” said the Rev. Jim Moos, UCC associate general minister for global engagement and operations. “Jesus said that it would be better to have a millstone hung around the neck and be cast into the sea rather than to cause even one of these little ones to stumble. We have a moral obligation to leverage our support of the state of Israel to ensure that the mistreatment of Palestinian children ceases and that justice be accorded to all.” 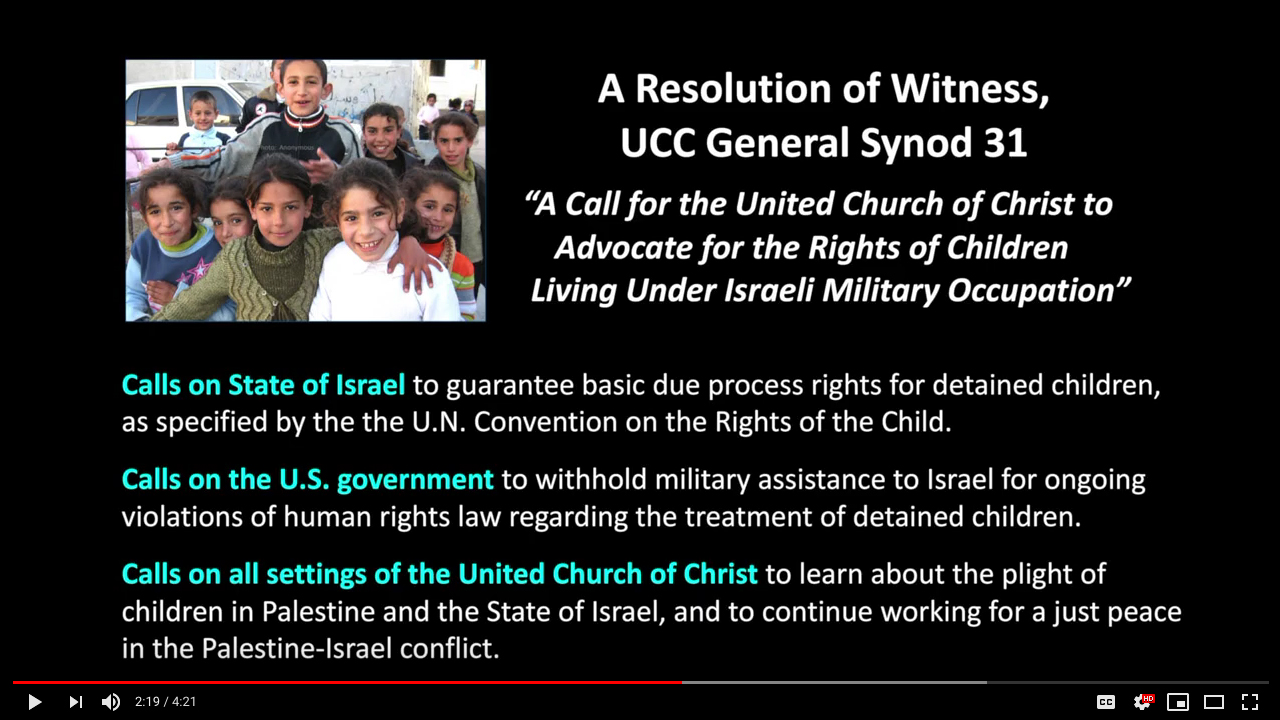 The “How Are the Children?” curriculum includes opening and closing prayers, a guide for discussion of the video, and a series of action steps church members can take to study, contribute, and advocate for a change in the treatment of the detained children. The video is centered around statements from several UCC leaders, including Moos; the Rev. John Dorhauer, general minister and president; the Rev. Traci Blackmon, associate general minister for Justice and Local Church Ministries; Peter Makari, area executive for the Middle East and Europe; and the Rev. Loren McGrail, a former Global Ministries mission worker in Palestine.

“This resource will help educate about the reality of occupation, and the two-tiered legal system that exists,” said Makari. It “provides insight, visual images, and perspective to help continue to unmask the occupation: and “promotes a narrative of equal rights, justice and peace, and a responsible role for engaged citizens and church members.”

For Dorhauer, the video resonates with his own experience of traveling to the Middle East. “Two recent trips to Palestine make me deeply aware of the cost of occupation to the children,” Dorhauer said. “The stories of their suffering are heartbreaking. We owe it to them to learn all we can about their plight, and to then lift up our voices to become agents of transformation so that their hope is not in vain. This video, in response to a Synod action, is a much-needed resource to help up gain some insight into a place where children live very vulnerable lives.”

Blackmon sees the video as one way to help set the story straight regarding biblical teaching. “We are living in a time when people of faith are increasingly bombarded with the misapplication of sacred text to justify harmful and hateful political acts against others,” she said, “whether these acts are done on U.S. soil or elsewhere in the world, they threaten our connection to each other and our covenant with God. They threaten the safety of our children, the stability of our families, and the well-being of communities.”

In addition to fulfilling a portion of the Synod resolution, the video resource also asks viewers to ponder the meaning behind the UCC’s 3 Great Loves, particularly its Love of Children emphasis.

“The love of children must be far more than sentimental affection; it must also be a tough-minded resolve to protect them from harm and abuse, and to ensure their thriving,” Thomas said. “Ending the military detention of children by the government of Israel and upholding the UN Convention on the Rights of the Child send a powerful signal that the United Church of Christ is willing to put action behind its 3 Great Loves campaign.”

“How Are the Children?” is designed so that individuals leading the sessions do not have to be experts in the conflict. A planning guide on the resource website offers step-by-step instructions for leading a successful viewing and discussion.

“We hope people will gain a new-found understanding of what’s happening to the children of Palestine and their families,” said Tom Beilman, UCCPIN member who organized the creation of the resource. “We hope that class participants will find determination to take next step — to learn more, to contribute, to advocate. And to do this not just as individuals, but in partnership with their UCC congregations, committees, and conferences.”

“Whether on the southern border of the United States or in the West Bank, children should not be violently separated from their parents, denied adequate legal counsel, subjected to excessively long detention, or coerced into confessions written in a language they do not understand,” Thomas said. “This video exposes the reality of life for Palestinian children and offers UCC members a way to respond.”

Blackmon concurred. “Our sacred texts teach us that all of life is sacred. By bringing awareness of the horrors of Palestinian occupation to the forefront of our consciousness, UCCPIN continues to impress upon us the urgency of our Christian mandate to promote justice both at home and abroad.”

Watch the “How Are the Children?” Trailer.