The U.S. Army Corps of Engineers has announced its intention to issue a permit for the construction of the Dakota Access Pipeline under Lake Oahe. This pipeline permit route jeopardizes drinking water and desecrates sacred burial grounds of the Standing Rock Sioux Nation. The Army Corps also stated that they would grant the easement without completing an Environmental Impact Statement (an inclusive project evaluation process that allows for public input). 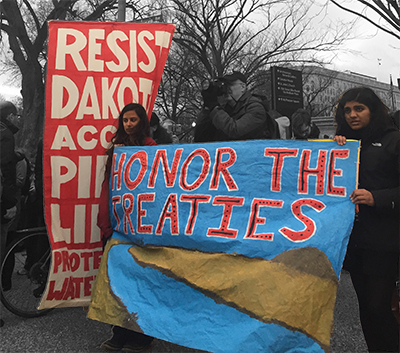 Last December, the U.S. Army Corps found that an Environmental Impact Statement was necessary to determine the safety and environmental impact of the pipeline’s construction. Today’s announcement circumvents this legal process while jeopardizing the health, cultural, and religious rights of our Standing Rock brothers and sisters. The announcement comes only two weeks after President Trump issued a Presidential Memorandum instructing the Corps to expedite the permit.

The Department of Defense has direct jurisdiction over the U.S. Army Corps of Engineers. Your ongoing pressure has been essential in this fight so far. Will you make one more call?

Act Today: Call Secretary of Defense James Mattis and urge him not to grant the easement without a full Environmental Impact Statement that properly consults the Standing Rock Sioux Nation and upholds treaty obligations.

NOTE: As of 10pm ET Tuesday, we heard the DOD voicemail box was full. If you get a message that voicemail is full, please try to get a human on the phone by dialing another extension during business hours, and/or email the Army Corps: https://www.army.mil/contact/

Once you've made your call to the Department of Defense, consider following up with a message to the Army Corp and Congress. You can use our tools to send them an email, Tweet or Facebook Post.