A scholar with a passion for justice 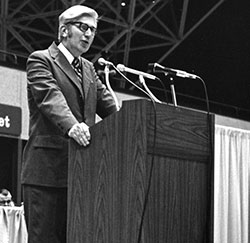 During the 1960s, issues of race and war and gender were churning. There had been two assassinations, and riots. In 1969 when the United Church of Christ elected a seminary professor from central Pennsylvania to be its new president, people were surprised, and some were skeptical.

But Robert V. Moss, skilled biblical scholar, civic leader, educator and ecumenical visionary, did not disappoint. At his inauguration he symbolically wore a stole of heavy chains, worn by a slave, to affirm his commitment to keep the UCC focused on justice.

Moss’ passion for social change flowed from his understanding of the church as the body of Christ constantly developing, growing and changing in each generation. He challenged the denomination to speak and act on such issues as: amnesty for conscientious objectors during the Vietnam War, helping veterans with addiction problems, PTSD and job needs; supporting expanded opportunities for women in church and society; redistributing wealth to aid developing nations; standing in solidarity with the United Farm Workers in California, and promoting racial and economic justice. One of his most controversial actions was his use of denominational funds for the legal defense of nine black men and one white woman convicted of promoting racial disorder in Wilmington, NC in 1971.

Born in North Carolina in 1922, Moss graduated from Lancaster Theological Seminary and was ordained in 1946. After earning a doctorate in New Testament at the University of Chicago Divinity School, he became a professor at Franklin & Marshall College and later at Lancaster Theological Seminary. From 1957 to 1969, while serving as president of the Seminary, he was involved in many civic, ecumenical and educational organizations.

Moss died in office in 1976. In the 1950s he was on the Commission that drafted the original UCC Statement of Faith. Near the end of his life he wrote a revised version in an effort to make it more inclusive. The Moss version was never formally adopted by the General Synod, but it is still used in many congregations.