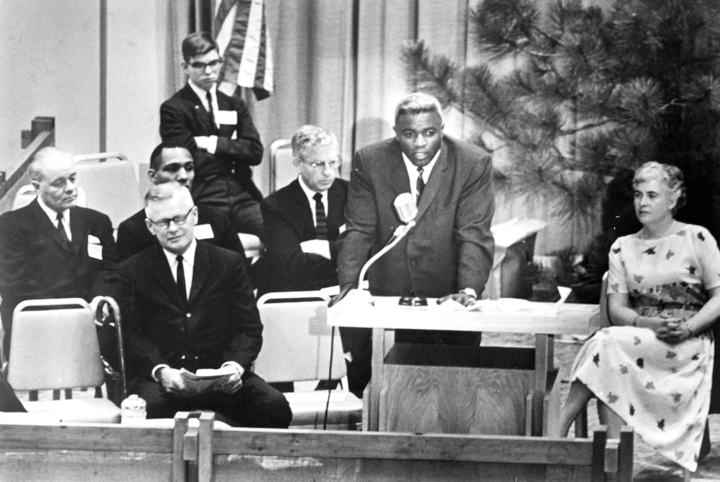 In the early 1940s United States baseball was segregated--African Americans and whites played in separate leagues. But the president of the Brooklyn Dodgers (Branch Rickey) set out to integrate Major League Baseball (MLB). Rickey knew that the first black player needed to have more than athletic skills. He needed to be a man with personal strength to endure racial slurs and insults, and not fight back.

Harassment was ugly at the beginning. Some teams refused to play against the Dodgers and several of his teammates threatened to sit out. Yet, Robinson was an extraordinary athlete, opening the door for other African American players.

What most people do not know is that after retirement in 1957 Robinson became an executive for the Chock Full O’ Nuts coffee company and helped establish the African American owned Freedom Bank. He became a civil rights activist, lobbying for greater integration in sports.

In 1963, as a member of North Congregational Church in Stamford, CT, he was awarded the "UCC Churchmanship Award," and gave a short speech at the Fourth General Synod in Denver, Colorado.

Robinson told a story: A young African American boy who did not know about segregation showed up at an all-white church wanting to go to Sunday School. When he was told it was impossible, he sat down on the steps and started crying. Soon God came by and asked the boy what was wrong. When the boy told him, God sat down and began to cry, too. Why? Because God had been trying to get into that church for many years.