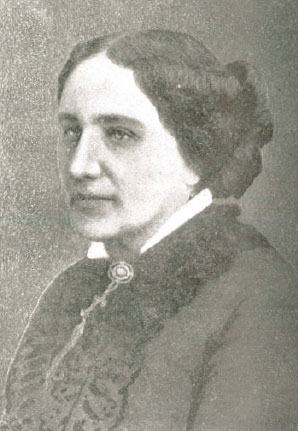 She Changed Lives and Language

Ellen G. Gustin was a serious, prim and proper Victorian woman. But she was much more.

Part of the small but radical Christian denomination, in 1877 Gustin preached a series of revivals at the Broad Street Christian Church in Westerly, Rhode Island.  She caused such a commotion that her preaching got national attention in the denominational newspaper, the Herald of Gospel Liberty. Soon thereafter the congregation called her to be their pastor.

Gustin was the third woman to receive full ordination in the Christian denomination. It seems that her authorization, in September 1869 by the Rhode Island and Massachusetts Christian Conference, sparked the first known case of a denomination changing language to make its documents gender inclusive.  Immediately after approving Gustin, the Conference took a second vote "to alter the constitution so that the feminine gender be coupled with masculine wherever it occurs."

Ellen G. Gustin served over twenty-three years as a pastor to three churches. For decades she was the only ordained woman in New England.  She was passionate about Foreign Missions. In 1886-7 the American Christian Convention launched a Woman's Board for Foreign Missions and sent a female missionary to Japan. Gustin was Corresponding Secretary and later its President.

In her 1902 report to the national Convention, almost two decades before women gained the right to vote, Gustin linked mission enthusiasm with her passion for women's rights. She spoke of women scientists, authors and those in "halls of legislation, the professions of law, medicine, and theology [where women] have had their honored representatives." She insisted that there was "no more encouraging sign of greatness of a people, community, state, or nation socially or politically, than the elevation of its women."

The United Church of Christ celebrates and supports women in church and society. Let us remember the life and witness of Ellen G. Gustin.