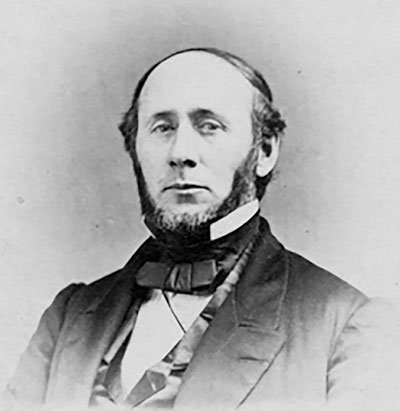 The "Father of Oregon Schools" was a New England Congregationalist

It was October, 1847, when George and Nancy Atkinson, commissioned by the American Home Missionary Society, set out from Boston for Oregon. They did not follow the established Oregon Trail. Rather they sailed on a ship (the Samoset) to Honolulu and then on another ship (the Cowlitz) to Fort Vancouver on the Columbia River in Oregon Territory. At the end of their journey they endured a two-day river voyage to Oregon City.

The Atkinsons went by sea because their baggage included a heavy $206 packet of public school textbooks for Oregon schools. Atkinson was an educator who promoted education and ordered hundreds of books. He was also a remarkable teacher, teaching nine sailors to read during his long voyage to Honolulu.

Atkinson's leadership in the Pacific Northwest spans four decades. He drafted the language passed by the legislature to establish the territorial school system. He served as school superintendent in two counties, publishing bi-monthly reports in the region's largest newspaper. He started four secondary academies for teacher training, and actively recruited teachers from the East.

Oregon was far from the heart of New England Congregationalism. Yet Atkinson made eight long trips back East to promote Oregon missions, schools and businesses. He remained involved with the church, attending national Congregational meetings in Albany, Boston, St. Louis and Oberlin.

Education on the Western frontier was rarely high priority in the 1800s.  In Oregon, however, George Atkinson made it central. From his arrival in the 1840s to his death in 1889, his strong educational leadership prevailed.  Read more about Atkinson in two books researched and written by the former UCC Conference Minister of the Central Pacific Conference, Donald J. Sevetson.  Atkinson: Pioneer Oregon Educator (Createspace, 2011) and A Public Spirit: George Atkinson's Written Legacy (Pacific University Bee Tree Books, 2015).  Both books are available through Amazon.