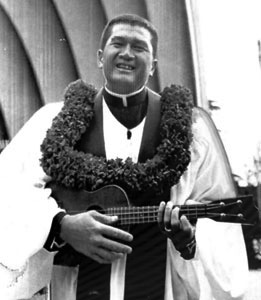 The Spiritual Leader of Hawaii

It was Palm Sunday, the Sunday school students processed down the long aisle of the church carrying canned goods to be placed in coconut woven baskets around the altar. The organ played "Hosanna, Loud Hosanna." As the children neared the altar, a five-year old boy saw a large figure in a white robe and black stole. Fear and trembling overtook him, and suddenly he shouted out, "He Akua!" "It is God!"

Actually, it was Abraham Akaka, minister of Kawaiaha'o Church in Honolulu established by missionaries to Hawaii in 1820, and I was that five-year old, awed by this much loved Hawaiian pastor.

Abraham Kahikina Akaka, born in 1917 in Honolulu, was one of seven children in a family that placed God at the center of their lives, beginning each morning with 'ohana (family) devotions.  In 1939 Akaka attended the World Conference of Christian Youth in Amsterdam, Holland at the height of Hitler’s power.  It was a turning point in his life, calling him to ministry.

After completing his studies at Chicago Theological Seminary Akaka returned to serve churches in Hawaii—and eventually was pastor for 28 years at the famous Kawaiaha'o Church.  Kahu Akaka, as he was called, composed poetry and music, and led protests for civil rights and peace.  He was revered as the spiritual leader of Hawaii, insisting that the Aloha State had moral and spiritual contributions to make to the nation and the world.

'God is Aloha.' Aloha is the power of God seeking to unite what is separated in the world - the power that unites heart with heart, soul with soul, life with life, culture with culture, race with race, nation with nation.

People asked Akaka to run for political office.  He refused, insisting that he was in the same political party as God, "a bridge between the Republicans and Democrats."