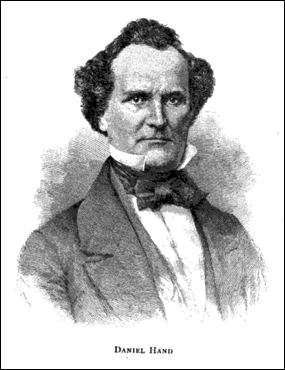 A Gentleman who Cared and Trusted

In 1888 a wealthy New England businessman from Guilford, Connecticut, astonished people in the philanthropic community by giving a small missionary society a million dollars “to establish a permanent fund for the purpose of educating needy and indigent colored people of African descent residing in the recent slave states.” The gift was huge—the equivalent of 25 million dollars in today’s money. It literally changed the lives of thousands of people.

The donor, Daniel Hand, lived from 1801-1892.  He grew up in New England, nurtured by the faith of his Puritan ancestors, and active in the anti-slavery movement well before the Civil War.  His business took him to numerous Southern cities where he saw the needs of former slaves.  People knew Hand as “a man of striking presence, of strong mind and strong convictions, earnest in his modes of thought and vigorous and terse in their expression.”

Many well-meaning abolitionists had similar concerns, but they often remained paternalistic in their donations—setting limitations on how their gifts could be spent.  Daniel Hand gave his money with few strings attached.  He told the leaders of the American Missionary Association (an anti-slavery educational organization founded by Congregationalists in 1846 that continues to inform the work of the UCC’s Local Church Ministries ) to preserve the principal of his gift, but they were free to spend the income from the fund “in any way they wished.”  They could establish schools, maintain existing educational institutions and/or provide individual aid.  Hand’s gift greatly expanded the educational work of the AMA.

People who give charitable gifts make a difference.  Yet, giving wisely is never easy. Daniel Hand cared deeply about the educational needs of former slaves and he trusted the American Missionary Association to use his money wisely.  We continue to be blessed by people like Daniel Hand.