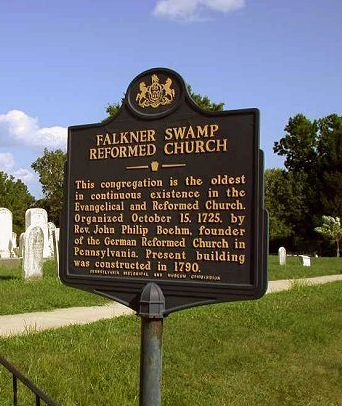 Our Past Shapes the Present

Today historic relationships are being renewed. On May 4, 2017 the worshiping communities of the New York Collegiate Reformed Church became part of the NY Conference of the United Church of Christ, embracing dual standing in the UCC and the Reformed Church in America.

In the 1720s when Reformed German-Swiss colonists migrated to North America and settled in Pennsylvania, they turned to New York City Dutch Reformed settlers for help.

The earliest Pennsylvania German Reformed settlers had no pastors. By 1725 church members in Falkner Swamp, Skippack and Whitemarsh, Pennsylvania convinced a much beloved schoolteacher, named John Philip Boehm, to preach and lead their worship. Boehm, the son of a pastor, was initially reluctant. He was not ordained.  Finally he consented to serve them if the churches organized themselves, developed constitutions and voted as confirmed members. With that grass roots “congregational authorization” he began to lead communion services.  It was not long, however, before later arriving German Reformed pastors attacked Boehm and refused to support his ministry.

For a time Dutch churches in New York and German churches in Pennsylvania worked together to organize Dutch Reformed and German Reformed churches into two regional Coetuses (what we call Conferences).  Later geographic, language, cultural, and economic differences separated the two groups. The Dutch Collegiate churches became part of the Reformed Church in America. The German churches evolved into the German Reformed Church in the United States, and eventually the United Church of Christ.