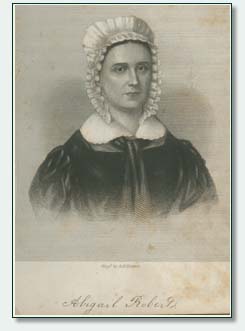 The early 1800’s were a heady time in American religious life.  After winning political freedom from Britain, some Christians condemned all denominational structures and authority as well. Lay preachers, many of them women, drew large crowds at camp meetings, with emotional preaching exhorting people to simplify their faith and live Godly lives.  Using the Bible as their only guide, followers rejected the creeds and structures of established religion.

When Abigail Hoag Roberts, one of these “female laborers” or “evangelists” as they were called, gained a following, the leaders of established denominations were not pleased.  Some thought the only place where women should minister was in the mission field.  They said, “If you are called to preach, why do you not go to the heathen?”  Abigail Roberts responded, “Judging from what I witness, I am right in the midst of them.”

Quick wit and fire to preach a simple Gospel were hallmarks of her ministry.  Like other preachers who were part of the Christian Connection, a group that later joined with Congregationalists, Roberts insisted that “Christian character,” rather than correct beliefs, were the measure of a Christian. She also condemned denominations that squabbled among themselves, dividing God’s people.

From her call to preach in 1814 Abigail worked tirelessly in the lower Hudson Valley, traveling frequently in all kinds of weather and preaching daily in homes, meeting halls, and outdoors – spreading a gospel of love, simplicity and tolerance.  In 1826 Abigail and her husband Nathan left their children with friends and moved to northwestern New Jersey.  There she helped found over 15 congregations, two of which still exist today in Milford and Baleville, NJ.  After 1836, failing health kept her from travelling and she spent her remaining years mentoring others, including her son, Philetus, who became a Christian minister.  She died in 1841.