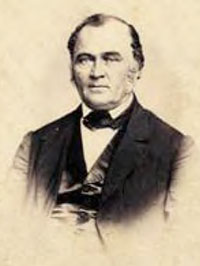 A Ministry to Church and Society

When an immigrant German pastor in the 1850s began a campaign to found a home for children whose parents had died in the St. Louis cholera epidemics, conservative members of his congregation raised their eyebrows at the thought of the expense. "Why pastor, we haven't a thing with which to start an orphans' home." "Oh yes we have," he replied. "We have everything we need, we have orphans." His goal was met in 1858 when the German Protestant Orphan’s Home, now called "Every Child's Hope," (ECH) was born. This institution continues to provide services for emotionally challenged children and youth.

Pastor Louis Edward Nollau (1810-1869) came to the United States from Prussia to do mission work in Oregon. When plans changed, he became pastor of St. Peter's German Evangelical Church in St. Louis.  Nollau understood the needs of pastors serving frontier churches and he led five local Evangelical pastors to found the "Church Society of the West" (the Kirchenverein). The group provided support to clergy and congregations.  Later it became the Evangelical Synod of North America, an important denominational tradition in the history of the United Church of Christ.

"No distinction of creed, race, nationality or color would be made in the acceptance or treatment of patients. Nor was the Hospital conceived as a proselytizing agency, but as a place of refuge for the needy, where poor patients were treated without charge and where everyone was assured of expert medical attention and friendly care."

Today there are many UCC health and welfare institutions that uphold similar commitments through the UCC Council for Health and Human Service Ministries (CHHSM).