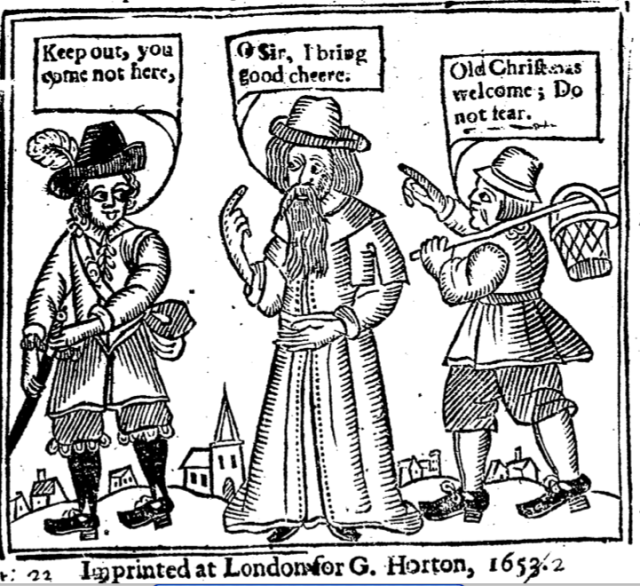 In 1659 the Massachusetts Bay General Court officially banned Christmas celebrations; and anyone caught taking the day off or even ‘feasting’ was liable for a fine. Why? The Puritans’ resistance to Christmas was formed in response to the over-the-top holiday celebrations of the English court. The indulgence in eating, dancing, singing, sporting, card playing, and gambling escalated to magnificent proportions. Cotton Mather, one of the most well-known Puritan clergy, declared Christmas cheer an “affront unto the grace of God.” “Can you in your consciences think that our holy savior is honored by mirth,” he demanded of his flock, "by long eating, by hard drinking, by lewd gaming, [or] by rude reveling?"

Yet Mather had a point. What he and Congregationalists really wanted was a quiet and reflective day. They did not observe special days in the liturgical calendar—Sunday was the day to worship. But they did not object to non-Puritans celebrating Christmas by taking the day off. The problem developed when they went out into the street to play noisy games or shoot off firecrackers. If you are going to observe the day, the Puritans argued, observe it properly. Christmas should not provide an excuse for bad behavior.

After the English King Charles II demanded that the colonists rescind their ruling banning the celebration of Christmas (because it was an affront to royal authority), the Puritans reluctantly complied. Over time, however, New England’s resistance to Christmas became more and more a political statement against the oppressive power of the English. By 1722, when the royal governor tried to get Judge Samuel Sewall to adjourn the Massachusetts Bay General Court on Christmas Day, he refused. Sewall insisted that the colonists had come "a great way" for their liberties, and "We will not," he declared, "allow you to tread on them now." The United Church of Christ carries on this passion for liberty over three hundred years later.