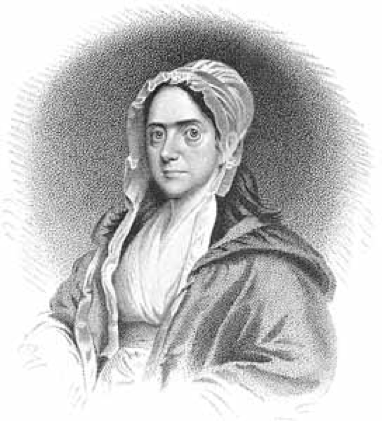 Plunging through the icy waters of a New Hampshire river marked Harriet Livermore's final break with her church. She had grown close to a group of Free-Will Baptists who encouraged her to share her "public testimony for Christ." But, as a covenanted Congregationalist she had to seek formal dismissal from her pastor to be baptized by full-immersion. In January 1823, she took the plunge, insisting later that she was "buried with Christ in baptism."

After her immersion Livermore assumed the name of "pilgrim stranger" and traveled the country as one of many female itinerant preachers who flourished during the revival enthusiasm of the "Second Great Awakening." She spoke in churches, homes, schools, prisons, and fields – wherever people gathered.

She preached often in Christian Connection churches – a radically independent movement that later became part of United Church of Christ history.  The "Christian movement" encouraged women’s leadership in worship, but did not ordain women. Some people rejected women's leadership and labeled Livermore an "enthusiast," "eccentric," or "monomaniac." She responded by writing a tract entitled Scriptural Evidence in Favor of Female Testimony in Meetings for the Worship of God – defending her right, and the right of all women, to preach.

Harriet Livermore (1788-1868) captivated audiences with sermons on the urgency of faith and the impending return of Christ. She considered herself an instrument of God. On four occasions, she preached in the U.S. Congress to legislators, and to overflow crowds of curious Washingtonians.

Like many evangelical women of her generation, male clergy initially encouraged Livermore.  Later, however, male clergy turned against women when revival traditions entered the mainstream. Prohibitions against female preaching increased as the country embraced more conservative views of women after the Civil War.

Harriet Livermore, however, never gave up, remaining a passionate promoter of women in church leadership to the end of her life.