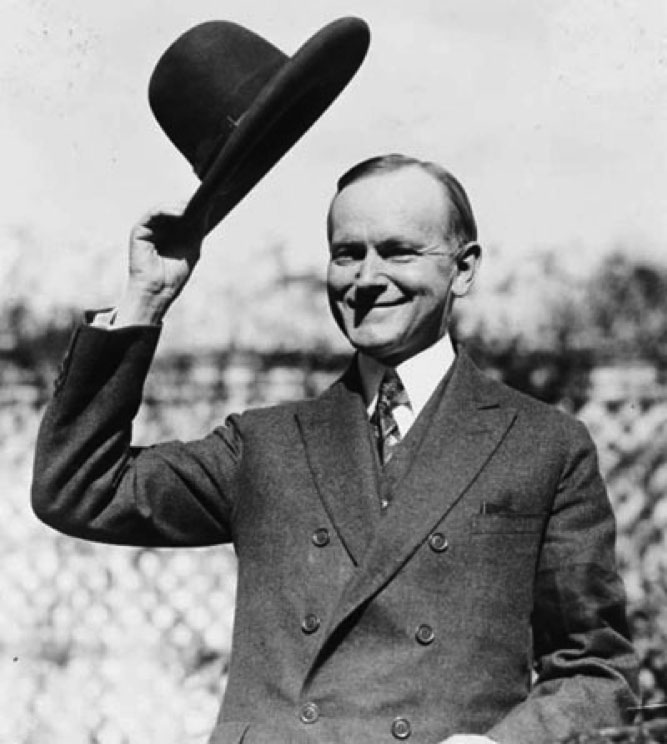 Church-Going as a Witness

In 1923, while visiting his childhood home in Vermont, Vice President Calvin Coolidge learned that President Warren Harding had died in San Francisco on August 3rd..  That night, Coolidge’s father, a notary public, swore the Vice President into office by the light of an oil lamp.

Religion was always part of Coolidge’s life.  Reading the Gospel of John helped him learn to read.  Prayer sessions were common in the Coolidge home.  As an adult, Coolidge worshiped in various Congregational churches.

“Silent Cal,” as he was called, was President during the Roaring Twenties.  He is remembered for promoting laissez-faire economics and cleaning up government corruption.

Initially Coolidge was hesitant to join a church, not feeling he was worthy. However, shortly after he became President, he and his wife went forward to receive communion and were soon thereafter welcomed as members.  When the National Council of Congregational Churches held its national meeting in Washington, Coolidge agreed to be “honorary moderator.”  Faith sustained Coolidge when his son died in 1924.  Faith may have led Coolidge, in humility, not to seek a second full term as president in 1929.

Calvin Coolidge was not an ostentatiously religious man.  He did not promote his faith.  He did not profess Christianity to get votes. He lived a life of quiet, genuine faithfulness.  Yet, by choosing to join First Congregational Church in Washington, DC in the 1920s, he made a powerful witness to an inclusive understanding of the community of God.