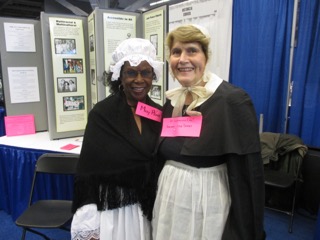 Anne Hutchinson, a Puritan rebel, told us about how she challenged church and political leaders in Boston in the seventeenth century.

Another General Synod visitor was Mary Peake, a dynamic African American woman who secretly started teaching slaves to read and write in the back of her dress shop during the Civil War. She was eventually hired by the American Missionary Association, an abolitionist organization founded by Congregationalists.

Women in the German Reformed Church also pioneered in mission work. At General Synod we welcomed Alliene Saeger DeChant, a Pennyslvania missionary who spent time in Japan. At General Synod, we talked with Sister Lydia Daries, an Evangelical Deaconess in St. Louis during the late nineteenth century. She told us about all the remarkable medical and human services carried out by Evangelical Deaconnesses.

And finally we conversed with Emma Newman, a nineteenth century frontier Congregational minister, and Hulda Niebuhr, the older sister of the well-known Niebuhr brothers. Emma Newman, educated in New England, went West and served churches in small towns on the prairie frontier. Hulda Niebuhr, part of a strong German Evangelical family, told us about her work in Christian education during the first half of the twentieth century.

The United Church of Christ Historical Council invites you to sign up for "UCC ROOTS" –monthly emails about these women and other people, places and events in UCC history. Click here to subscribe and continue receiving these emails monthly!