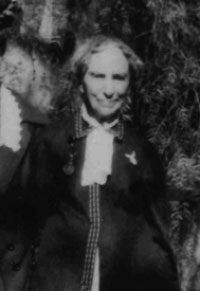 In March 1883 Emma Newman, alone in the middle of the prairie, was driving her one-horse buggy along an iffy road from West Kentucky to Dial, Kansas.  That 100 mile journey multiplied because she had to go off-road where ranchers fenced their land.  Emma had preached her last sermon in a little church near Dodge City where the American Home Missionary Society (AHMS) encouraged her ministry.  But her congregation dwindled to four cowboys from a temporary camp nearby.  Now she was on her way to a new call in Dial, Kansas. The potential for church growth there was unknown, yet she was successful, serving the Dial church for six years. The church lasted until the 1930s when numerous small towns disappeared during the depression.

Emma Newman (1838-1921) was a frontier pioneer.  As far as we know, she was the first Congregational woman licensed to preach (granted by the Northwestern Kansas Association in 1883).  A few women had been ordained by the 1880s, but women were not licensed.  Emma’s father was a Congregational minister in New Hampshire.

Andover Seminary in Massachusetts did not admit or grant degrees to women, but Emma felt a call to ministry and was allowed to attend as a guest.  With that education she served small struggling churches in Illinois, Kansas, and California where qualified clergy were scarce, communities fragile, and churches regularly came and went with economic booms and busts. She survived by living off dividends from inherited railroad stock and fees she received as a skilled practitioner of homeopathic medicine.

In 1884 the Dial Church requested her ordination. The Association met; she had a unanimous vote; but the American Home Missionary Society, sponsored by Congregationalists back East, resisted.  The AHMS Superintendent said that the Society would not support a church that called a woman pastor.  Emma was practical.  She withdrew her request for ordination and sought licensure instead.  Somehow this arrangement was acceptable.