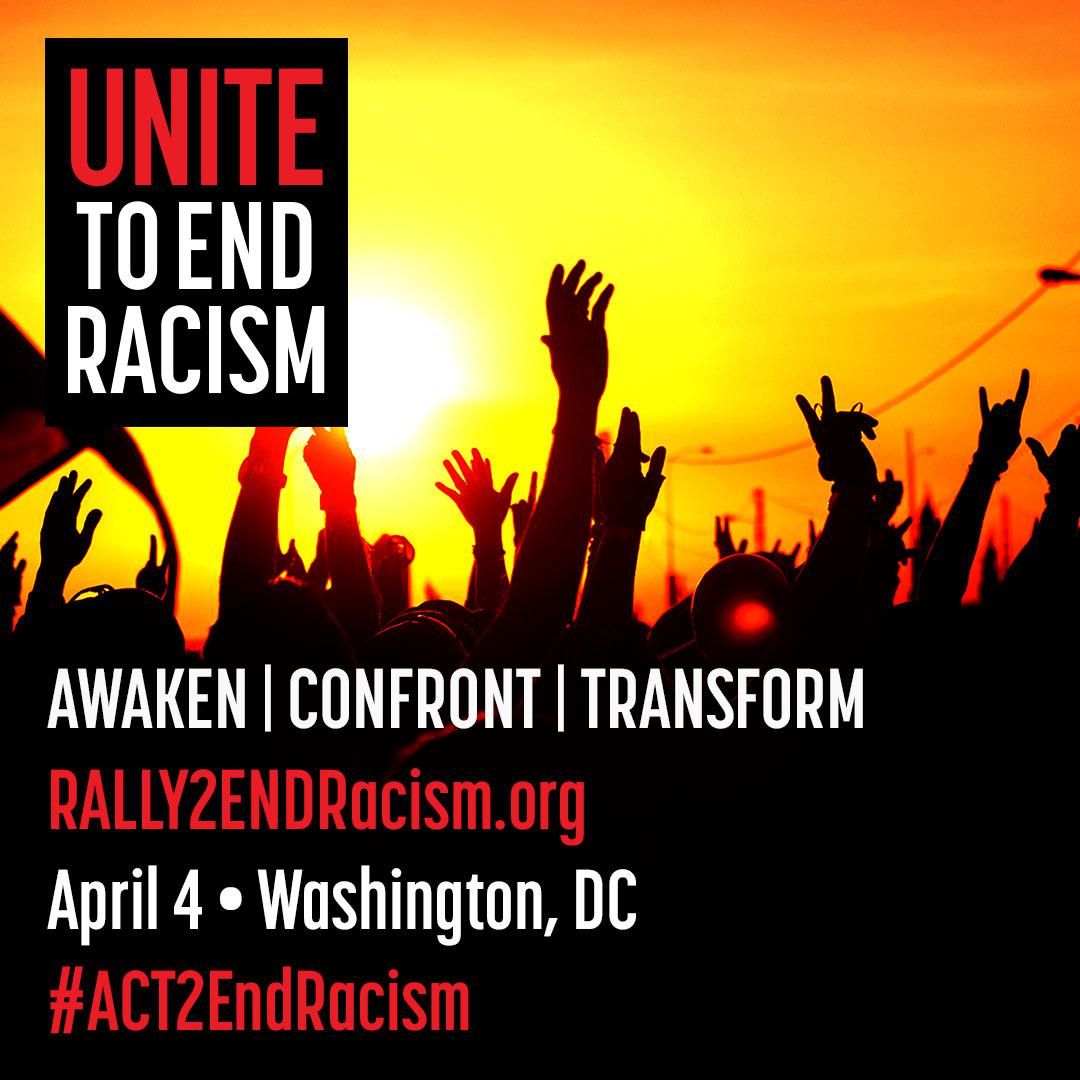 As the Rev. Dr. Martin Luther King, Jr. challenged America to confront and eliminate racism, a new generation of faith leaders is stepping up to do the same. The national movement kicks off with a rally to end racism on Wednesday, April 4 in Washington D.C. on the National Mall.

“After a year of planning, the National Council of Churches is proud to sponsor and organize a movement to ACT NOW to End Racism. The multi-year effort launches with our gathering at the Mall to commemorate the 50th anniversary of Martin Luther King, Jr.’s tragic death,” said the Rev. John Dorhauer, UCC general minister and president and co-chair of the NCC’s Truth and Racial Justice Task Force. “We fully intend for this to broaden the movement to end racism in our time.”

“We have for too long lived under the scourge of racism in our society,” said Jim Winkler, president of NCC. “To begin the process of healing our nation, we as Christians must join with people of all faiths in holding ourselves accountable for our complicity, and commit to righting the wrongs.”

NCC and its coalition of over 50 partners see that the faith community and those of moral conscience have a specific responsibility to address and eliminate racism, with unique gifts that enable them to do so. “As we look at our society today, it is painfully evident that the soul of our nation needs healing,” said Bishop W. Darin Moore, chair of the Governing Board for NCC. “We must not only pray, but take concrete action to realize and achieve racial and social justice, and we cannot possibly put an end to racism unless we commit to change at all levels — including within the faith community.”

The United Church of Christ plans a major presence on the Mall and in the ACT Now to end Racism movement. This strong witness for ending racism begins Tuesday evening, April 3, at Saint Sophia Greek Orthodox Cathedral with an ecumenical worship service at 6:00p.m., followed by an ecumenical gathering ‘End Racism: Then and Now.’

Wednesday morning, April 4, a silent prayer walk at 7:00a.m. begins at the Martin Luther King Jr. Memorial and ends at the National Mall in an interfaith prayer service. Organizers suggest that UCC members wear blue—the colors of UCC ‘Just World for All’ logo— and assemble at Ohio Drive near the MLK Memorial to walk as a group. The denomination will be hosting a tent located on the Mall between 12th and 14th Streets, where advocates can gather as one united church. The ACT to End Racism rally begins at 9:00a.m., continuing until 3:30p.m.

First Congregational Church UCC, located at 945 G Street NW just 5-7 blocks from the National Mall, is offering an extravagant welcome to UCC attendees before and immediately after the rally.

Thursday, April 5 is slated for advocacy and action.

“Christian churches, present in every town and community across the country, are both part of the problem and the solution,” said Rev. Sharon Watkins, Director of the Truth and Racial Justice Initiative for NCC. “NCC and our partners are committed to addressing the systemic evil that many Christians and church institutions have yet to fully acknowledge.”

“It has been an honor to work with faith leaders across this country to plan this,” Dorhauer said. “To do our part to build a just world for all, a world dreamed of by Martin.”

Bookmark this page for the latest information on the UCC gathering.

The rally is open to all people of faith and moral conscience. To learn more about the rally, visit: www.rally2endracism.org.

For those unable to attend the ACT Now! To End Racism march, the rally will be streamed to the ACT Facebook page  via Facebook Live, and embedded in the rally2endracism.org web page.