Some take to the streets at night wearing gas masks and helmets marked “clergy witness.” Others welcome medics and protestors into a church hall for respite. Still others have signed an online Black-Indigenous-people-of-color statement condemning U.S. police violence or petitioned the mayor to resign. Many carry signs in family-friendly daytime marches. 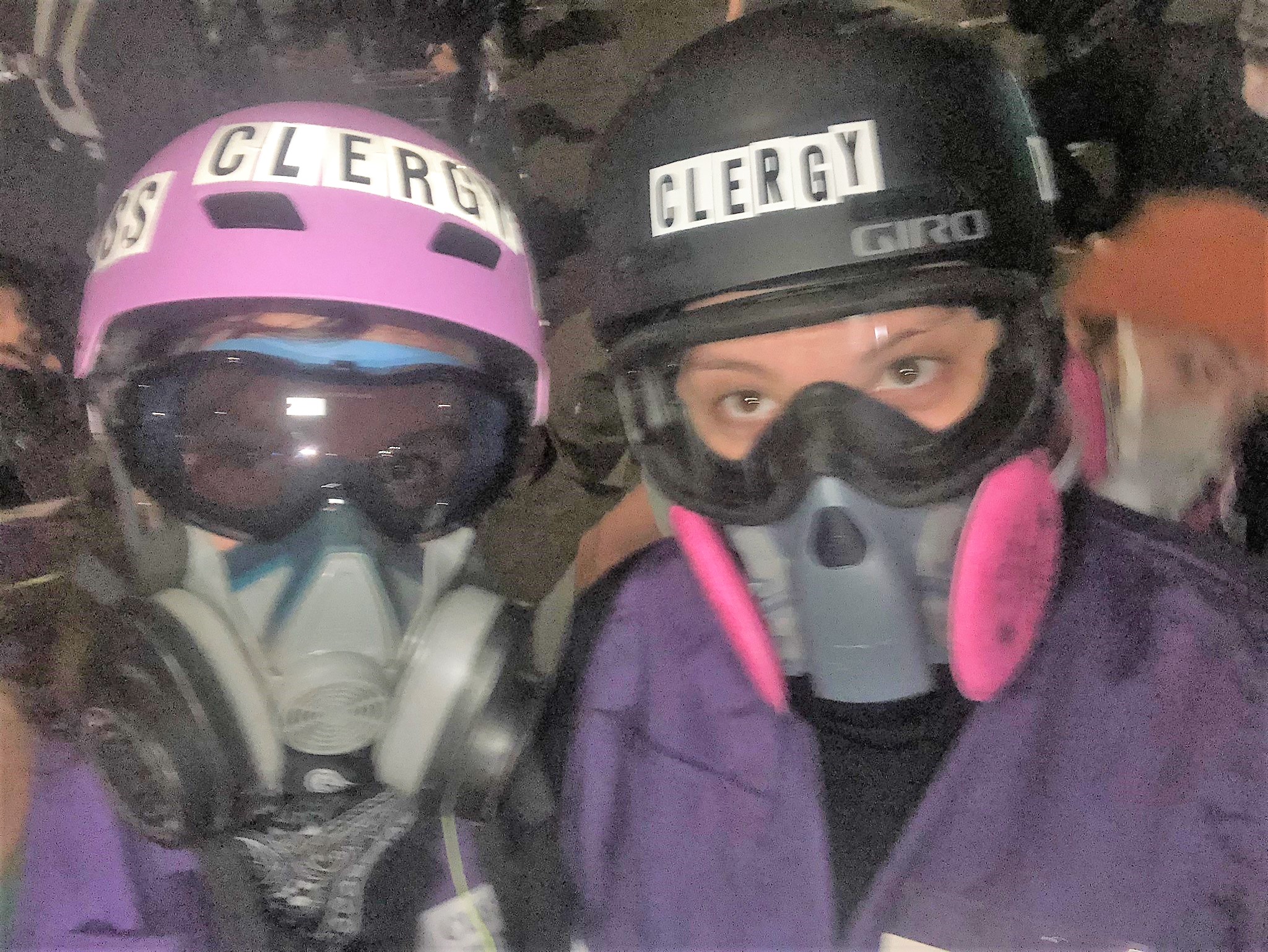 All are United Church of Christ people – pastors and lay members – responding to this summer’s daily protests in Portland, Ore.

Prompted by the May 25 killing of George Floyd at the hands of Minneapolis police, the Black Lives Matter-led demonstrations have passed their 100th day in a row. They started nonviolently and mostly remain so, UCC observers say.

Most news reports from Portland show images of graffiti, fireworks and dumpster fires issuing from the pent-up anger of some demonstrators, and the violent response of police, who use tear gas, pepper spray, flash grenades, rubber bullets and other projectiles. But what many UCC members  closest to the action have noticed – in addition to a clear cry to end police violence – are marks of mutual caring and kindness in the diverse, loosely organized community of protestors.

Just blocks from the small downtown site of the most intense nightly demonstrations, First Congregational UCC has opened a medic station where protestors and the volunteers supporting them regularly come to lay their physical and mental burdens down. (Click here to read about it.)

But much of the UCC witness is happening out in  the streets.

One group of participants is a handful of UCC ministers who take turns in pairs each night  wearing gas masks, “clergy witness” vests and helmets along with colleagues from Portland Interfaith Clergy Resistance. “We think of ourselves as a movement of chaplains who are there to be a moral witness to the brutality of the state and systematic racism,” said the Rev. Sara Rosenau, pastor of Waverly UCC (pictured, in the purple helmet). “We’re wanting the police to see us there as representatives of Christian, Jewish and some other faith traditions.”

Rosenau said she has taken part in nonviolent direct action in a ministerial and academic career in other states as well as Oregon. Often, in the process, she has talked to police officers. This summer that’s not been possible with either the federal or local officers involved, she said.

“They remain very distant until they decide to move in and disrupt,” Rosenau said. “That’s when they’re often violent,” with batons and projectiles wielded from behind militarized gear and shielding. “To me it feels like they are hiding behind a kind of wall of immunity or wall of protection, with an unwillingness to really engage,” Rosenau said.

“I understand that people feel like they’re doing their job, and in many ways all of us are caught up in a racist system with roles to play,” she said. “I don’t condemn any individual police officer. But this is a system that has propped up white supremacy from the very beginning, and it needs to be reformed.” She said she would like to see more public funding for forms of care other than policing to address mental health, poverty and other root causes. “The whole system needs to be rethought,” she said.

“The first thing that I’m looking for from our public officials at every level – the city commissioners, the mayor, the head of the police department – is to correctly name the problem,” said the Rev. Tara Wilkins, pastor of Bridgeport UCC. “It would be wonderful if we could just hear someone say, ‘You’re right, we have behaved with bias against people of color and we need to correct our systemic racism.’ Nobody even takes ownership.” 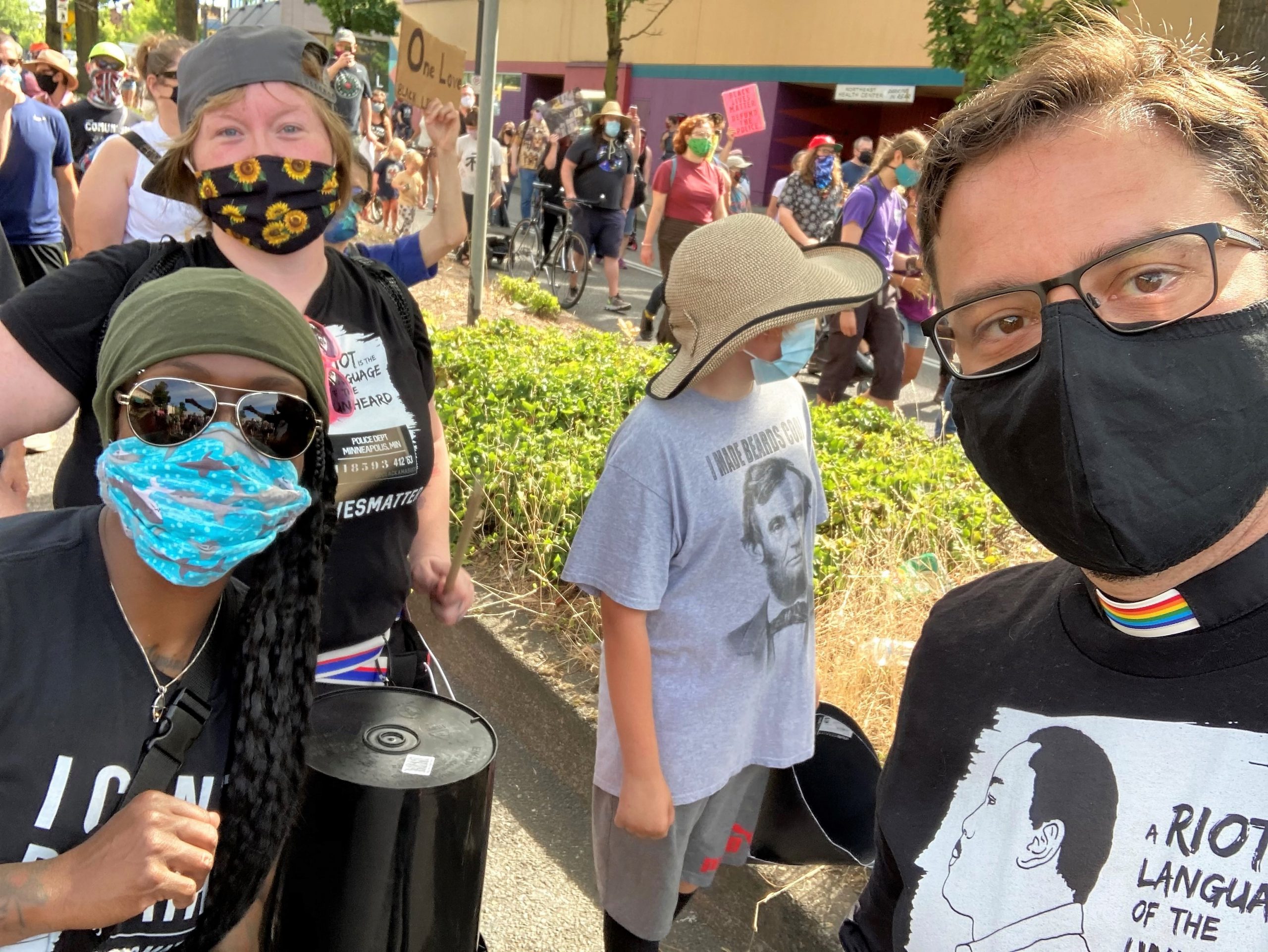 Wilkins has been part of Interfaith Clergy Resistance since it started in 2016, after ministers and others witnessed Portland police treat people of color more violently than white people. “At that time we were shocked, and said we needed to do something to use our voices and credibility as clergy to call them into accountability.”

In addition to supporting protestors and their right to speak out, some of the clergy work for change in city government – testifying at council meetings, for example. Wilkins said an end to “qualified immunity” that protects police officers would be one concrete step. “Police come before review when they’ve shot a Black person or brown person and they’re never found guilty,” she said. “So I say there’s something wrong with the system.”

Also supporting the call  for police budgets to be reexamined in Portland and Pacific Northwest cities is an ecumenical BIPOC Faith Leaders and Laity Council for #BlackLives, including Rev. Cecil Prescod, minister for faith formation at Ainsworth UCC. Their Aug. 24 statement said, in part, “We believe that God is with the protesters. We stand in solidarity with them.”

The Rev. Chuck Currie, who blogs and posts frequent social-media messages on justice issues, took to Twitter Aug. 30 with a petition calling for a different Portland police commissioner. He said JoAnn Hardesty, Portland’s only African American city commissioner, should be appointed police commissioner, a position currently held by the mayor.

“Portland Mayor @tedwheeler has failed in his duty,” tweeted Currie, who lives in the city and recently retired as chaplain, professor and director of the Center for Peace and Spirituality at UCC-related Pacific University in Forest Grove. “He must step down as police commissioner immediately and appoint @JoAnnPDX to the post, as hundreds of Portlanders have asked. If Mayor Wheeler is unwilling to do this, I call on him to resign. Tonight.”

‘They love this community’

Alongside the news covered  on TV are what Wilkins called “parallel stories to be told.”

“Many of these young people, people who have been unheard, are out night after night,” she said. “There is a solidarity and a community. There is a spirit very much of almost a festival. People are feeding each other, passing out masks and hand sanitizer – nobody goes hungry at these gatherings. There are medics. You can get riot gear for protection if you need it. There is this sense of purpose, a sense of solidarity  in speaking out and telling the story nobody’s telling.

“The history here in Portland is not unlike other places. Oregon has this horrible, racist past and present and the Portland Police Bureau is an extreme example of a police department that uses militarized tactics when they should be doing community policing and community support.”

“What I have seen in Portland is the majority of people are out there with a deep love for their community,” Rosenau said. “A couple of days ago, people organized to clean up the neighborhoods where they had been protesting.

“They’re doctors, lawyers, car mechanics and business owners, and they are putting their life on the line on a nightly basis because they love this country and they love this community and they want to live in a world where all people are able to live without fear.”

Some ‘can’t be out in the streets’ 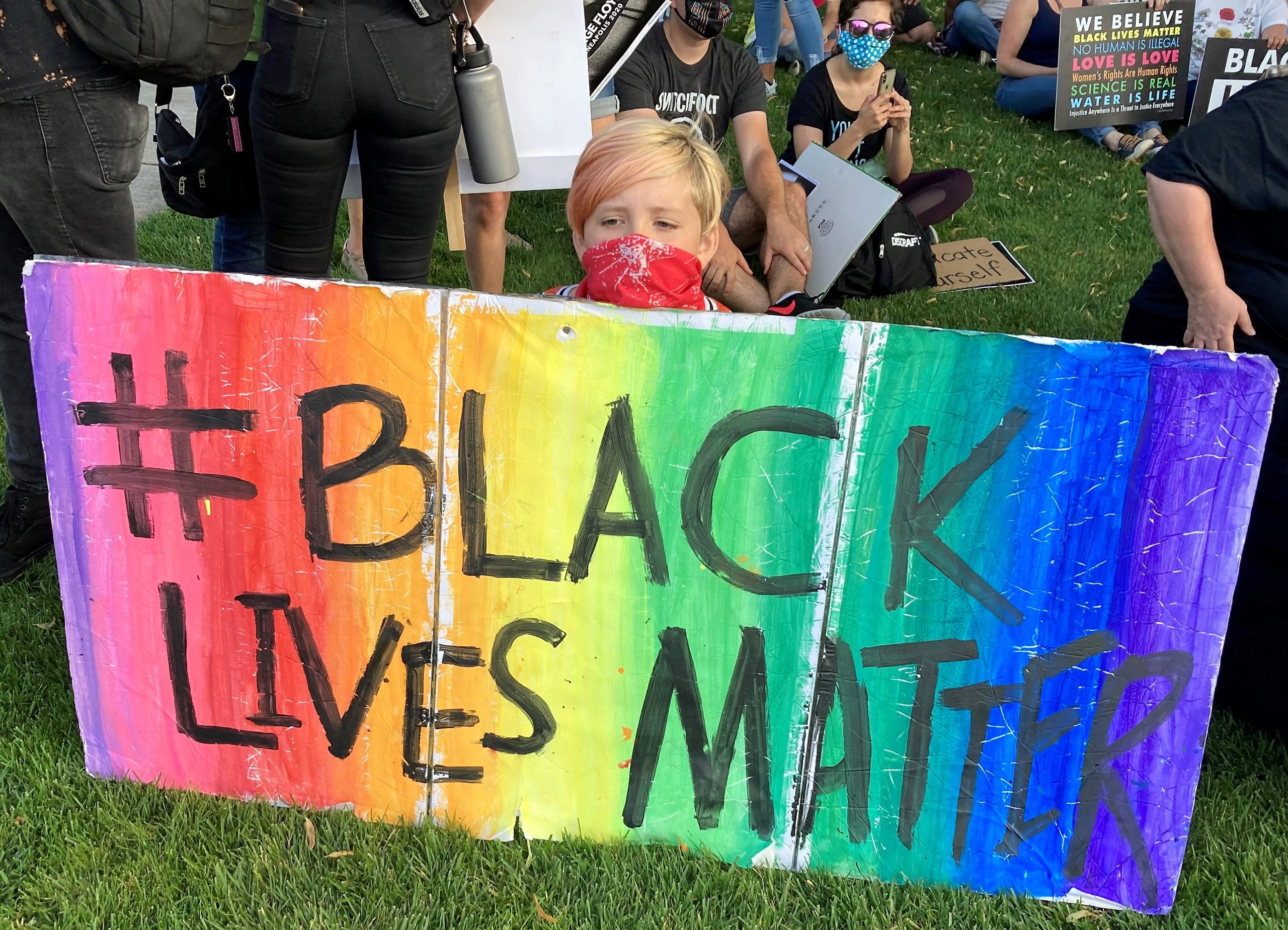 Some members of Clackamas UCC in nearby Milwaukie, including the Rev. Adam Ericksen (pictured in middle photo), have braved teargas at night but also have been to calmer daytime marches that rarely make the news (a young person taking part in one of them is pictured at right). “Portland has been called a ‘war zone’ and even ‘worse than Afghanistan,’” Ericksen said, but “during the day, it is pretty quiet on the streets, because Portland is taking the coronavirus seriously. During the night, the streets are pretty quiet, except for in a couple areas of town where the protests are happening.”

And there are other ways that concerned Portland-area UCC members are supporting calls for justice.

At Bridgeport UCC, “I’ve got a lot of people who can’t be out in the streets,” Wilkins said. Already immigrant-welcoming and long involved in justice ministries, the church voted in June to become an anti-racist congregation. “At every council meeting we begin with some kind of antiracist education,” she said. “It’s part of our everyday ministry to be working for racial justice.”

Waverly UCC “has been very supportive of my involvement,” Rosenau said. “There are lots of protests happening in Portland on a daily basis, so people are able to go to ones that fit their time of life, considering family and safety issues. We’ve been in lots of dialogue and taking action on policy work about reforming our law enforcement agencies. We’ve also had a lot of dialogue about nonviolence and violence.”

Besides joining in the call for justice, UCC people have also played a role just by being present.

“We have questions on a regular basis, people from protest community coming up to us and wondering why we’re there,” Rosenau said, referring to the interfaith “clergy witness” chaplains. At first, many were “justifiably wondering if we’re on their  side,” she said. By being there   nightly, the chaplains have built trust with the protesting community. “Now we often get thank-you’s — thank you for being here, thank you for supporting us,” she said.

“Every single time, people in the community are thanking us for being there,” Wilkins  said. “We’re able in some cases to provide some pastoral care. In that way it’s making a difference.”

Especially when First Congregational initially opened up, “there was just this overwhelming gratitude” from people who came in to use the bathrooms, said Cara Rothe, the church’s business manager, who has been there many nights. “They said things like ‘Wow, this is so cool the church is doing this. What is this church? This is great.’ And they kept seeing our faces. Night after night, we made an effort to say hello to every single person who came in.”

“There is this surprised gratitude that the church is willing to open to them without any religious messaging – no pushing or giving out literature about the church,” said the Rev. Janet Parker, First Congregational’s interim senior minister. “We are just truly there to be witnesses.”