The Rev. Kekapa Lee, an honored leader among Native Hawaiians in the United Church of Christ, retired local church pastor, award-winning musician and frequent participant in the denomination’s national work, died Nov. 19 at his home in Honolulu. He was 74. 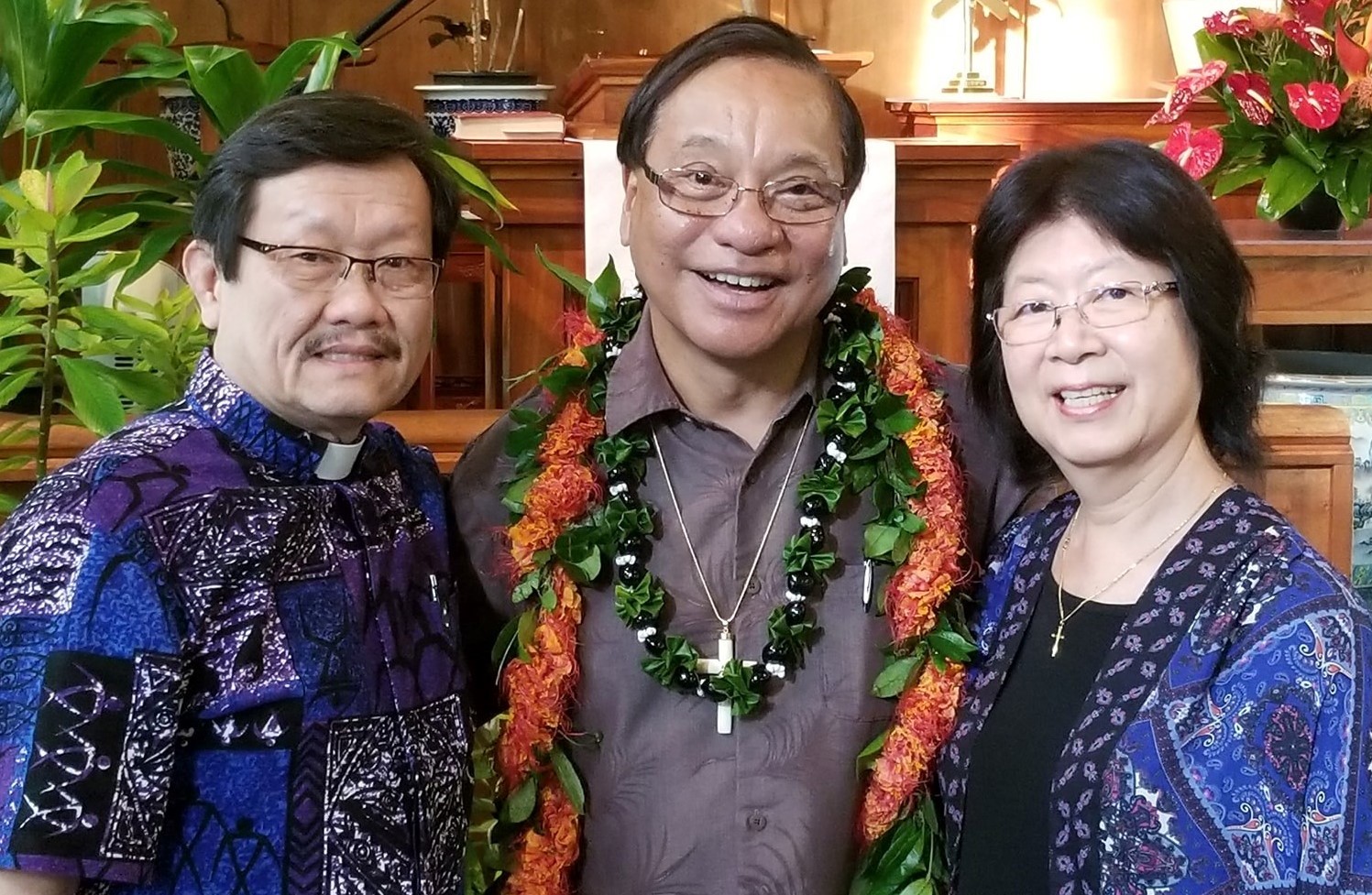 News of Lee’s death circulated on social media Nov. 20 and was confirmed by the UCC Hawaii Conference. A brief Nov. 30 obituary in the Honolulu Star-Advertiser said memorial services are pending.

Lee was remembered during online Sunday services Nov. 22 at Honolulu’s First Chinese Church, where he had retired as pastor in 2018. (He is seen, center, in the picture at right, from a gallery posted at the time of his January 2019 retirement celebration.)

Kekapa P.K. Lee grew up in Hilo, one of seven children of a Hawaiian mother and Hawaiian-Chinese father. Hawaiian culture was part of his very name.

His obituary listed his name as Kekapa Pauole Kealakala’i Lee. In a 2019 interview with the Star-Advertiser, he said his full given name was “Harvey Kekapa ahu ula o ka poohiwi o Kamehameha Lee.” The words mean “the red feather cape covering the shoulders of Kamehameha,” the first king of the unified Hawaiian islands in the 19th century.

A 1964 graduate of Kamehameha Schools, Lee served in the U.S. Army in Okinawa and Vietnam, then earned a bachelor’s degree from the University of Hawaii, Hilo. Having grown up in the church and sensing a call to ministry, he enrolled at Fuller Theological Seminary, Pasadena, Calif., where he earned an M.Div. degree. He worked as a youth pastor in California for several years before returning to Hawaii.

In the UCC, he was called in 1987 to lead Waiola Church, Lahaina, on the island of Maui. Ordained by the UCC’s Tri-Isle Association in 1988, he served as Waiola’s pastor, or kahu, for another decade.

At a 1996 Hawaii Conference annual meeting, Lee helped delegates understand the depth of pain which colonialism had inflicted on Native Hawaiians. The national setting of the UCC had publicly apologized in 1993 for the role of the UCC’s Congregationalist forebears in the U.S. overthrow of the Native Hawaiian monarchy 100 years earlier.

Now Conference delegates were in a sharp debate over a proposed resolution to join in that process of apology and redress.

As described in this February 2002 article in Yes magazine, Lee, during that debate, invited Native Hawaiian attendees to stand in witness to how deeply it still hurt, a century later, to have had their land and independence stolen and their culture suppressed.

That silent action, together with Lee’s words – “I have a very heavy, heavy, heavy heart because I don’t understand why an apology is such a big thing … Some of us are hurting and in pain because of this, and we’re asking your support” – reportedly had a pivotal impact. Ultimately, the Conference voted to apologize as well – and to join the wider church in making redress to UCC and other Native Hawaiian organizations, in the form of money, land and in-kind support. 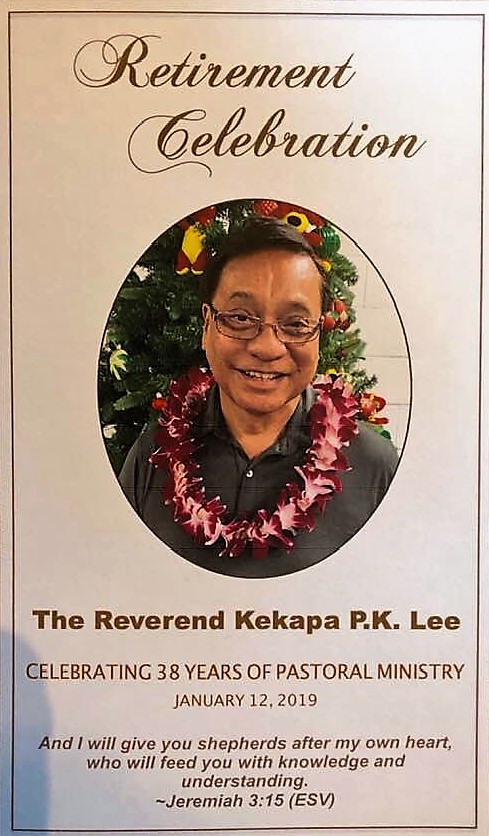 Service to the wider UCC

From 1999 to 2005, Lee served on the staff of the Hawaii Conference as associate for youth ministries, associate conference minister for educational activities, and leader, or Pāpā Makua, of the Association of Hawaiian Evangelical Churches, a non geographical grouping of predominantly Native Hawaiian congregations.

During that period, Lee also served a six-year term on the Executive Council – a predecessor of today’s UCC Board – and was, for two years, its vice chairperson. He was a member of the program and planning committee for the 1999 General Synod and introduced the Rev. John Thomas at the 2001 General Synod as the first nominee for the newly configured office of UCC general minister and president.

“Kekapa Lee brought the aloha spirit to his leadership on the Executive Council,” Thomas said. “Highly respected and admired by his colleagues, he helped interpret the complex but always rich diversity of Hawaiian culture and traditions while caring for the life of the whole church. His kind and gracious manner, along with his musical gifts, endeared him to all of us.”

Lee shared those musical gifts from the stage at more than one General Synod. An accomplished singer who also played ukelele, he won a Nā Hōkū Hanohano (Star of Distinction) award for Best Religious Album from the Hawaii Academy of Recording Arts for for his 1998 CD, “Aloha Kekahi I Kekahi.” Sung entirely in Hawaiian, it includes a setting of Queen Liliuokalani’s 1893 prayer, which appears in the UCC’s New Century Hymnal as “O Kou Aloha No” and on Lee’s album as “Ke Aloha O Ke Akua”.

Leaders of national UCC projects often sought him out for his wisdom in music, worship and ministry. He was one of many consultants and advisers who contributed to a 2005 report, “Worshiping into God’s Future,” by Local Church Ministries. He also served on a team that followed up on a 2005 General Synod pronouncement on issues in ministry and was a signer of its working draft report in 2009.

Mainly, though, messages posted at Lee’s Facebook page have remembered him as a warm, influential local church pastor – including at First Chinese Church, where he served from December 2007 to December 2018. The congregation posted a video tribute at its website and Facebook page Nov. 25.

In community work, he was involved with organizations such as Interfaith Alliance Hawaii and the Advisory Board for Child and Family Services in Maui, and was once a chaplain with the Maui County Police Department, said Lori Yamashiro of the Hawaii Conference staff.

Condolences may be sent to First Chinese Church, 1054 S. King St., Honolulu, HI 96814, which will forward them to family members, Yamashiro said.

“Kekapa was a true treasure to the Hawaii Conference and all the United Church of Christ,” said the Rev. David Popham, Hawaii’s current Conference minister. “Wherever he was, lives were touched by love and wisdom.”