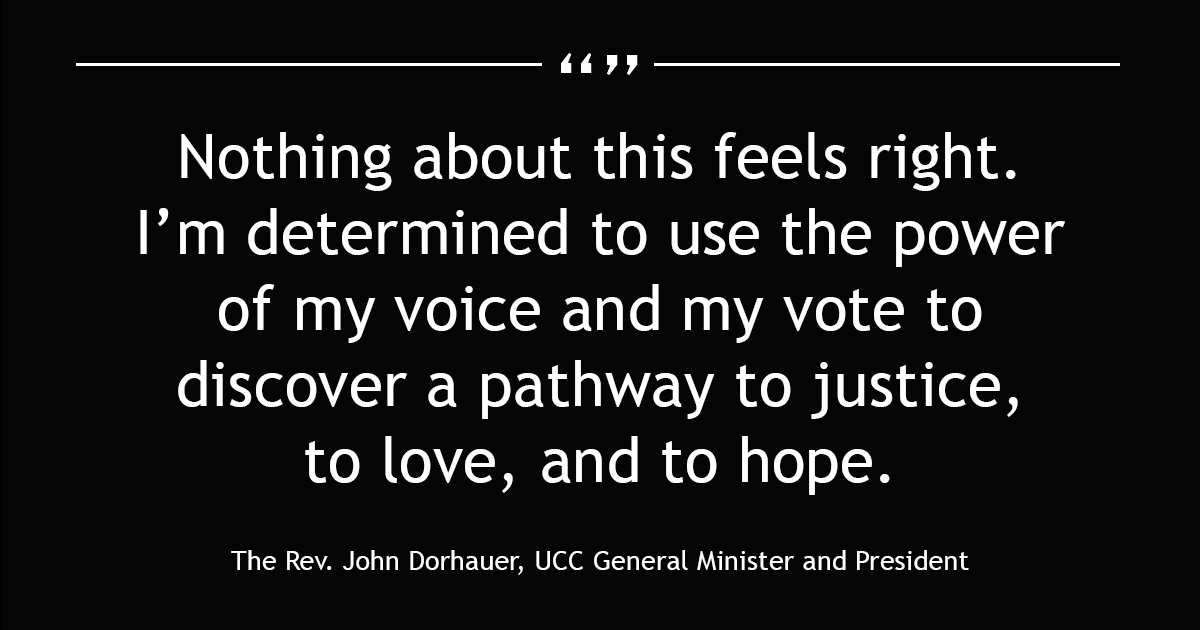 As the United States Senate votes by the slimmest of margins in American history to confirm Brett Kavanaugh as the next Supreme Court Justice in a 50 to 48 vote, national leadership and local clergy of the United Church of Christ express deep concern in the decision and vow to use their voices and voting power for the betterment of what they see as a deeply divided nation.

“The fight to the end for this candidate leaves the country divided, signals that politicized partisan politics will now proceed with no interest in finding common ground, and tells women that the current leadership of this country cares little about their abuse or their rights,” said the Rev. John Dorhauer, general minister and president of the United Church of Christ. “I am a person of faith and I will continue to fight for the reproductive rights of all women. I now have grave concerns about a court that will dismantle them.”

“Today, partisan politics won and the people are the casualty of this injustice,” said the Rev. Traci Blackmon, executive minister, UCC Justice & Local Church Ministries. “In its 229 years of existence only 119 people have been privileged to sit on The Supreme Court of the United States. Those challenged with such a tremendous task must be trusted by the masses. In the absence of such trust, elevation to such levels of authority will not lead to a strengthened union but rather to an erosion of the foundational principles that make such institutions effective. This level of unifying trust in the newest Supreme Court Justice Brett Kavanaugh has been irreparably damaged by the revelations of his Senate Committee Hearings. Revelations that provided more questions than answers. Revelations that divided the nation rather than unite it. Revelations of questionable character, poor temperament, partisan bias, and lack of full disclosure that taint his nomination no matter how one feels about the credible testimony of Dr. Christine Blasey Ford and others against him.”

“Whether or not one believed Judge Brett Kavanaugh’s testimony before the Senate Judiciary Committee, it was partisan, enraged and disrespectful,” said the Rev. James Moos, UCC executive minister of Global Engagement. “Clearly, he would not have tolerated such behavior in his own courtroom and it should not have been tolerated by a nominee for a lifetime appointment to this nation’s highest court.”

“There is a better way to do this and to get a nominee consistent with conservative, Republican values that does not send as clear and strong a message about how vulnerable women and their rights are,” Dorhauer said. “I am a Minister who has spent years pastoring women who have trusted me with their stories of assault and abuse. It hurts deeply to watch elected officials who found the testimony of a sexual assault victim credible and yet who voted to affirm her alleged perpetrator long before a full investigation into this could be completed.

“Nothing about this feels right,” Dorhauer continued. “I am appalled. I am angry. I am determined to use the power of my voice and my vote to discover a pathway to justice, to love, and to hope. This is not what that pathway looks like.”

“The collective conscious of our nation is not at peace,” Blackmon continued. ”The ultimate question addressed in Senate Committee hearings for Supreme Court Justices remains: Can this nominee be trusted to uphold the motto of the Supreme Court: ‘Equal Justice for all?’ Judge Brett Kavanaugh failed to unite this country in an affirmation deserving of lifetime appointment to the highest court in the land.”

“Judge Kavanaugh’s confirmation means that our already polarized nation will become more divided, and that courageous survivors of sexual abuse who have shared their stories are, once again, experiencing disempowerment,” Moos said. “Politically and socially, America is at a crossroads; our ideal of ‘liberty and justice for all’ is under assault by the very ones to whom it has been entrusted.”

The Rev. Kaji Douša, senior minister of Park Avenue Christian Church in New York City, agrees. She is one of thousands of people from around the country who converged in Washington, D.C. to protest Kavanaugh’s potential confirmation, and urged Senators to vote against it.

“As I stood on the steps of the Supreme Court Thursday with thousands of women from around the country, I shared with them that this nation is facing a crisis of belief,” Douša said. “Confirming Judge Kavanaugh either means that the majority in the Senate doesn’t believe women or it doesn’t care. But even if the senators don’t believe women, God does. God knows and God knows what they have done. There will be a reckoning. This is not over.”