After two mass murders in just over 13 hours that left 29 people dead and scores injured in Texas and Ohio, the President of the United States echoed the call that religious leaders and gun violence prevention advocates have been sounding for years: It’s time for swift bipartisan action to address the national epidemic of gun violence.

United Church of Christ leaders think the U.S. needs to go a step further. They issued a call to action, urging churches and congregants to make gun violence prevention a prominent campaign issue – in addition to offering prayers for victims, their families and the communities of El Paso, Tex., and Dayton, Ohio, where the Aug. 3 and 4 shootings occurred.

“In one voice our nation must condemn racism, bigotry and white supremacy,” President Donald Trump said from the White House Monday, Aug. 5. “These sinister ideologies must be defeated. Hate has no place in America. Hatred warps the mind, ravages the heart and devours the soul.”

In his Monday remarks, Trump stopped short of advocating for gun control legislation, calling instead for the need to disrupt hate crimes and domestic terrorism. He blamed the violence on the internet, video games and mental illness. “First we must do a better job identifying and disrupting early warning signs. Stop the glorification of violence in our society. We must reform mental health laws to better identify mentally disturbed individuals who may commit acts of violence. Get treatment, and when necessary, involuntary confinement,” Trump continued. “Mental illness and hatred pull the trigger, not the gun.”

Immediately after the weekend massacres, the General Minister and President of the United Church of Christ spoke out against white supremacist rhetoric and said it’s long past time that lawmakers focus on domestic terrorism and sensible  gun control legislation.

“These shootings are utterly horrifying. America must stop thinking prayers for the victims alone will resolve this. Two things must happen. Responsible gun laws must pass through Congress. And the President must be censured when his rhetoric crosses the line of decency and incites violence,” said the Rev. John C. Dorhauer.

News reports identified the shooter in El Paso as a white male acting on racially motivated extremism. He drove 10 hours from Allen to El Paso, opened fire at a Walmart and killed 20 people on Saturday. Little is known about the motivation of another white male who killed nine people in a Dayton entertainment district early Sunday.

Monday morning, Dorhauer said in addition to prayer for the victims, their families and our country, advocates need to keep going. Despite the “continued trauma of these tragedies on our nation’s soul and psyche” people of faith need to keep after “legislators who still do not take any action, to even talk about any sensible gun control laws, they are so beholden to the NRA and the powerful gun lobby. We have to get out and vote and any lawmaker who refuses to even talk about responsible gun control, they can no longer serve in our name and on our behalf. We have to walk out into the streets and march until the arc of history continues to bend toward justice.” 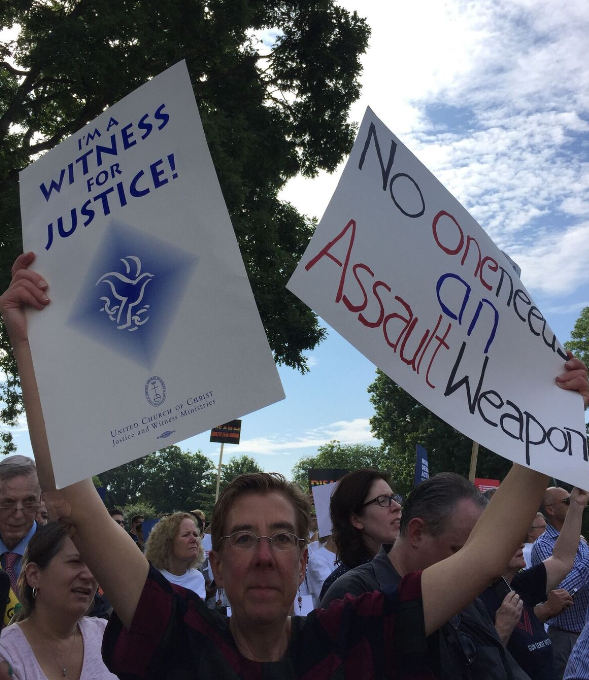 “In February of this year the House passed the Bipartisan Background Checks Act of 2019 which would require checks on gun transfers between unlicensed dealers. It has languished in the Senate for months without a vote,” said Sandy Sorensen, director of the UCC Washington, D.C. Office. “If there were the political will, Senate Majority Leader [Mitch] McConnell could call the vote today. We await the President’s call to McConnell to hold the vote today. Prayers and platitudes are not enough.”

The National Council of Churches, noting in a statement that “elected leaders are guilty of negligence and cowardice” and are “captives of the gun lobby,” is asking the 100,000 local churches that comprise its member communions to contact elected officials and demand actions that will renew the assault weapons ban.

“There is no reason for anyone to own assault weapons which were created for use in war. There is widespread public support for requiring licenses to own guns, for a ban on assault weapons, and for background checks. The only reason elected officials refuse to take action in the face of desires of the voters is because they fear the power of the gun lobby,” said the Rev. Jim Winkler, NCC president and general secretary. “The combination of readily available weapons of mass destruction and a toxic white racist nationalist ideology is a recipe for disaster. If we cannot confront these two evils, far greater violence and social disruption awaits our nation.”

Also awaiting Senate action is a host of additional gun violence prevention measures, including reversing prohibitions on funding for the Centers for Disease Control and the National Institutes of Health for studying gun violence as a health and safety epidemic, and provisions in the Violence Against Women Act reauthorization – passed by the House and stalled in the Senate – that would provide critical protections for victims of stalking, dating violence and domestic violence. Lawmakers could also ban large capacity ammunition magazines and extreme risk prevention measures.

What can be done?
• UCC leaders are urging members to call on the Senate to act immediately on pending gun violence legislation.
• They are also urging voters to attend town halls and candidate appearances and ask the candidates what they plan to do to end gun violence. For instance, a strong bipartisan majority of the House of Representatives recently passed background checks for all gun sales. More than 90 percent of Americans consistently support universal background checks. Ask the candidates about their position on passing those background checks, and what action they are taking now to see that the bill is signed into law.

“We are not helpless in the face of this unrelenting violence,” Sorensen said. “We can take meaningful bipartisan steps to reduce gun violence. From a faith perspective, it is nothing short of idolatry to put protecting guns ahead of protecting lives.”

“I pledge I will contact religious leaders all over this country this week to see how we can bring our collective capacity together to make a difference,” Dorhauer said. “May Jesus Christ, who rose from the dead so we could have our life, sustain us and give us the strength and the courage and the patience to see this through to the end.”

Access ‘Into the Mystic,’ Rev. Dorhauer’s weekly podcast, for more from him on this issue.