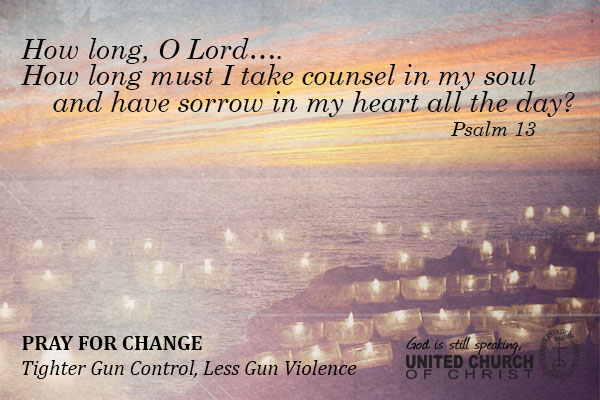 Fourteen people were slain Wednesday, Dec.2, in the deadliest bout of gun violence in the United States since the Sandy Hook Elementary School shooting in Connecticut in 2012. This latest tragedy at a social services center in San Bernardino, Calif., which once again reignites the gun control debate, leaves 14 dead, at least 21 injured, and leaders of the United Church of Christ calling on the nation's elected officials to act.

"Advent is a time of reminding ourselves that we live in a 'not yet' world, a season in which dreams of peace and hope and joy call us to greater things while current realities threaten to undo all that those dreams inspire," said the Rev. John Dorhauer, UCC general minister and president. "We lift up in prayer all the victims of the gun violence that erupted yesterday in San Bernardino."

"We also call for meaningful action from our government," Dorhauer continued. "Please pass a gun bill that gives citizens a chance to go to school, work, church, and shopping without the ever-present threat of death tolls rising."

"These are difficult days. We feel at a loss in so many ways to know how to respond or what to say or more importantly what to do. I don't think there are any easy answers but I do have a sense that God is weeping over what is happening in our world," said the Rev. Kent Siladi, conference minister of the UCC Connecticut Conference. He also added that witness is critical in this time.

"In this season of Advent we wait. We wait, but our waiting is not a time of inaction," Siladi said. "It is a time to allow our hearts to be broken open once again to the Incarnation of God. Into the midst of pain and suffering, of warfare and violence, of doubt and derision, God came as a child. Into our pain and suffering, warfare and violence — God comes again. This week we hear about John the Baptist, the 'wild thing' — proclaiming a baptism of repentance for the forgiveness of sins. That's a very fine way for all of us to prepare this season."

The heavily-armed couple opened fire on a holiday party that one of the attackers attended at the Inland Regional Center before he left in anger. The husband and wife fled the scene after the murders and were fatally shot during a police chase hours later. Police have said that the attackers, who wore masks and tactical gear, carried two assault rifles, two handguns and more than 1,600 rounds of ammunition.

The Inland Regional Center is a private community center for people with developmental disabilities, with a staff of 670 that serves more than 31,000 people. The Rev. Kelli Parrish Lucas, chair of UCC Disabilities Ministries, offered a prayer in response: "We ask you [Holy God] to be with those who experience increased anxiety or fear because of the shooting at the Inland Regional Center. We pray for persons with disabilities who now may fear to seek out the support services they need," she wrote.

The violence occurred just days before thousands of people of faith across the country were set to observe National Gun Violence Prevention Sabbath Weekend, Dec.10-14, to remember those who have lost their lives to gunfire, to pray for those who have lost loved ones, and to discuss and advocate for strategies aimed at reducing gun violence.  The event is a collaborative effort of more than 50 denominations and faith-based organizations participating in local events such as prayer, song, vigils and education. 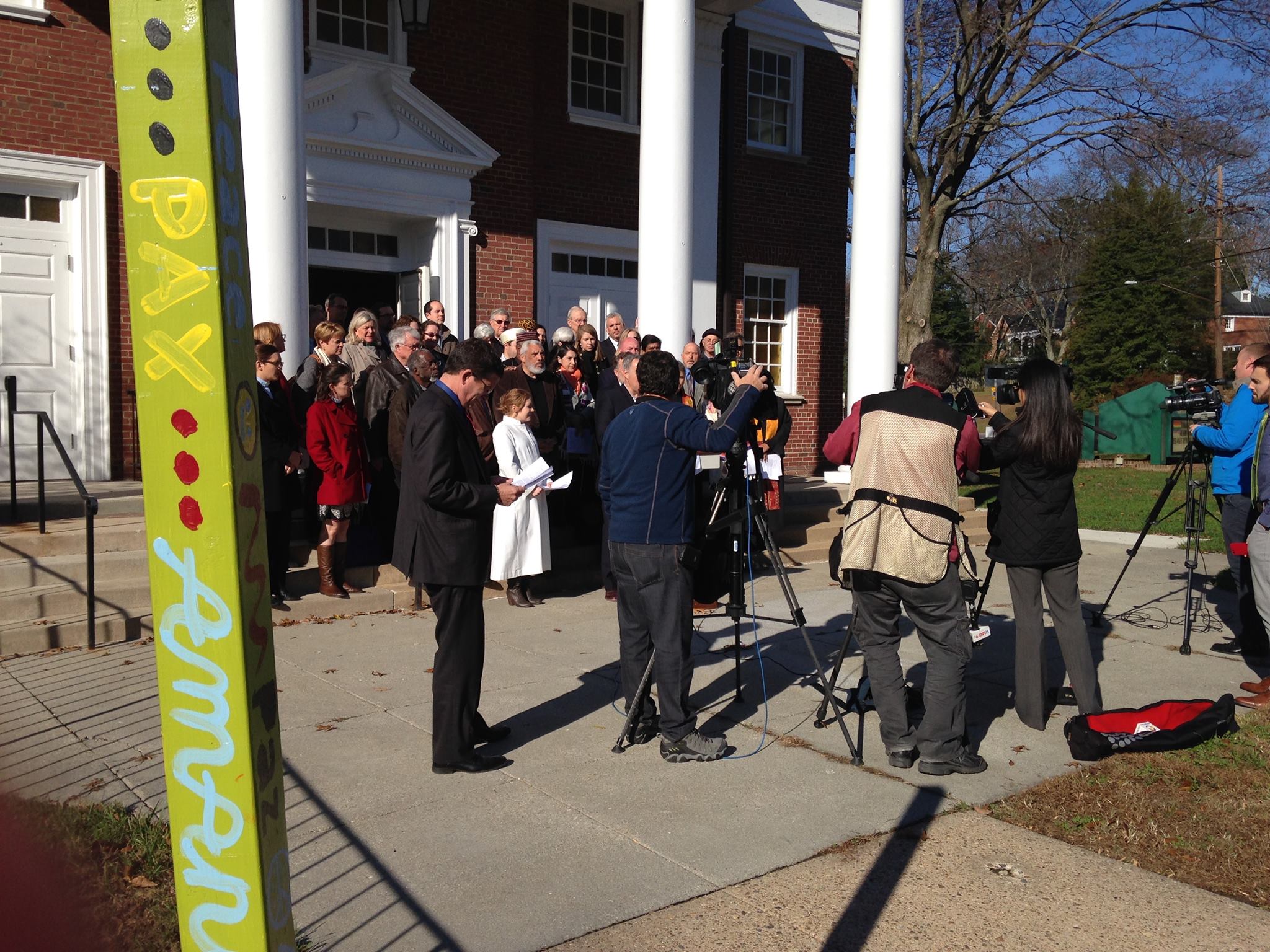 Thursday afternoon in the Washington, D.C., area, more than 70 faith leaders from Christian, Jewish and Muslim traditions were signatories to a letter released at Westmoreland Congregational UCC in Bethesda, Md. The letter, organized by the Potomac Association of the UCC, called on Congress to pass tougher gun legislation.

"As clergy members and religious leaders we commit to prayer, preaching and teaching respect and non-violence, and caring for individuals who know injury and grief," the letter said. "We call on all people of goodwill to join us in demanding that our elected officials at all levels — but especially members of the Unites States Congress — enact universal background checks, safe storage requirements, limits on large gun purchases, and limits on straw purchasers."

"Too many lives have been lost. Too many families grieve. We ache for our nation," the letter concludes. "Now is the time to work for change."