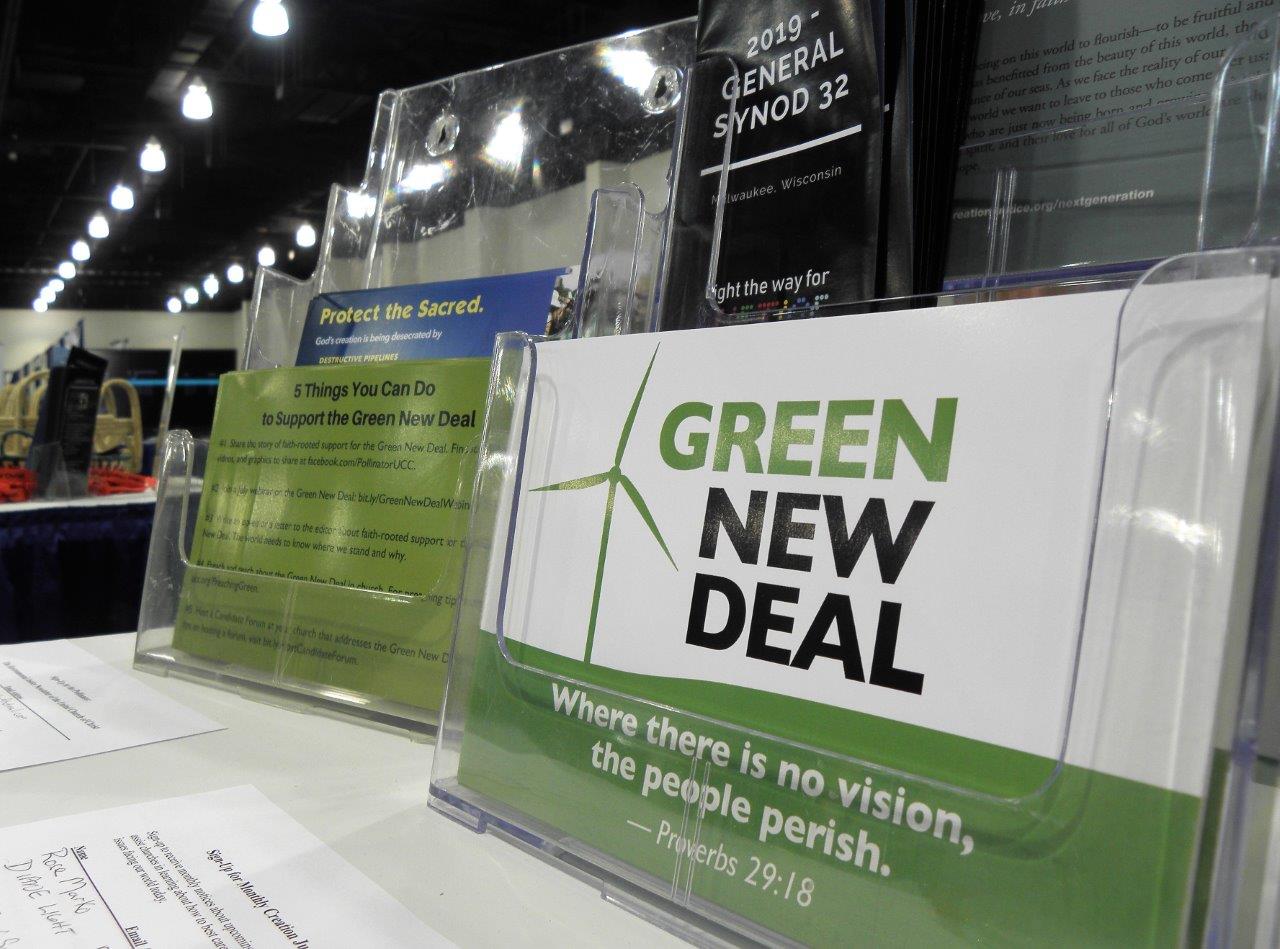 The national deliberative body of the United Church of Christ on June 24 became the first U.S. Christian body to endorse the Green New Deal, a congressional proposal that lays out a plan for tackling climate change.

The Green New Deal (H.R. 109, S.R. 59) is a good match for the church’s own conviction that “climate justice” concerns are linked to racial and economic ones, the General Synod said. Its “resolution of witness” passed by a vote of 662 to 30 with nine abstentions. The Synod is meeting at Milwaukee’s Wisconsin Center through June 25.

Delegates and those involved in preparing the resolution also spoke in terms of faith. “The vision and urgency of the Green New Deal are what is needed to preserve and restore God’s great gift of creation,” said the Rev. Jim Antal of Norwich, Vt., who wrote the Synod resolution, which was submitted by several of the church’s conferences, or regional bodies. Antal also serves as the special advisor on climate justice to the UCC General Minister and President. “May other Christians and people of every faith join us in endorsing the Green New Deal.”

The language found in the congressional document will be familiar “to anyone who has read UCC justice resolutions over the years,” said UCC member Dawn Sowash of Philadelphia, presenting the resolution for a committee of Synod delegates who studied and recommended it over the weekend. “We want to focus on the science and not lose focus on the social concerns and implications. Climate change threatens the safety, health and dignity of ordinary people,” she said, and it disproportionately affects the vulnerable. “The Green New Deal calls for action now, not later.”

“It’s about connecting the dots of cause and effect,” said the Rev. Michael Malcom, senior pastor of Atlanta’s Rush Memorial Congregational UCC and executive director of Alabama Interfaith Power and Light. “Black and brown people, people in poor communities, are disproportionately affected by what we’re doing to the climate.”

Biology professor Andi Lloyd, dean of faculty at Middlebury (Vt.) College, spoke as someone who has studied climate change for 25 years and is now preparing for ordained ministry in the UCC. “Climate change is real and we are the cause,” Lloyd said. “There is as close to a consensus on this as there ever is on anything in science.” She agreed with the Synod resolution’s assessment that something can be done. “This is not an asteroid hurtling toward earth. It is us. But the window is closing. We must act now, and only bold action will suffice.”

“Science is crucial, but science alone cannot fix this,” Lloyd said. “It is also a religious issue. It requires our voices as Christians and our hands as Christians. The world needs us. Now is the time.”

The UCC statement “recognizes the scale and immediacy of the climate crisis, the urgent need to achieve net-zero greenhouse gas emissions as soon as possible, and the moral obligation to embrace the unprecedented socio-economic changes that we must effect and engage as opportunities to create fair paying jobs, secure clean air and water, redress manifestations of environmental racism and pursue a just transition to clean and renewable energy.”

Quoting the biblical book of Esther, the resolution calls the church “to accept the moral responsibility for living ‘at such a time as this’” by, among other things:

“This is an opportunity for churches to tangibly advance the kind of transformative societal action for which Pope Francis called in his encyclical on the intertwined crises of climate and inequality,” said Brooks Berndt, the UCC’s Cleveland-based national Minister for Environmental Justice. “It is in essence an opportunity to bring the moral power of our faith to bear on the most critical issues our planet faces today.

“For me on a personal level, I view this resolution as being about more than the Green New Deal. It is about a promise I am making my daughters: with others of firm conviction, I am going to do everything I can for our country to enter into a state of all-out mobilization to address the twin crises of climate and inequality. For me, this resolution is what love looks like, feels like, and acts like. For many of us, this resolution is very much about a love for children.”