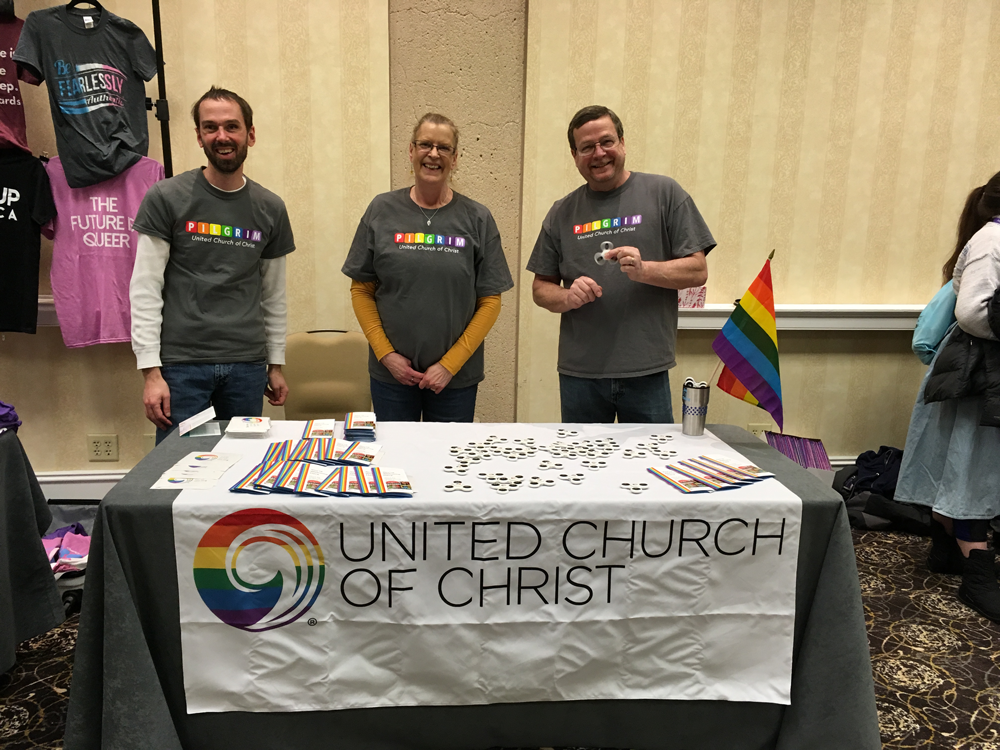 Almost 1,000 college students from around the Midwest traveled through snow and ice for up to 16 hours to converge in Wichita, Kansas the weekend of February 16-17. The destination for their pilgrimage — the 27th annual Midwest Bisexual Lesbian Gay Transgender Asexual College Conference (MBLGTACC), which the organization bills as “America’s largest and oldest continuously-held conference for queer and trans+ college students.” This year, for the first time ever, the United Church of Christ served as the student-run event’s premier financial sponsor.

MBLGTACC usually draws more than 2,000 participants, but treacherous weather impacted this year’s numbers. Despite the freezing rain, spirits remained high at this event, an annual tradition for many participants and presenters. Students from schools across Michigan, for example, represented campus groups who have been attending and supporting MBGLTACC for more than 10 years, and they see campus representation as a source of pride.

Several of the students cited education as a primary reason for attending. “I’m a welding major, I don’t know gender theory!” exclaimed first-year student Axel Laurain of Ferris State University in Big Rapids, Michigan. Laurain, who identifies transgender, explained that MBGLTACC is the only place he can come to learn more about all of the issues that affect him and his peers and allies.

Trinity Dearborn of Iowa State University agreed. “For example,” they said, “This year I learned about ableism and the intersectionality [of ableism and LGBTQ+ experience].” Dearborn doesn’t identify as personally impacted by ableism, but they appreciated the opportunity to broaden their awareness and support for a related community.

In between workshops, plenary sessions, and entertainment, students could tour the Expo Center, where a booth for the United Church of Christ was prominently visible and staffed mostly by members of a local Wichita congregation, Pilgrim UCC.  Rainbow-comma-branded fidget spinners were among the coveted swag items offered along with stickers, brochures, and information about UCC congregations in Midwestern states. 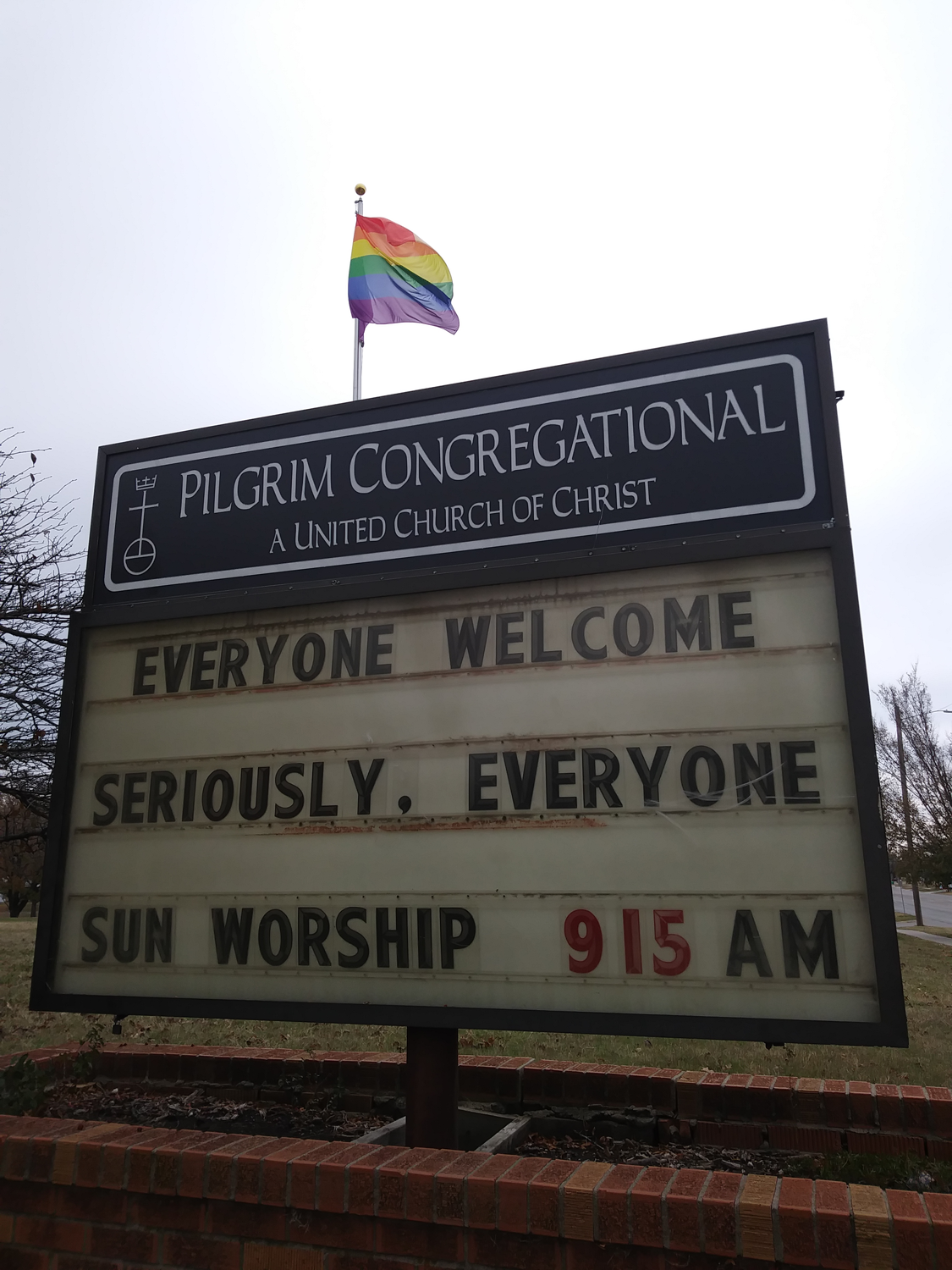 The inspiration for the UCC’s sponsorship of MBLGTACC 2019 originated in conversations between Kansas-Oklahoma Conference Minister Edith Guffey and Wichita Pastor Phil Hodson. When Guffey pitched the idea of showing up, Hodson agreed immediately.

“We can’t just talk about being Open and Affirming in our bulletins, for people who come inside,” said Hodson. “We have to put our ONA values in the public square, for everyone to see.” For Pilgrim UCC in Wichita, that now includes a 12-foot long Pride flag on the campus grounds.  “Some people were resistant to the idea, they were worried about what people would say or what would happen to the church property. But nothing bad has happened. Instead, what we’ve seen is new people showing up every Sunday. We’ve had people drive by our church and call or write letters just to tell us, ‘Thank you for being here.’”

Building on this positive experience, Pilgrim UCC was eager to participate with MBLGTACC 2019, but they didn’t have the funds to offer sponsorship. When Hodson turned to Guffey for support, she immediately agreed. She also reached out to the UCC and her fellow Conference Ministers in states that were likely to have students attending the gathering. “The West Central Region readily agreed to contribute to the sponsorship, as did John Dorhauer and the Michigan Conference. The Indiana-Kentucky and Ohio Conferences signed on as well,” Guffey said. “It wasn’t initially about just getting the money needed. It was about their buy in to get our name out there to these students.” The UCC General Minister and President responded with a $1,000 commitment, and with the Conferences, gathered more than $8,000 to secure a Premier Sponsorship. 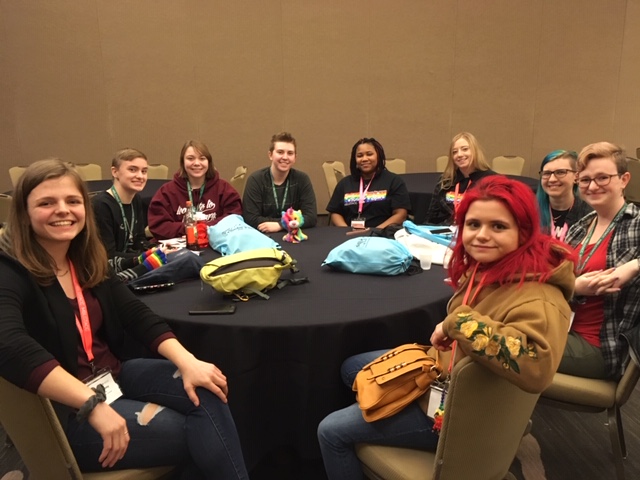 Student responses to the UCC presence at the event were cautious but mostly positive. “Almost all of the students who’ve visited our table have had one of two reactions,” Hodson said.  “They’ve come to simply say thank you; or they’ve come to ask, with honest curiosity, why a church would want to be here.” Most were surprised to learn that the UCC is the event’s top sponsor.

The Michigan student caucus agreed that, on all of their campuses, Christian groups are “aggressive” but not welcoming or affirming of queer and trans+ people.  Many of them described individual local pastors who have built a relationship with their student groups, though not always with the full backing of a local congregation. Students from Northern Michigan University, located in Michigan’s Upper Peninsula, quickly dismissed the possibility of finding a truly queer and trans-friendly church anywhere nearby. Like so many of the midwestern college students at MBLGTACC, this is the one place and time of year where they can truly be surrounded by people who accept, love and celebrate them completely.

Hodson sees the event as a critical opportunity to extend hospitality. “We know that college-age youth identify as the loneliest generation,” he said, citing a recent study by CIGNA . “They’re so connected through social media, but they don’t feel like they have anyone they can really talk to. We believe in the Gospel, that every person alive is God-breathed, that every person is a beloved child of God, and we have to keep saying it because so many people have never heard it, especially in the Midwest.”

The Rev. Rachael Pryor is part-time pastor of Andover Lutheran Church, a small ELCA congregation in Windom, Kansas.  She holds standing in the Kansas-Oklahoma Conference, UCC, where she is also the 3 Great Loves Coordinator.