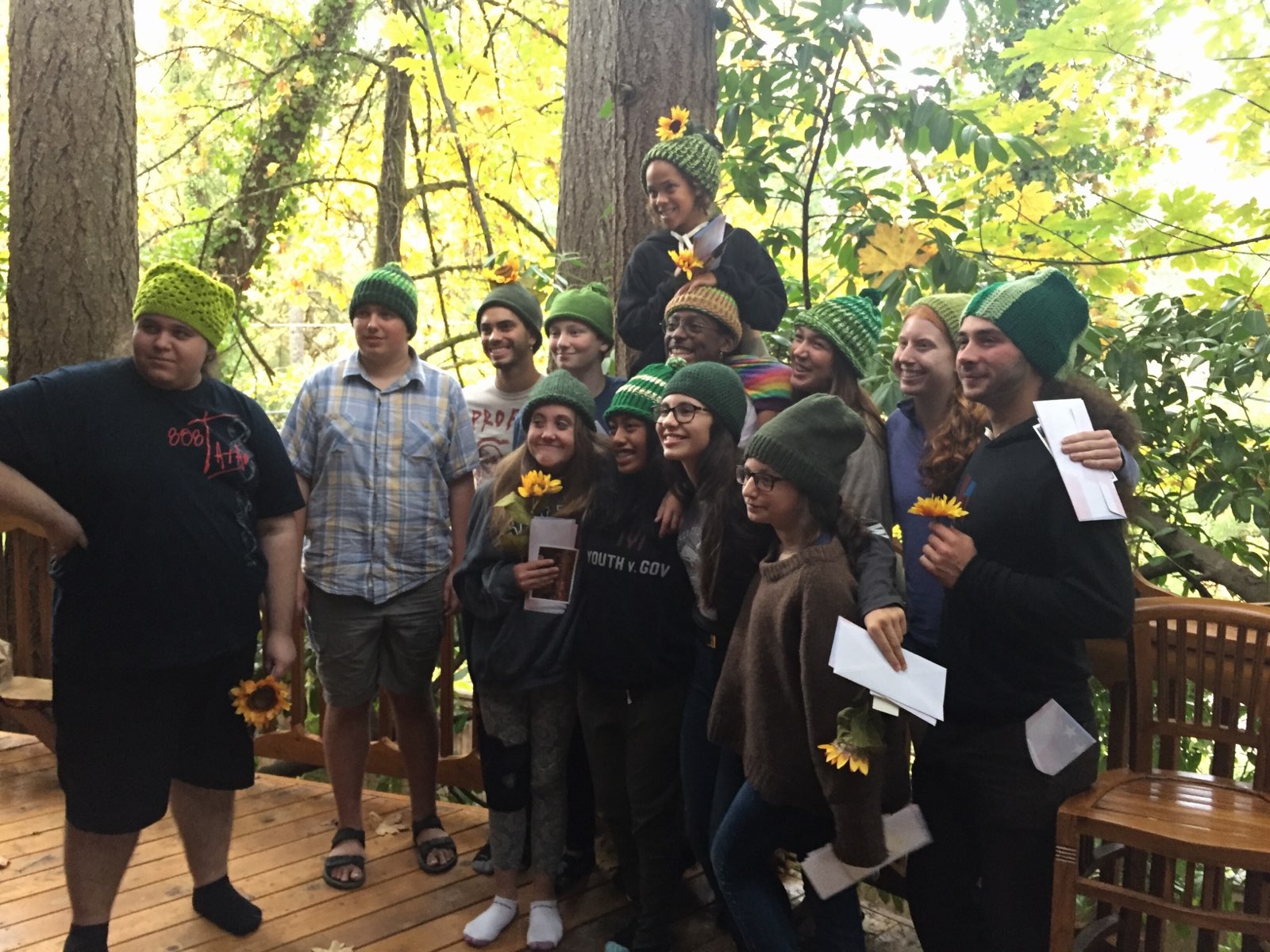 Twenty one young people suing the federal government to secure a legal right to a stable climate for future generations are still waiting for their day in court. The Supreme Court’s temporary stay, issued October 21, has yet to be lifted, keeping Juliana v. The United States from beginning as scheduled in Eugene, Ore., Monday, October 29. Instead, youth around the country, at scores of Federal Courthouses across the U.S., raised their voices in local rallies, demanding the young plaintiffs get their right to be heard.

Along with people of different faiths, three UCC ministers participated in the opening prayers of the rally at the Federal Courthouse in Eugene on Monday morning. The Rev. Melanie Oommen, mother of one of the plaintiffs and associate minister of First Congregational United Church of Christ of Eugene, was joined by the Rev. Curran Reichert, pastor of First Congregational Church of Sonoma (California) UCC, and the Rev. Brooks Berndt, minister of Environmental Justice for the UCC.

“I want to speak this morning as a person of faith and as a parent,” Berndt said. “What I have come to realize in our society is that unfortunately a lot parents have not yet connected the daily spirituality of their lives with the reality of climate change. I can tell you nothing mobilizes and moves a parent to act like getting a child out of harm’s way. Yet, it is as if our society is stampeding toward the cliff’s edge, and we are not realizing the danger our children and youth are in. The cliff’s edge is now in sight, and we are still struggling to make the connection. This is why I believe the voices of the plaintiffs are so critically important.”

The young people are interested in climate justice, but Juliana v. The United States is about civil rights. The plaintiffs contend that a safe environment is their Constitutional right — one that has been violated. They want a court-ordered mandate that phases out the use of fossil fuels nationwide.

Our Children’s Trust is the non-profit organization that has been working with the young people to get justice since 2015 as the case has worked its way the courts. The people of First Congregational Church of Sonoma UCC became interested in the case over a year ago through a relationship with Our Children’s Trust. 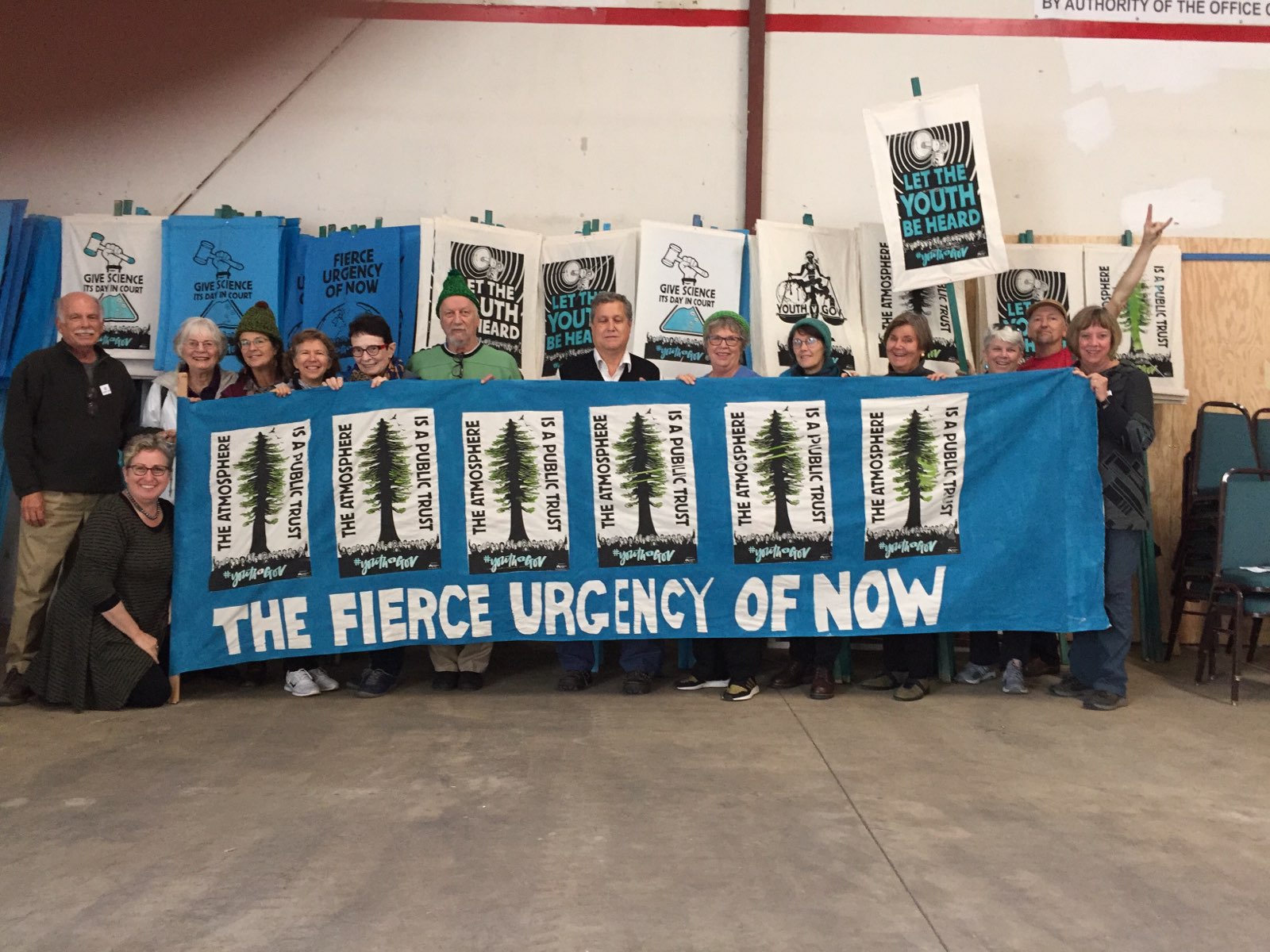 “One of the co-founders of Our Children’s Trust, Sharon Duggan, is a personal friend of mine,” said Virginia Bertelsen, a member of the First Congregational Church Earth Care Committee. “We decided we wanted to support them in this effort.” In the last year, the Sonoma church has held a town forum with a few of the plaintiffs, invited youth to talk about environment and creation care, and participated in the UCC’s 1,000 sermon program on the plaintiffs’ behalf.

So when the Juliana v. The United States got a court date, a trip up from Sonoma to Eugene to support the young people during the first day of the trial was planned. On Saturday, Rev. Curran and 14 members of First Congregational Church drove to Oregon, bearing gifts.

“A sister of one of the Earth Care Committee members is also one of the Sisters of Charity in Dubuque, Iowa,” Bertelsen said. “The Sisters have a group, called the ‘Knit Wits’ which made some hats for the 21 plaintiffs.” 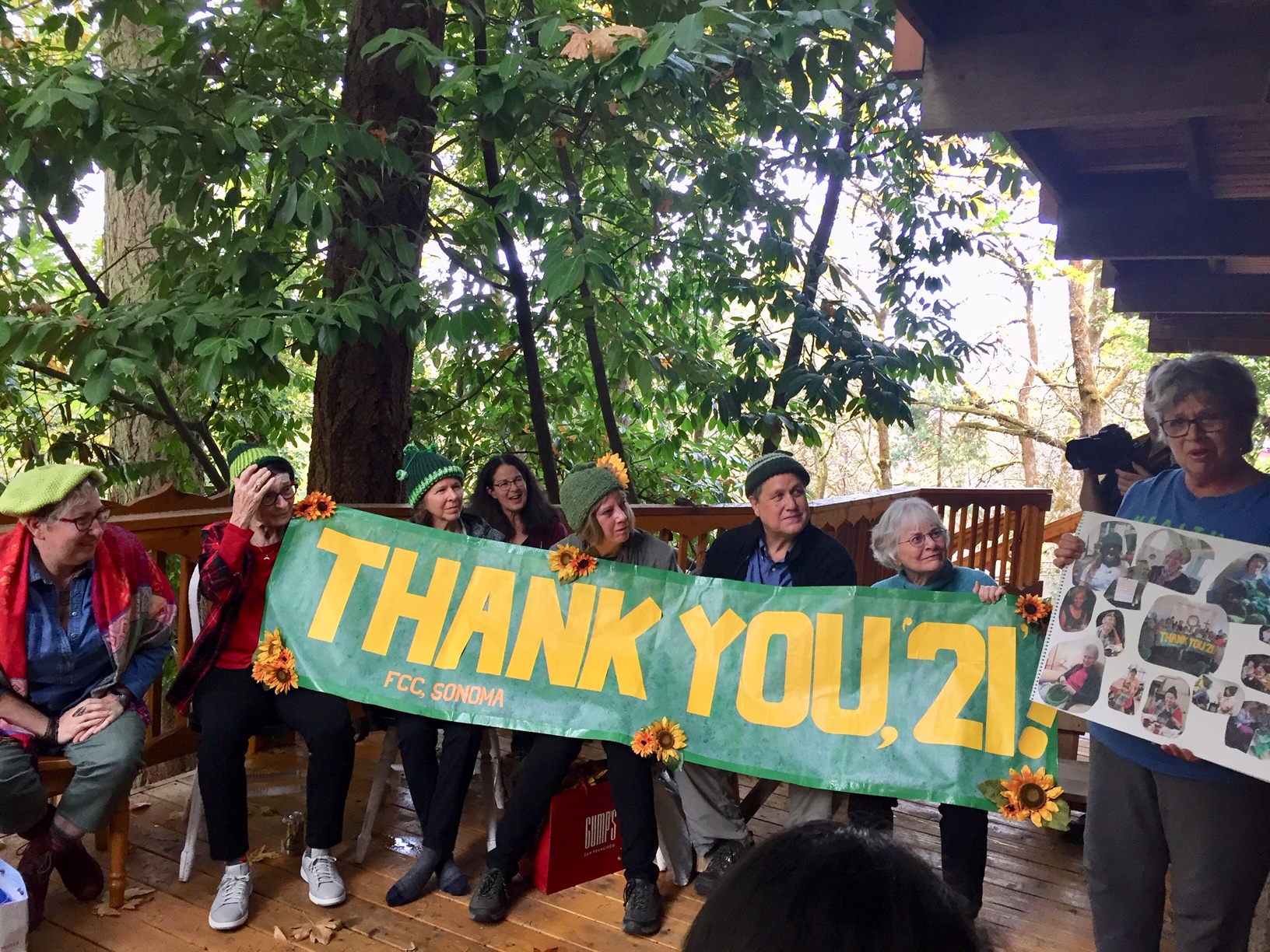 “A deeply moving moment happened when the members of the Sonoma UCC church met with the plaintiffs at the house at which they are staying,” Berndt said. “The Sonoma folks brought each of them a green knitted hat, personal letters of support from congregation members, and books of poetry. The Sonoma folks shared why they were so supportive. The Sonoma pastor asked the youth to reflect on how they were feeling in that moment and what they were thinking. The responses were powerful. The Our Children’s Trust staff were deeply appreciative that the Sonoma folks had created a space for that.”

“The reception here has been unbelievable,” Bertelsen said. “The time with the kids was the most magical, sacred time. The children have been so strong for the last three years waiting for this trial. I saw in their faces.. there was circle made Saturday between them and our members and there was this lovely energy and trust. When Curran asked, ‘how are you feeling?’ they took time and listened to themselves. Seemed like such a relief for them to be heard and held.”

Berndt said he still hopes the trial will begin this week. Juliana v. The United States has already survived several legal challenges and motions to dismiss, with lower federal courts allowing it to proceed.

The UCC sermon campaign, Justice for #EachGeneration, which urges clergy across the country, and young people of all faith traditions to preach a sermon for the plaintiffs, will continue for the duration of the case.

And though the members of Sonoma UCC will be heading back to California Tuesday, before the trial begins, the young plaintiffs remain in their hearts and in their prayers.

“It’s been a phenomenal journey,” Bertelsen said. “We were so honored to be here in support of the youth.”