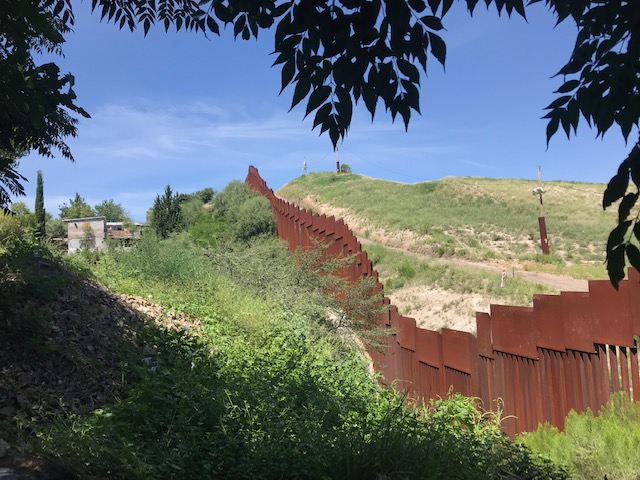 A number of UCC churches in the Arizona Borderlands, opening their facilities to shelter and support hundreds of migrant asylum seekers being released in waves from ICE (Immigrant and Customs Enforcement) custody this month, are living out a 2017 General Synod Resolution to be an Immigrant Welcoming Church. And despite the demands of feeding, housing and accompanying these unusually large groups on this short leg of their journey, clergy and congregants are finding themselves forever changed by the experience.

“For several years our church has discretely provided hospitality to migrants as they travel from DHS (United States Department of Homeland Security) custody to court appearances and ICE appointments in other states. We have offered housing, meals, assistance in communicating with worried family members, and transportation,” leaders of First Church UCC in Phoenix write. “We cannot remain silent as we listen to harrowing stories of their brave journeys that brought them to our spiritual community. The nearly week-long presence of our latest guests has transformed our campus into the embodiment of the Divine.”

While ministering to migrants isn’t new, the sheer number of people churches are serving in October is.

First Church opened its doors to more than 100 people last week, as did Shadow Rock UCC, also in Phoenix. Not all UCC churches involved in this work are named, to protect the privacy and security of their guests. A congregation in Tucson was initially one of several churches offering refuge to undocumented migrants released from detention by the bus load. 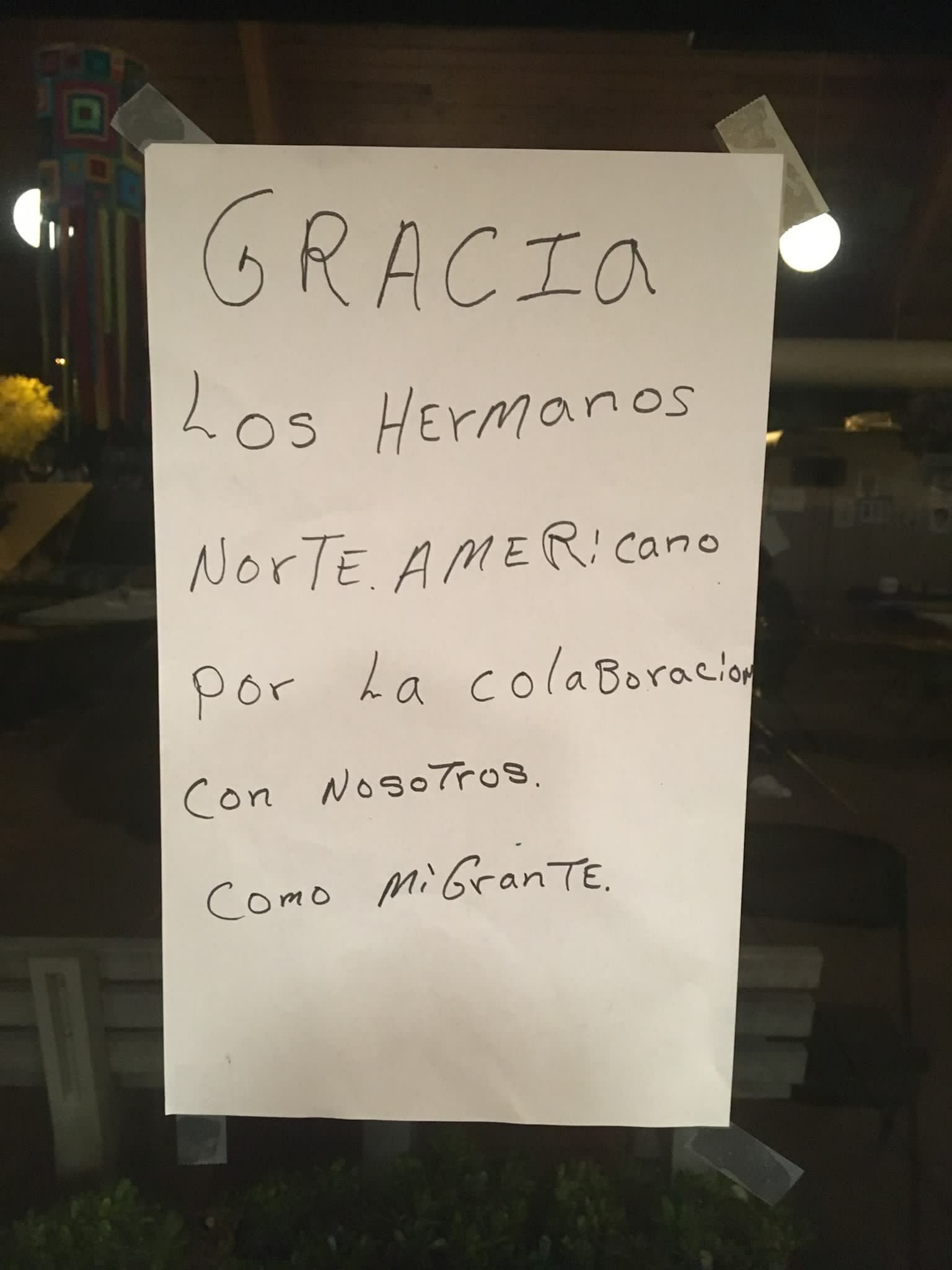 “One of the most memorable experiences I have had at the shelter was on Saturday when our TransParent group of transgender children and families was on campus for their regular monthly meeting. Their usual space was being used and they graciously agreed to be moved to less accommodating spaces,” the Tucson pastor writes. “The children were playing outside and our children joined in to play soccer and run around wildly in the rain screaming. The migrant families mostly watched but were very entertained. The sound of their laughter and the sight of such a diverse group of children playing so gladly and easily was one of the most beautiful moments in my twenty years of ministry.”

Today, that church shelter continues to operate with another wave of guests. But more than 150 recently released migrants in Tucson, now in the care of the local faith community, are being housed in hotels because of space considerations.

To minister to the multitude, all the Borderland Churches are working in community — with interfaith and beyond people of faith organizations in their local areas. They are being supported by local volunteers and donations of clothing food and funds, so they can offer meals, medical care, showers, sleeping space, help with translation and transportation to those who come seeking refuge.

“Our immediate response was providing food and housing, but it became apparent that their needs were much greater,” First Church leaders write. “Their medical and health conditions were inadequately managed in detention. Several had been sick for days and in need of prescription medications which were denied them in detention. Four of our guests were taken to the hospital in the first few days of their stay. This lack of attention to basic human needs is unconscionable.”

The Southwest Conference, in partnership with the Arizona Faith Network, is hoping to open a dialogue with Immigration and Customs Enforcement to call attention to and remedy those circumstances. “We hope to have a conversation with ICE to improve the conditions and care of migrants in detention,” said the Rev. Bill Lyons, Conference Minister. “Our churches are seeing people coming to them sick, dehydrated and undernourished.” 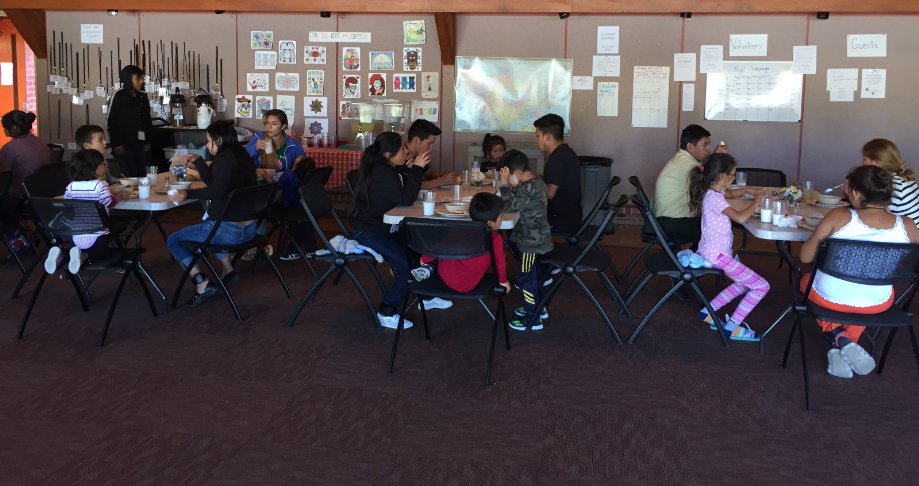 The Tucson church food crew is talking to guests to make sure they serve them meals their digestive tracks are ready for, and has also established a clinic with doctors and nurses on call. All volunteers have to have had a flu shot as well.

All the UCC groups working with migrants expressed joy that these groups are no longer in government custody, that families are staying together or have been reunified. However, both Lyons and the Rev. Ken Heintzelman, pastor of Shadow Rock UCC, believe the administration is trying to create an immigration crisis with these mass releases leading up to the November 6 election.

Rev. Randy Mayer, who’s pastored a UCC church along the border for 20 years, indicated that “many believe that the release of the masses from the ICE Detention Centers and dropped off at churches is a political stunt, purposefully done to create a storyline for the midterm election: that the US/Mexico border is out of control and overrun with violent and dangerous criminals.”

“It’s curious that it’s election time and suddenly the migrants are storming at the border. Thank God we can step into the breach,” said the Rev. Delle McCormick. “As a pastor, I have only once experienced ‘church’ like this, and that was as a UCC Common Global Missionary in Chiapas, Mexico. Our campus is truly a place of transformation for everyone, guests and volunteers.” One volunteer she noted came to Arizona from Mayflower UCC in Minneapolis to lend a hand.

“When I thank people for volunteering, I hear ‘I was made for this’ and ‘I have been waiting for something like this,'” she continued. “Not that this misery is good for us. But the opportunity to work together across difference, to be and receive through our guests the body and breath, hands and feet of Jesus in the world is indeed, Good News.”

First Church is calling on other faith communities along the Border and beyond to come together to support these Central American neighbors hoping to make new lives in the U.S. and “restore dignity to humanity.”

“This inhumanity will clearly continue until we use our united voices to speak, our hands to share, and our feet to march,” First Church leaders write. “Unite! Speak up! Rise up! With few exceptions, we are all the children of immigrants, or are immigrants ourselves. For most of us in this country, someone in our past bravely risked an uncertain journey so that each of us could be here.”

Heintzelman emphasized that it comes down to one simple commandment. “The bottom line is we do this because it is in keeping with the Gospel imperative to love God and neighbor.”

As McCormick said, “People always said in Chiapas, ‘Tenemos que gastar la vida a favor de la vida.’ We are called to spend our lives on life (for all of God’s people.) Amen and Amen.”