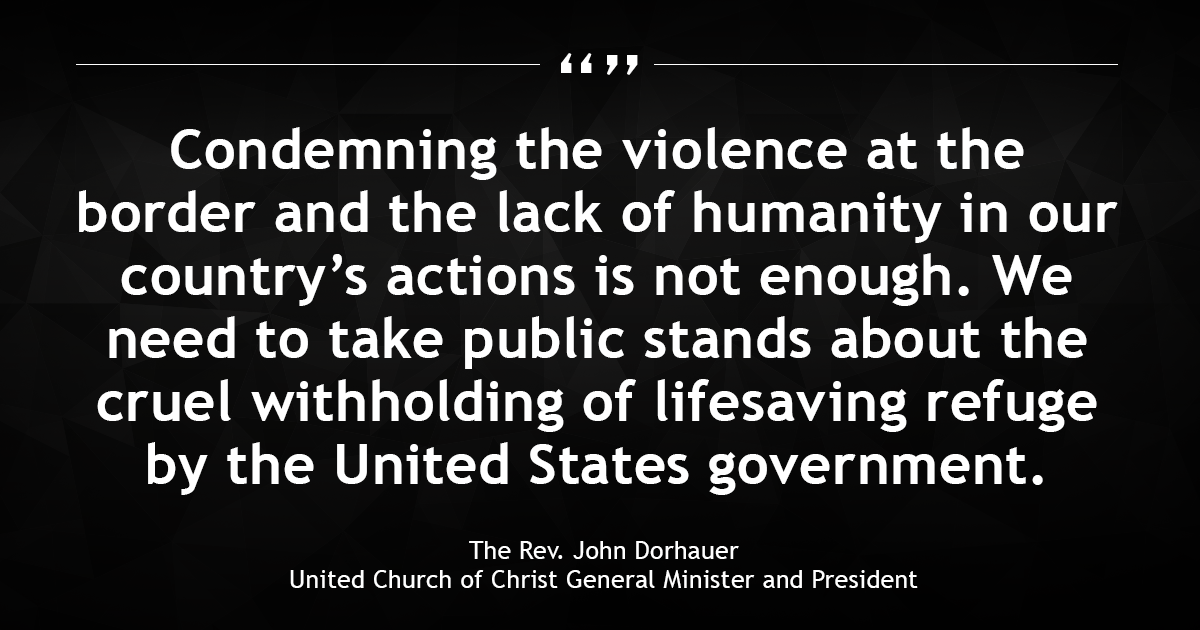 The United Church of Christ national leadership is urging member churches and congregants to mark the season of Advent by heeding the call to embrace the other, and to offer a public Christian welcome to migrants seeking safety and protection in the United States.

On Sunday, November 25, the world watched as the United States government lobbed teargas at a crowd of defenseless families at the border near Tijuana.

“Condemning the violence at the border and the lack of humanity in our country’s actions is not enough,” said the Rev. John C. Dorhauer, general minister and president of the United Church of Christ. “We need to take public stands about the cruel withholding of lifesaving refuge by the United States government.”

The National Office seeks to amplify the voice of the UCC Central Pacific Conference, which is calling for a human rights investigation by Congress into the November 25 actions of the U.S. Customs and Border Patrol agents at the San Ysidro port of entry.

“The actions taken on Sunday are in violation of the Universal Declaration of Human Rights adopted by the United Nations in 1948,” said the Rev. Molly Carlson, Conference Minister. “As the images of women and children being teargassed came across the airwaves, I was horrified that such actions were taking place with the blessing of the White House. We are urging our member churches to contact their Congressional Representatives to challenge this inhumane treatment.”

The Rev. Linda Jaramillo, Moderator of the Conference, said, “We, who have never had to escape from daily violence and threats to life, cannot understand the risks that parents will endure to save their children’s lives. As a mother and grandmother, my heart is torn apart by the cruelty that the U.S. government is imposing through hostile methods that mirror the very reality that our beloved children have just experienced in their homelands.”

“So many of us are outraged and heartbroken over the inhumane threats and actions of the Administration against those legally seeking asylum and safe harbor,” said Sandy Sorensen, director of the UCC Washington D.C. office. “Right now, Congress is considering proposed funding for a border wall and increased spending on border militarization. You can make a difference by raising your voice and sending this Justice and Peace Action Network action alert to your members of Congress. Please also forward it to friends and family.”

By accessing the action alert, users can tell Congress they do not want tax dollars spent on inhumane immigration enforcement measures and that Congress should reject funding for the border wall, increased border militarization, and any spending increases for immigrant detention and enforcement. 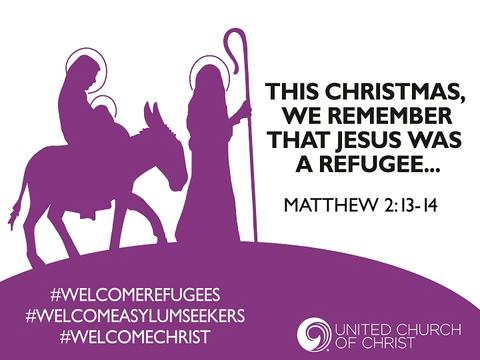 UCC churches are also invited to make visible a sign of support for migrants seeking better life, especially during Advent. To mark this season, one of expectation and hope, UCC Refugee Ministries has just released a yard sign that churches and congregants can display expressing solidarity with refugees and asylum-seekers in English and Spanish.

“It is a tangible reminder that ‘Jesus was a refugee…Matthew 2:14.’ This story is the story much of our nation will be focusing their attention on for the next 4 to 5 weeks – the birth of Jesus,” said Amanda Sheldon, program associate. “We should not miss this Kairos moment God is creating for us to force people to see the parallel with the birth and subsequent flight of Jesus and the Holy Family and the thousands of families at our border asking simply for the same.”

“I call upon leaders in every setting of the United Church of Christ to take action,” Dorhauer said. “Please contact your legislators and encourage them to hold the President’s office and staff accountable and require them to adhere to International law and U.S. law regarding the treatment and reception of asylum seekers. As we gather in worship this Advent season, may our prayers ascend on behalf of those who have been forced from their homeland in pursuit of a safe place to harbor their children.”

Jaramillo challenges all Christians to not ignore what’s happening at the border during this time. “I will not and cannot accept this as our new normal. We must be better than this. I pray that our souls will break wide open to expose our deepest love and compassion beyond borders, especially in this Holy Season of Advent”.

Use this link to contact your Congressional representatives. Order an Advent yard sign from UCC Resources here.

An Immigrant Welcoming Church, the United Church of Christ raised more than $25,600 on Giving Tuesday, to help support people who enter the United States with little to no resources seeking protection, asylum or sanctuary.