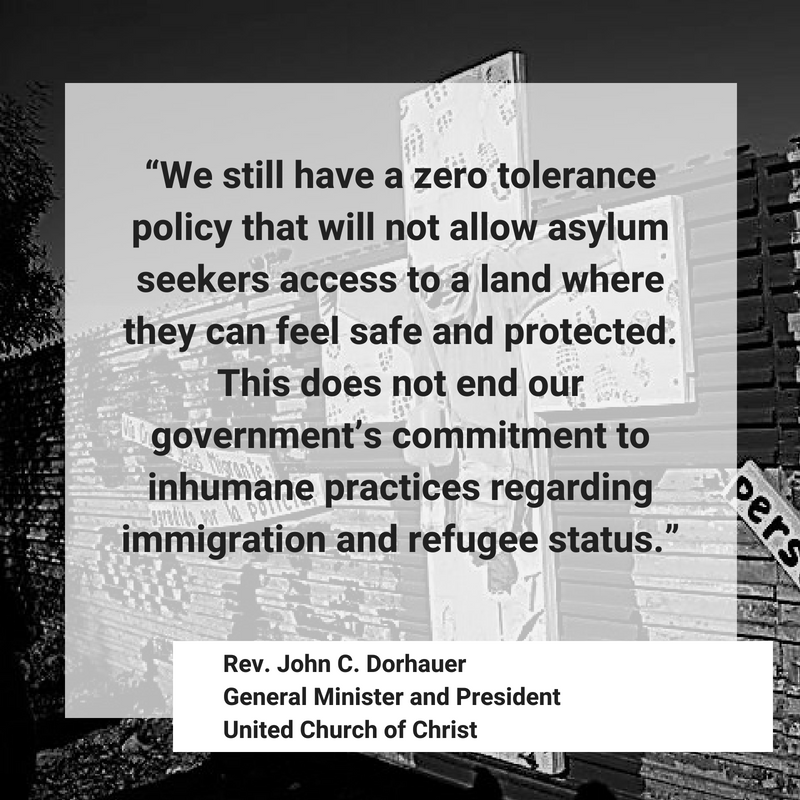 Prompted by public outrage, President Donald Trump stops the cruel separation of immigrant families at the border with an executive order. But advocates in the United Church of Christ continue to pressure Congress to change the laws. The ‘zero tolerance’ policy that continues to criminalize those undocumented border crossings will result in parents and children being detained together, at least for 20 days. The order signed Wednesday, June 20, does not override the 1993 Flores v. Reno Supreme Court case, which says that detained migrant children cannot be held in government detention facilities for a longer period. That means after that 20-day mark, children and their parents could still be separated.

In a statement issued after the executive order was announced, UCC General Minister and President the Rev. John Dorhauer urges people of faith to keep up the pressure — pushing the government to change U.S. immigration policy.

“The sights and sounds of children being terrorized by border patrol agents, crying as their parents were frisked, searched, cuffed and taken away — have horrified the world,” Dorhauer said. “Faith communities have united in a strong and urgent voice to lift up their outrage. And the voice did not go unheard. Our own Traci Blackmon has had meetings with high ranking Senators demanding a hearing on this policy, and asking that someone go and tour the facilities on a fact-finding mission. Many of our leaders in the United Church of Christ have held vigils, done letter-writing and phone calling campaigns, and visited detention centers of the offices of political leaders to protest this policy.”

Dorhauer acknowledged the president’s reversal, which will keep migrant families together, as “a huge victory.” 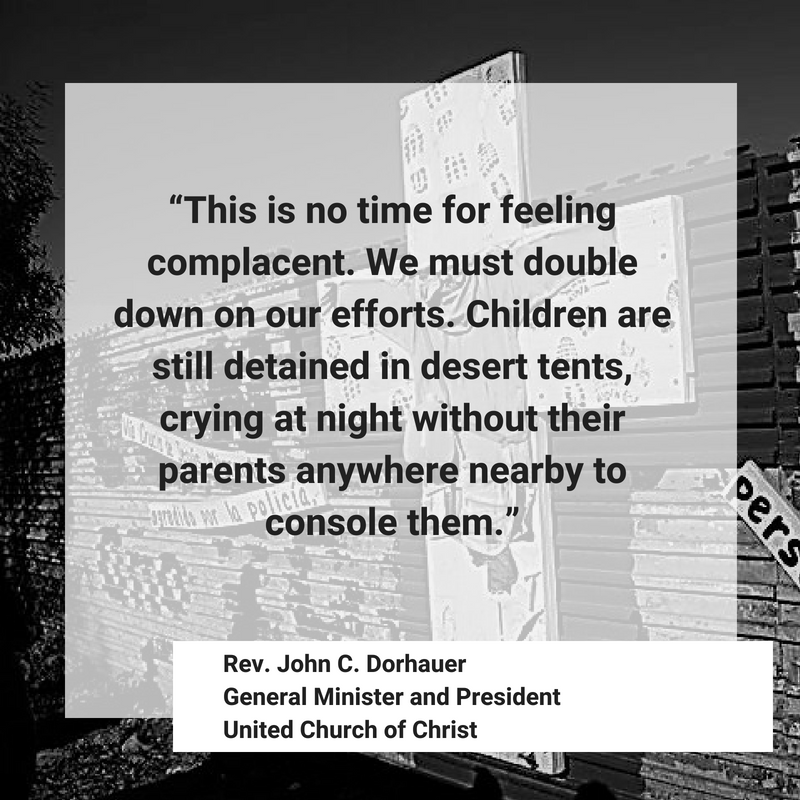 “But this is no time for congratulating ourselves or feeling complacent. We must double down on our efforts,” he continued. “Children are still detained in desert tents, crying at night without their parents anywhere nearby to console them. We have learned in the last day or two that parents have been deported back across the border, but their children have not been released. And we still have a zero tolerance policy that will not allow asylum seekers access to a land where they can feel safe and protected. This does not end our government’s commitment to inhumane practices regarding immigration and refugee status.”

As an Immigrant Welcoming Church, people of the United Church of Christ are being urged to pray and act — to join efforts with others on the frontlines of this movement for policy change.

Thursday afternoon, at 4pm ET/3pm CST/1pm PST, Justice & Local Church Ministries (JLCM) will host a webinar to outline the UCC’s current actions, alliances, and opportunities for public dissent of our nation’s current policies concerning children at the border. This time will also offer an opportunity to share the efforts of local churches and their allies. All are welcome and should register here:

The Rev. Noel Andersen, grassroots coordinator for Church World Service and organizer of the UCC Collaborative on Immigration, has helped to assemble an interfaith toolkit that offers several ways congregants can take action.

“The most important steps to be taking right now include educating and mobilizing your faith community to take action; making calls to Congress, writing opinion editorials, direct actions at ICE/CBP (Immigration & Customs Enforcement and Customs & Border Protection) offices or Representatives offices, bearing witness at mass trials, and donating to provide support to those congregations directly serving the most impacted people,” Andersen said.