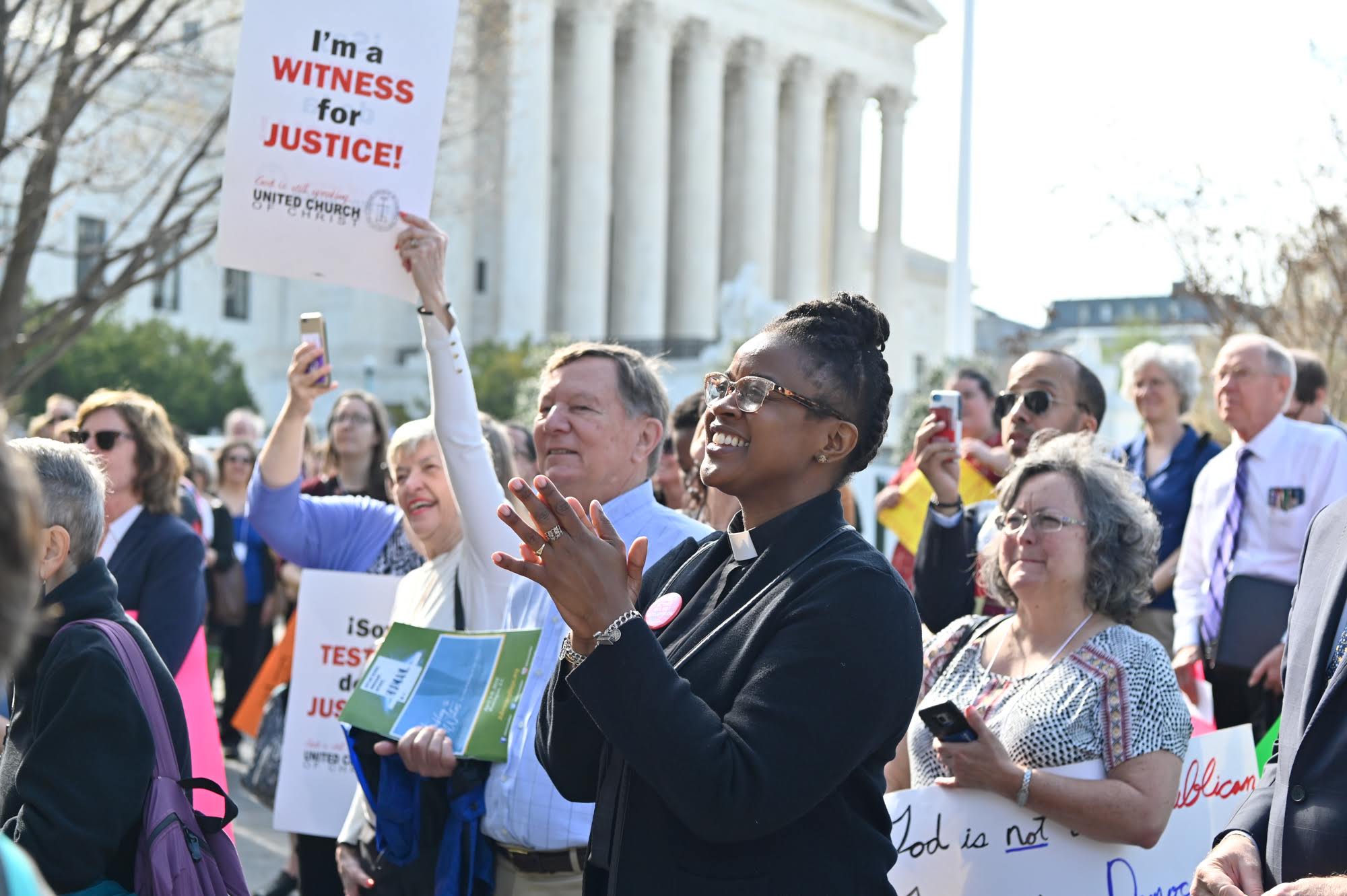 Madison Mayhew didn’t know what to expect during a weekend of good trouble for a just world. Working in Washington, D.C. on Ecumenical Advocacy Days (EAD), Mayhew, the United Church of Christ’s new Justice & Peace Policy Fellow, was both involved in leading and experiencing her first EAD. She joined about 600 people from a number of faith traditions gathered April 5-8, to grasp more about what justice advocacy is and to learn the tools they need to do the work.

“I had the opportunity to wear many different hats during the weekend, including training two state delegations before their lobby day. I was anticipating most of the group to have lobby experience, but the majority of the room had none,” Mayhew said. “It was a special experience to be able to translate the work we do in D.C. and empower attendees to take action here and back home.”

The weekend started for the UCC at First Congregational Church on Friday, during a pre-conference event, #GoodTrouble for a Just World. The April 5 session gathered justice leaders representing a range of issues and networks from across the denomination. They shared best practices around movement building and justice mobilizing in all settings of the UCC and beyond. 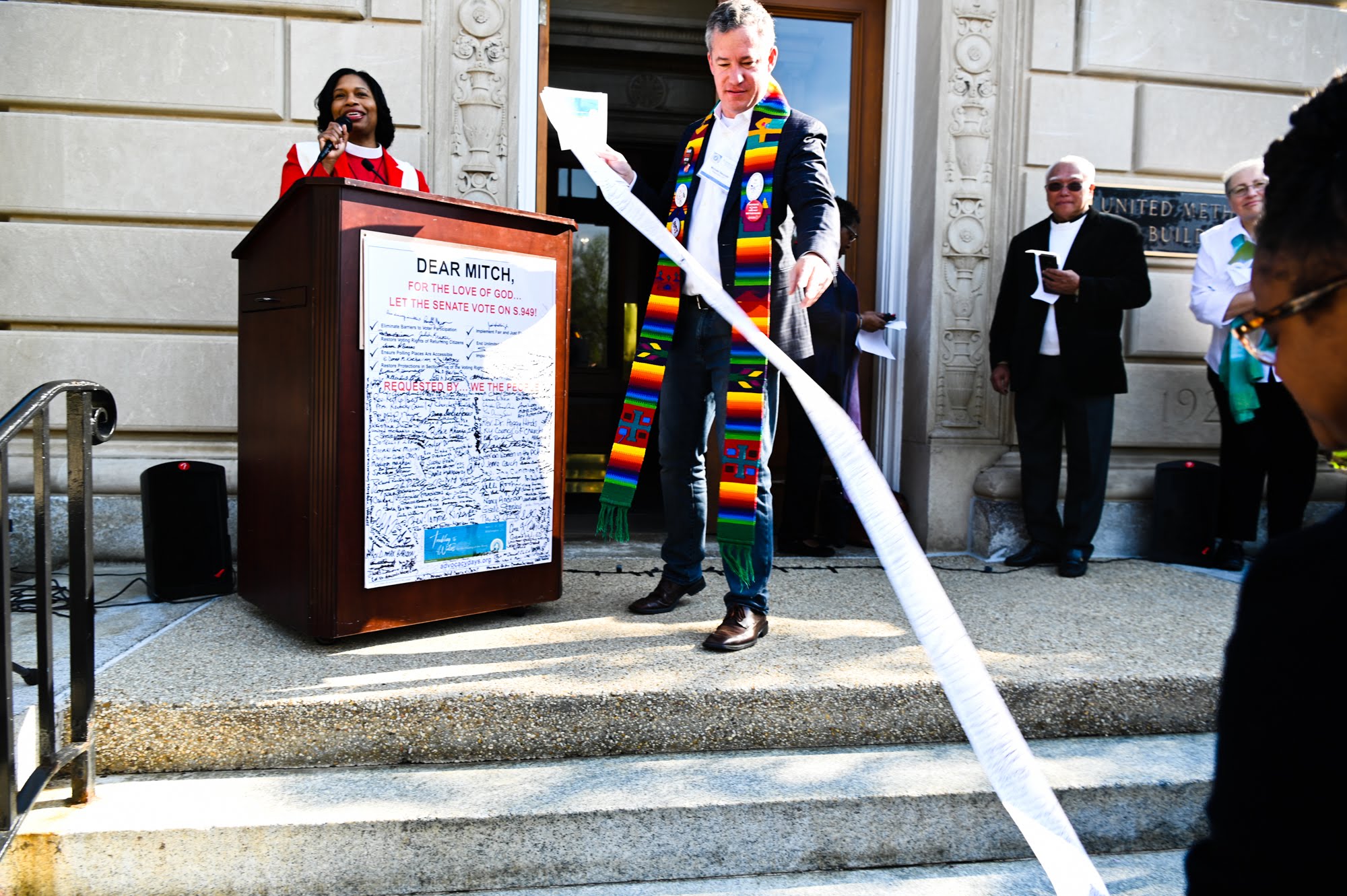 “We talked about ways we can build capacity for UCC justice advocacy moving forward and empower, energize and connect justice advocacy leaders in our congregations, associations and conferences,” said Sandy Sorensen, director of the UCC Washington, D.C. office.

On Saturday, participants from several different denominations came together for a series of interactive plenary sessions and workshops around issues including immigration, gun violence and voting rights. The Rev. Michael Neuroth, UCC international policy advocate, helped organize the Global Peace and Security workshops at the conference.

“The theme for this year deeply resonated with me and I think with many who attended. The call to ‘trouble the waters’ was based both in scripture (John 5:1-9) as well as Rep. John Lewis’ #GoodTrouble Twitter campaign,” Neuroth said. “Throughout the weekend, the Spirit was stirring in our worship and workshops and on Monday, we ‘troubled the waters’ in D.C. by calling on policy makers to pass legislation to strengthen voting rights in the U.S. and human rights abroad.” 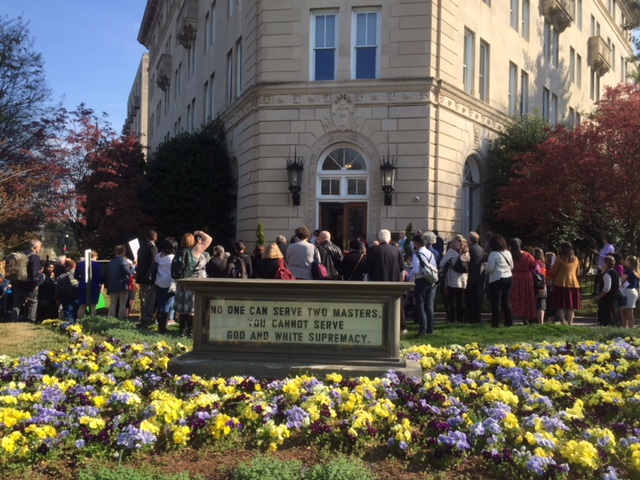 Sunday, groups gathered by state to learn more about lobbying their lawmakers, which was planned for Monday.

Following a vigil outside the UCC offices at the Methodist Building on the morning of April 8, an EAD delegation headed off to Senate Majority Leader Mitch McConnell’s office carrying a letter bearing hundreds of signatures supporting a vote on S949. The bill, companion legislation to HR 1, which passed in the House, would eliminate barriers to fair voter participation, restore the voting rights of returning citizens and address the unlimited influence of corporate campaign contributions in elections.

More than 50 people sang ‘Wading in the Water’ as they moved through the streets to the Russell Senate Office Building and hummed their way through the halls.

“I was particularly moved by our public witness on Monday,” Neuroth continued. “It was a spiritual moment in which it felt like the waters were being troubled.”

“It was extremely encouraging to see this wide spectrum of faith traditions working together to improve our democracy,” said UCC minister the Rev. Kent Gilbert. 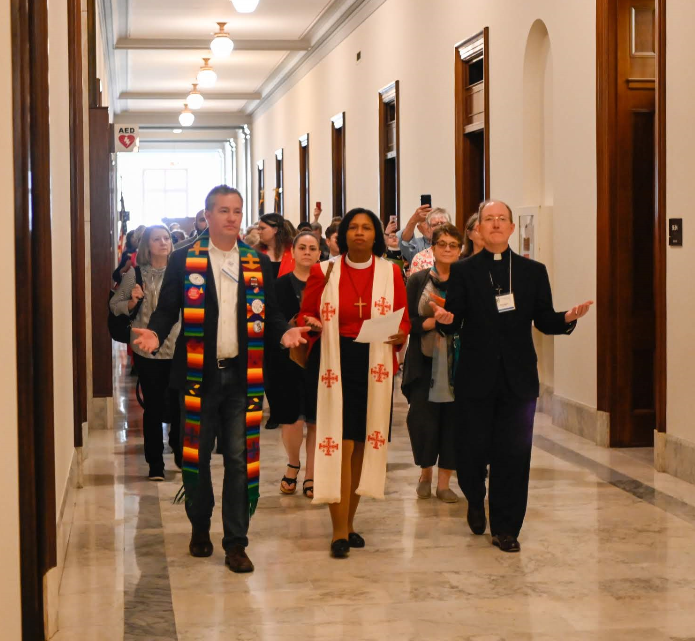 Gilbert, president of the Kentucky Council of Churches and pastor of Union Church in Berea, Kentucky, helped lead the procession to McConnell’s office.

“It’s important that people of faith remember not just the ‘mercy’ part of following Christ, but also the ‘righteousness’ side. I mean, if we love God’s people, it is worth taking action that prevents the NEED for mercy in the first place,” Gilbert continued. “In a world so focused on division and hatred, churches coming together is a potent sign of Christ’s ‘Good news.’ I cannot overstate the value of seeing leaders from all traditions working together to help everyone vote. This is what true leadership would look like on Capitol Hill, and it is imperative that if politicians cannot model it, the church of Jesus must.”

“The EAD advocacy and public witness for strengthening voting rights is timely and critical as we move into a presidential election campaign in 2020,” Sorensen said. “It is unconscionable that we have we have less access to free and fair elections than we did in 1965. If the right to vote is at the heart of democratic process, we have a serious heart condition.”

“I think the participants were inspired by the conference and Monday action,” Neuroth said. “My hope is that all of us will be inspired to keep up the momentum at home in our local churches and congressional districts. Given the upcoming 2020 election, we must do all we can to ensure that all are given a voice and vote.”