#DalitsNotCows #MuslimsNotCows: The struggle for equality & just peace in India

It began as an ordinary summer day in the town of Una in Gujarat, India. Except on this day a mini-truck appeared in town and dropped a cow carcass outside the city hall. Then, there was another and another. Before long, there were several dozen carcasses at the administrative building. The scene was repeated across several small towns in the state, where the group of people traditionally responsible for the disposing of dead bovines refused to do so. This was a protest. 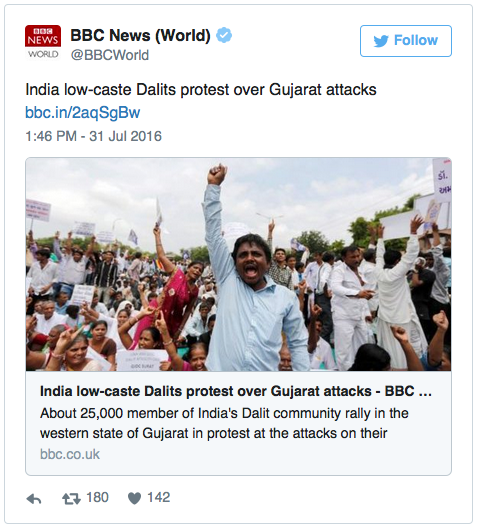 A week earlier, a horrific video had surfaced which showed four Dalit youths, including a fifteen year old boy, being stripped, tied to a car and brutally assaulted with heavy iron pipes. The youths were attacked because they were caught skinning a cow. Cows are considered to be sacred by members of the so-called “upper” caste groups, and cow slaughter is legally a punishable offence in several states in India. In this case the youths were accused of killing the cow despite their claims that the cow had died of natural causes. The perpetrators, the self-proclaimed cow protectors, recorded the beating and distributed it as a “lesson” to other Dalits.

The video went viral, but not for the reasons intended.

This violence against Dalits is nothing new, it is in fact older than two millennia. Dalits are the people outside the caste system who have been relegated to do the occupations considered unclean by members of the “upper” caste groups. Touching a dead animal is one of them. There are more than two hundred million Dalits in India alone.

Every hour, two Dalits are assaulted. Every day three Dalit women are raped, two Dalits are murdered, and two Dalit homes are torched. Ever since the election of a Hindu nationalist government in 2014, these “cow-protector” groups have emerged and in several cases have been involved in the lynching, murder and assault on Dalit and Muslim people in India. The government mostly remains silent and continues to use the symbol of the sacred cow and the language of cow-protection as a religious and cultural duty, especially in election campaigns.

The protests that followed in the wake of this incident are still raging in India. So deep is the suffering and oppression of the Dalit community that some have attempted suicide publicly to expose and call attention to their plight.

The unity of Dalits, and the power of their protest in the face of such ongoing atrocities, is historic and perhaps unprecedented. While the Dalit struggle for justice and peace is as old as the oppression, this marks a new period of resistance. Together with other new voices calling for justice in America and across the world, the Dalit protests testify that a peace built on injustice is no peace at all, and there can be no peace without justice.

The United Church of Christ has affirmed this truth for more than thirty years as part of the Just Peace Church pronouncement. Distinguishing itself from Just War and Pacifist traditions, the Just Peace framework was adopted during the height of Cold-War tensions.

In today’s context, with newer voices for justice in the public sphere, the UCC engages and supports these voices under the banner of Just Peace. Nonviolent direct action, as exemplified by the Dalit protests, is one of ten Just Peacemaking practices developed by scholars and recognized by the UCC at General Synod in 2015.

This fall UCC members have an opportunity to support the denominations historic witness and commit to the ongoing work of peacemaking. Join us as we mark the September 18, 2016 as Just Peace Sunday, a day to mark our commitment as a church to the pursuit of Just Peace.

Roy Komanapalli is a seminarian at Princeton Theological Seminary.