The Sin of Nuclear Weapons

August 6 and August 9 are the anniversaries of the only two instances where nuclear weapons were used as a tool of warfare. August 6, 1945 at 8:15am was when the first atomic bomb was dropped over Hiroshima and August 9, 1945 at 11:01am was when the second was dropped over Nagasaki. Both bombs leveled the cities and killed more than 150,000 people, half of whom were killed the day of the bombings from the explosion and ensuing fire, while the other half were killed in the days, weeks, months, and years that followed. The exact number of victims is still unknown. 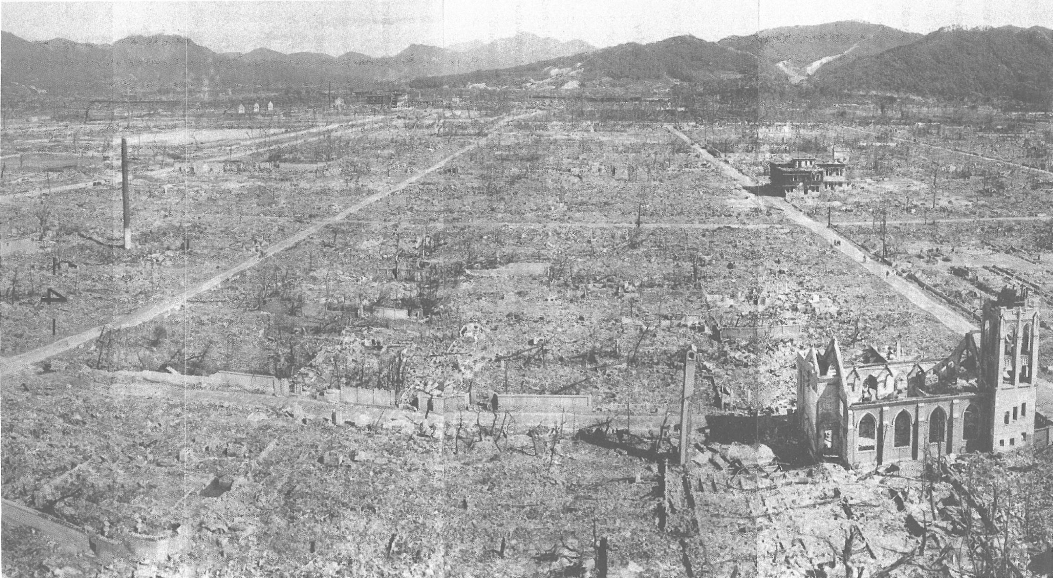 I recently returned from a trip to Japan and Korea. Part of the trip included a peace conference in Hiroshima with study tours of the city, where we learned about the atomic bombing by visiting sites and listening to stories of survivors. I saw before and after photos of the city showing how it was completely destroyed. The majority of buildings were made out of wood and the only ones that remained standing after the fire were those buildings made from concrete or reinforced by steel, like a United Church of Christ in Japan church, as you can see in this photo. Even those buildings that remained standing were heavily damaged.

The entire world discovered the destructive capabilities of nuclear weapons on those two days. Prior to this, their use and consequences were theoretical, estimated by scientists conducting tests. We learned that nuclear weapons are powerful explosives that can do immense immediate damage and leave radiation in the air, water, and soil, which causes harm for months and years after. Scientists are still studying the long-term effects of these two atomic bombs on the local population and whether or not subsequent generations are more prone to cancer or other illnesses.

Despite all the evidence that has been collected over the past 70 years from the use and testing of nuclear weapons, countries still have stockpiles that are hundreds of times more powerful than those bombs dropped in Japan, along with the knowledge and capabilities to produce more. Countries, particularly the US, have used these stockpiles as threats (public and private) against various countries’ actions from 1945 through today. It is long past time this situation was ended.

The UCC has been against nuclear weapons since our beginning. The 1959 General Synod 2 resolution, A Call to Christian Action in Society, includes a call for churches and their members to work toward “effective international control and reduction of all national armaments, including testing of nuclear weapons.” We reaffirmed this commitment in 1985 with the passing of the resolution, Pronouncement on Affirming the United Church of Christ as a Just Peace Church, which included a call for “an international ban on the development, testing, use, and possession of nuclear and biochemical weapons of mass destruction.” Most recently, in 2011 we passed a resolution that called for the US to ratify the Comprehensive Nuclear Test Ban Treaty, which was signed by the United States in 1996, but still hasn’t been ratified by the Senate.

Our witness to the dangers of nuclear weapons began with the global witness of the bombings of Hiroshima and Nagasaki, has continued through our solidarity with the victims of the US atomic testing in the Marshall Islands (1946-1958), to today with our advocacy for a denuclearized Korean Peninsula and an Iran without nuclear weapons. We will continue this work until it is no longer necessary.

Rebekah Choate is the Associate for Global Advocacy and Education for the Global Ministries of the United Church of Christ and Christian Church (Disciples of Christ).