The Fierce Love of Standing Rock(s)

What follows is an excerpt from a longer reflection by the Rev. Rob Mark of Church of the Covenant in Boston. In this reflection, Mark speaks of his visit to the Oceti Sakowin camp in Standing Rock as part of an in which over 500 clergy arrived to join in solidarity with the Standing Rock Sioux Nation and the allied Water Protectors who are opposing the Dakota Access Pipeline. 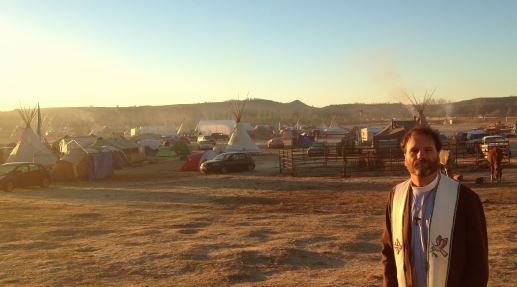 The first words I heard from a Sioux man named Nicolas as we entered the Oceti Sakowin spirit-camp was, “Brother, welcome.” Although our skin colors and socially allotted privilege were very different – our ancestral histories tracing back to opposite sides of the proverbial Thanksgiving table – in his view, we were siblings. We were family. And that simple acknowledgement had a profound affect on me. It changed how I felt, how I carried myself the rest of the two days there. This radical welcoming felt like a blessing and was again and again conveyed to us from other indigenous Water Protectors. It also felt to me like a baptismal shower of forgiveness. Unspoken forgiveness for the ways of white domination, theft, and occupation of indigenous lives and land that my skin color and Christian history (in part) represent.

As I walked around the incredibly family-friendly, peaceful encampment, I heard how native Water Protectors (not protestors) refer to others as relatives – regardless of their tribal or often even non-indigenous identities. And it is from this place of centered love of neighbor across difference, that the Protectors camp, pray, and act. As our group of clergy and native elders walked in song and prayer to the militarized barricaded bridge over troubled waters that serves as an intense demarcation zone blocking public state highway 1806 near where the pipeline is being built – I was deeply moved to hear Water Protectors praying for the riot police and Dakota Access Pipeline workers blocking the way. Multiple voices called out “We love you, we forgive you.” The words of Jesus came to mind, “Just as you did it to one of the least of these who are members of my family, you did it to me.” The lesson that we are all one family is one of the many I pray that we as a nation are learning from Standing Rock. It is certainly a lesson our post-election country needs to take to heart. While we may have voted differently, we are one family. One family that drinks the same water. One family that must come together in the Christ-like inspired spirit of fierce love to rise up clearly against any politician, policy or agenda that promotes racism, bigotry, misogyny, hatred, Islamophobia, homophobia or fear.

Brothers and sisters, what is unfolding at Standing Rock is a profound example of fierce love that defines today’s epicenter of civil and religious resistance against tyranny, nationalism, and fear in our land. While in North Dakota, I saw firsthand how, once again, Native Americans are facing defamation, exclusion, and abuse at the hands of our country in order to protect and serve the profits of wealthy corporate interests. But I also saw how they are standing up non-violently in the spirit of fierce love, love of enemy despite being met with incredible militarized force, rubber bullets, water cannons, concussion grenades, riot police, attack dogs and clouds of teargas. They are standing up against the racism that persists in 2016 and continues to lead to more broken treaties and environmental injustice. Lest we forget, the original plan for this pipeline was to cross under the Missouri river just north of Bismarck before white communities complained, and so the location was moved to just north of the Standing Rock Reservation.

There is a Lakota prophecy that says if a black snake comes and spreads across the land, the world will end. Those at Standing Rock see the Dakota access pipeline as that black snake, filled with dirty, water-polluting black oil. And seeing this pipeline firsthand, up close and personal, “protected” on either side with militarized barbed wire to keep the true Protectors away, snaking across God’s sacred landscape disrupting sacred burial grounds and threatening water, there was no question for me that this climate changing pipeline has the potential to be world-ending. And that is why this cause should be everyone’s cause. Especially those of us who seek to follow Christ. We as part of the body of Christ have a vital role to play in joining in solidarity and accompaniment with these prophetic Water Protectors.