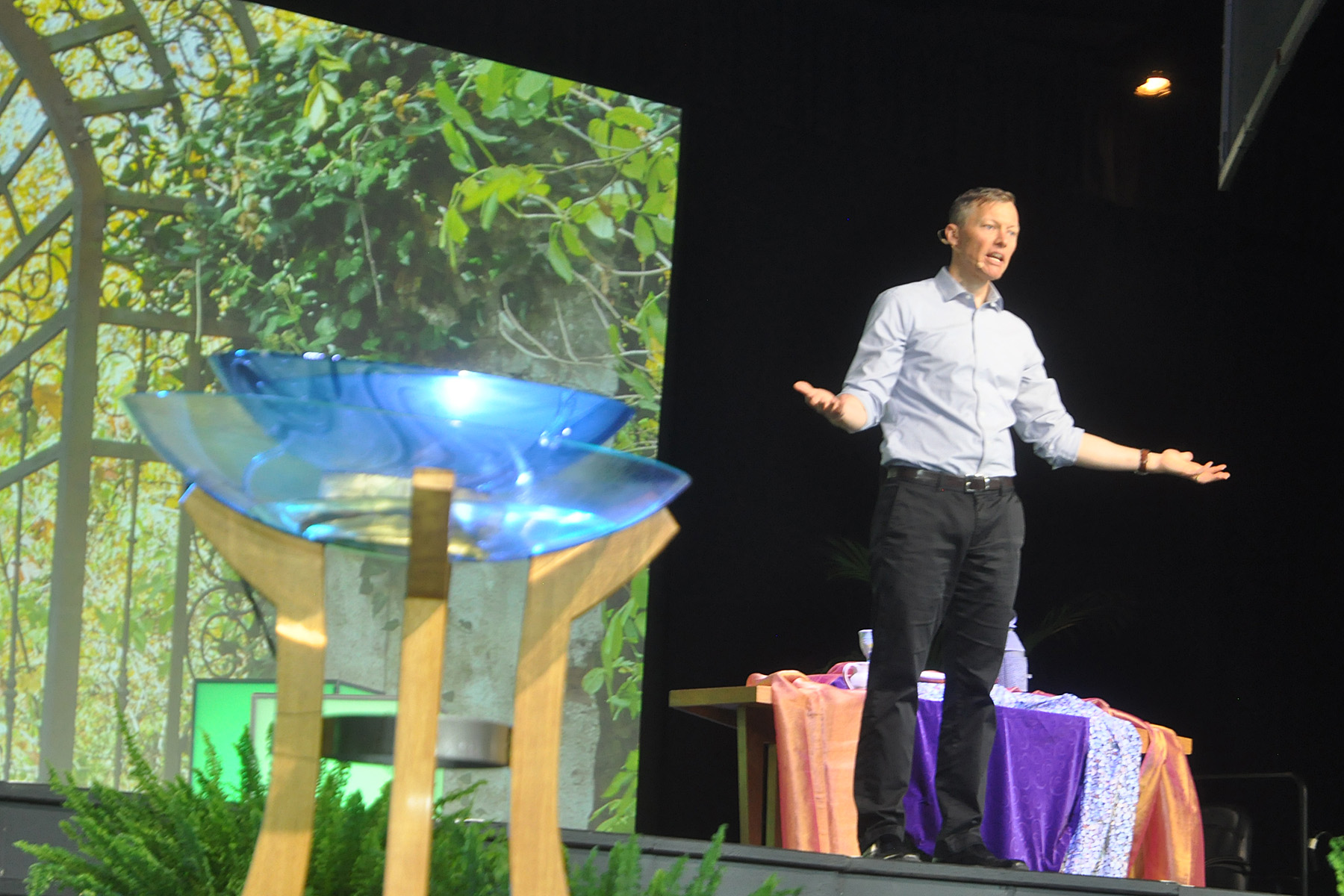 Matthew Desmond, author of the Pulitzer-Prize-winning book Evicted, painted a stark picture for United Church of Christ delegates on Saturday, showing how lack of affordable housing is "one of the most morally urgent issues in America."

And then he told them we could, as a country, fix the problem if we choose to.

Desmond gave the keynote address of the UCC's biennial General Synod, meeting June 21-25 at Milwaukee's Wisconsin Center. He used the story of Arleen, the mother of one of several Milwaukee families whose stories he chronicled in his book, to illustrate how evictions are pushing more and more families who live below the poverty line into despair and often homelessness.

He told how Arleen and her sons were first evicted from their apartment after her 13-year-old threw a snowball at a car. The driver of the car angrily chased the boy back to his apartment and kicked in the door. The landlord evicted the family because of the damage. Fast forward through more evictions and ever-worsening housing situations, and the family found itself living in an apartment with a hole in the window and a door that wouldn’t lock that was costing Arleen 88 percent of her monthly welfare check  just for rent.

Arleen's story--as Desmond showed in his book, the UCC's "All Church Read"selection for 2019--is far from unique, he said. The majority of poor families who rent homes in America spend more than half of their income on rent, he said, and 25 percent spend more than 70 percent of their income on rent and utilities. Yet only one in four poor families qualifies for housing assistance.

"In these conditions, you don't have to make a huge mistake or have a huge catastrophic emergency to get evicted," Desmond said. "Something like a snowball can do it. It's more inability than irresponsibility."

Desmond pointed out that we have “affirmed provisions for old age, access to 12 years of education, and basic nutrition to be rights in this country. Why? Because without those things, human flourishing and economic vitality is impossible.

“Housing should be a right in this country," he asserted, "because without stable shelter, everything else falls apart."

The good news, Desmond said, is that the problem is not impossible to solve. He reminded everyone that a few generations ago, American cities were filled with slums and outhouses, and that we have made huge strides in improving public housing since then.

"Sometimes, when we gather like this, and we have conversations about racism or homelessness or poverty, those problems can feel so heavy," he acknowledged. "We can start telling ourselves, 'We fought the war on poverty, and poverty won,' or 'We've thrown trillions of dollars at this problem, and nothing ever works.' Those are empirically false claims. When we as a nation have wanted to take on big problems, we’ve come up with big solutions."

One possible solution, Desmond said, would be to expand the affordable choice housing voucher program to make it available to everyone below the poverty line, so participants would only be required to pay 30 percent of their income for housing.

"That would fundamentally change the face of poverty in America," he said. "That would drive down family homelessness and eviction."

Desmond said two questions are always raised about this solution.

This first: would it disincentivize people from working? Research has shown, he said, that when people begin receiving such housing assistance, they slightly reduce their work hours but do not drop out of the work force. Universally, he said, they begin spending more money on food.

"The status quo is a much bigger threat to self-sufficiency and work than any affordable housing program," he said. "Families that are taxed and crushed by the high cost of housing can't afford college classes, or job training so they can plug into a better part of the labor market. Many can't afford to hold their home down long enough, so they lose their jobs."

The second question, he said,is: can we afford it?

"It’s totally expensive," he said. "We can totally afford it."

A bipartisan policy center studied the idea a few years ago and found that it would cost $22 billion a year to implement, he said, although that’s without calculating in the potential savings in social services costs.

“That’s not a small figure – but it’s well within our capacity,” he said. “We have the money, we just make decisions about how to spend it.”

"We already have a universal housing program. It's an entitlement. It's just not for poor people," he said. "The year Arleen got evicted from 13th Street, we as a nation spent about $41 billion on direct housing assistance. That same year, we spent $170 billion on homeowner tax benefits."

"It's really hard to think of a social policy that does a better job of amplifying our racial and economic inequality than our current housing policy does," he said. "So if we're going to spend the bulk of public dollars on the rich, at least when it comes to housing, let's just be honest about that. Let's just own up to that. Be like 'I like it this way – this is a social contract I will sign my name to' instead of repeating this canard that the richest country on the planet can't afford to do more."

"If poverty persists in America, it is not for lack of resources," he said. "This degree of inequality, this level of social suffering. this blunting of human beauty and potential and this whole denial of a basic human need?--this isn't us. This doesn't have to be us. By no American values is this situation justifiable. There's no ethical code, there's no piece of scripture, no holy teaching that we can summon to defend what we have allowed this country to become."

Desmond encouraged congregations to begin tackling the housing issue in their own backyards by connecting with local organizations through www.justshelter.org

Tiffany Vail is the Associate Conference Minister for the Connecticut, Massachusetts and Rhode Island conferences of the United Church of Christ.