The diversity of the United Church of Christ was celebrated in languages, music, vestments, and symbols Friday, June 21, as General Synod 32 opened with worship underscoring the Synod’s theme “Let your light shine before others.”

But in a Litany of Confession, church leaders also catalogued the church’s “complicity in the sins of colonialism, slavery and genocide.” Worshipers responded by calling on God, to “shine on us your light, tu luz, of restorative justice.”

In her sermon based on Matthew 5: 13-16, the Rev. Kaji Spellman Douša, senior pastor of The Park Avenue Christian Church (DOC/UCC) in Manhattan, (known as “The Park”), called on participants to embrace their “saltiness” as they worked to shine their own lights and encourage the lights of others. Douša was the first of the four clergywomen who will deliver the sermons during this Synod’s worship services. 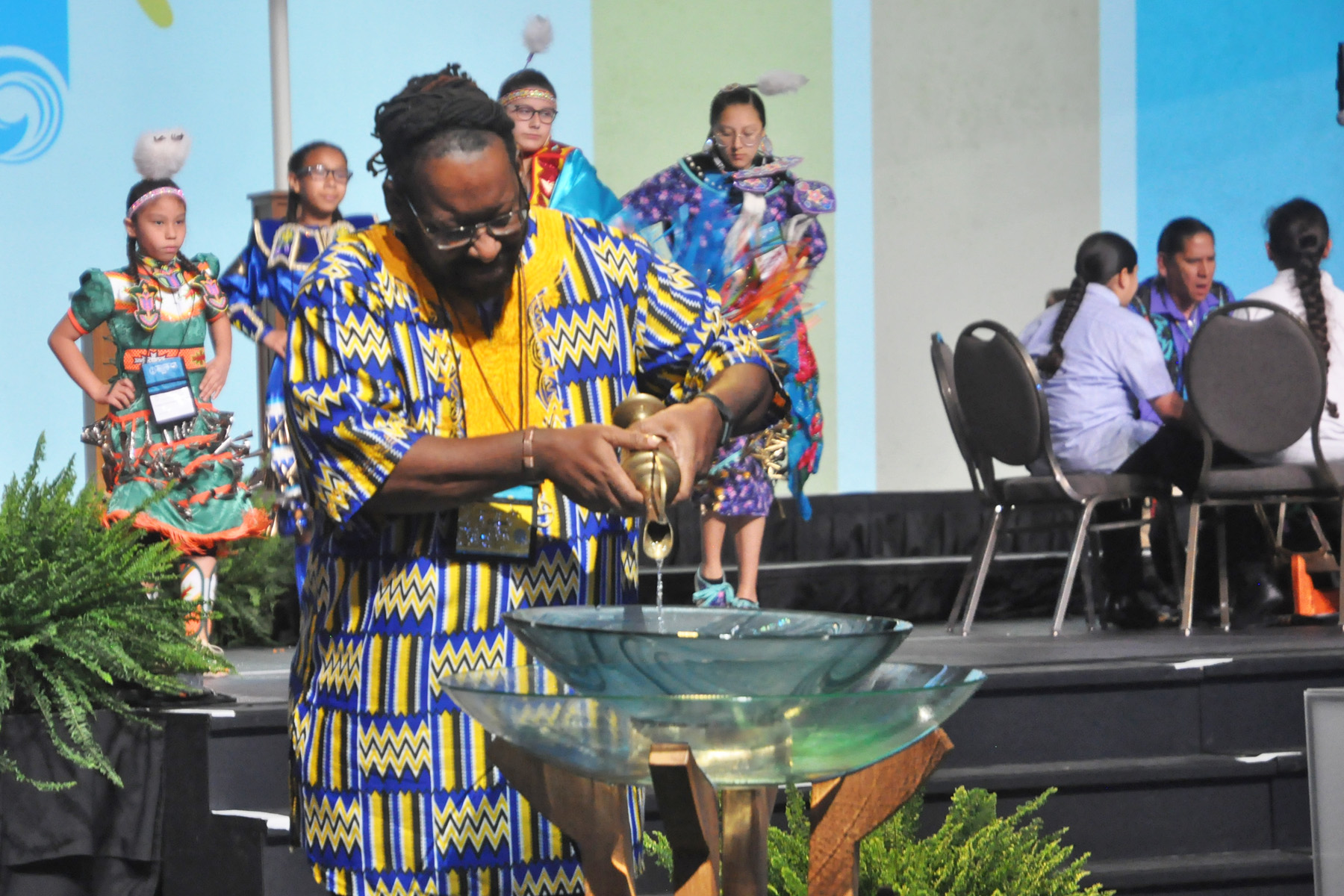 “If we want salt to be salt and light to be light all over the world,” Douša said, “then we’d better protect it. Every one of us was born to be seen and heard. This will not work without strategic, consistent, cross-generational, trans-national, pro-God’s Creation, gender-expansive, global, communal protection.”

The service began with songs from The Park’s Praise and Worship Band, sung in English, Tagalog, and Spanish. Then drummers and dancers from the Indian Community School of Milwaukee set the scene as representatives of the UCC’s Council for Racial and Ethnic Ministries (COREM) poured water into a baptismal font that, along with a model of The Amistad Cross, was commissioned for this year’s Synod and was dedicated as part of the opening worship. 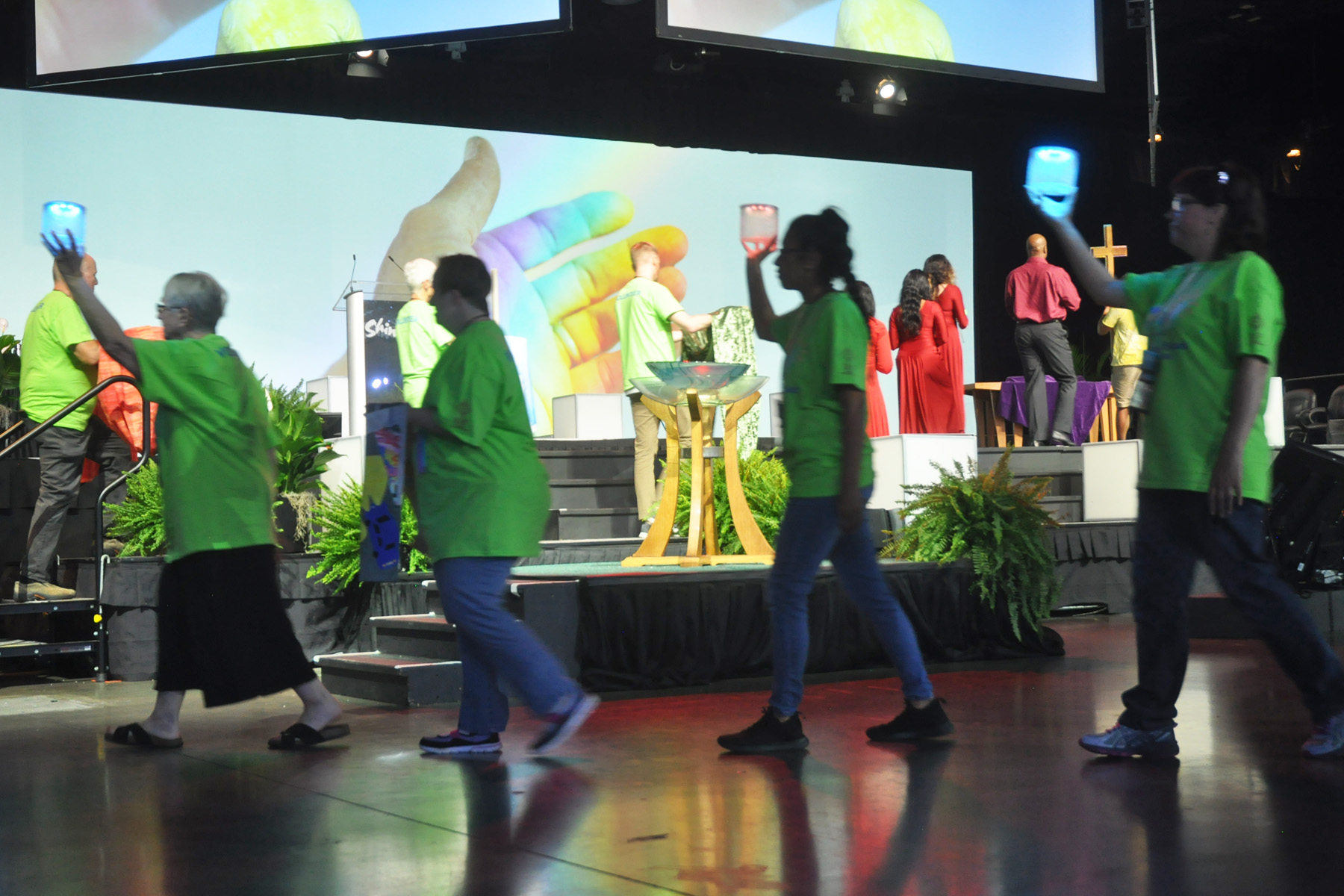 The centerpiece of the worship was a Procession of Light introduced in English and Spanish by the Rev. Dr. Jeanette Zaragoza De Léon, The Park’s pastor for multi-lingual and cross-sectional worship, and the author of the service’s texts. “Light Bearers,” drawn from the Wisconsin Conference’s Local Arrangements Committee and the Youth at Synod, processed down the center aisle of the worship space, carrying lights, lanterns and multi-colored cloths to assemble the altar, while a liturgical dance troupe organized for the Synod modeled the gesture of Light.

The Scripture was then read in Lingala by the Rev. Christine Ikete, director of the women’s desk of the Community of Disciples of Christ in Congo; in Arabic by the Rev. Dr. Andrea Zaki Stephanous, president of the Protestant Churches of Egypt; in Armenian by the Rev. Nayiri Kajian, general minister of the Ohio Conference’s Living Water Association; in English by Rev. David Bahr, senior minister of Parkhill United Church of Christ in Denver; and in Spanish by Yesenia Menéndez Sanchez, a member of the UCC Board of Directors and Iglesia Hispana de la Comunidad UCC in Boston. 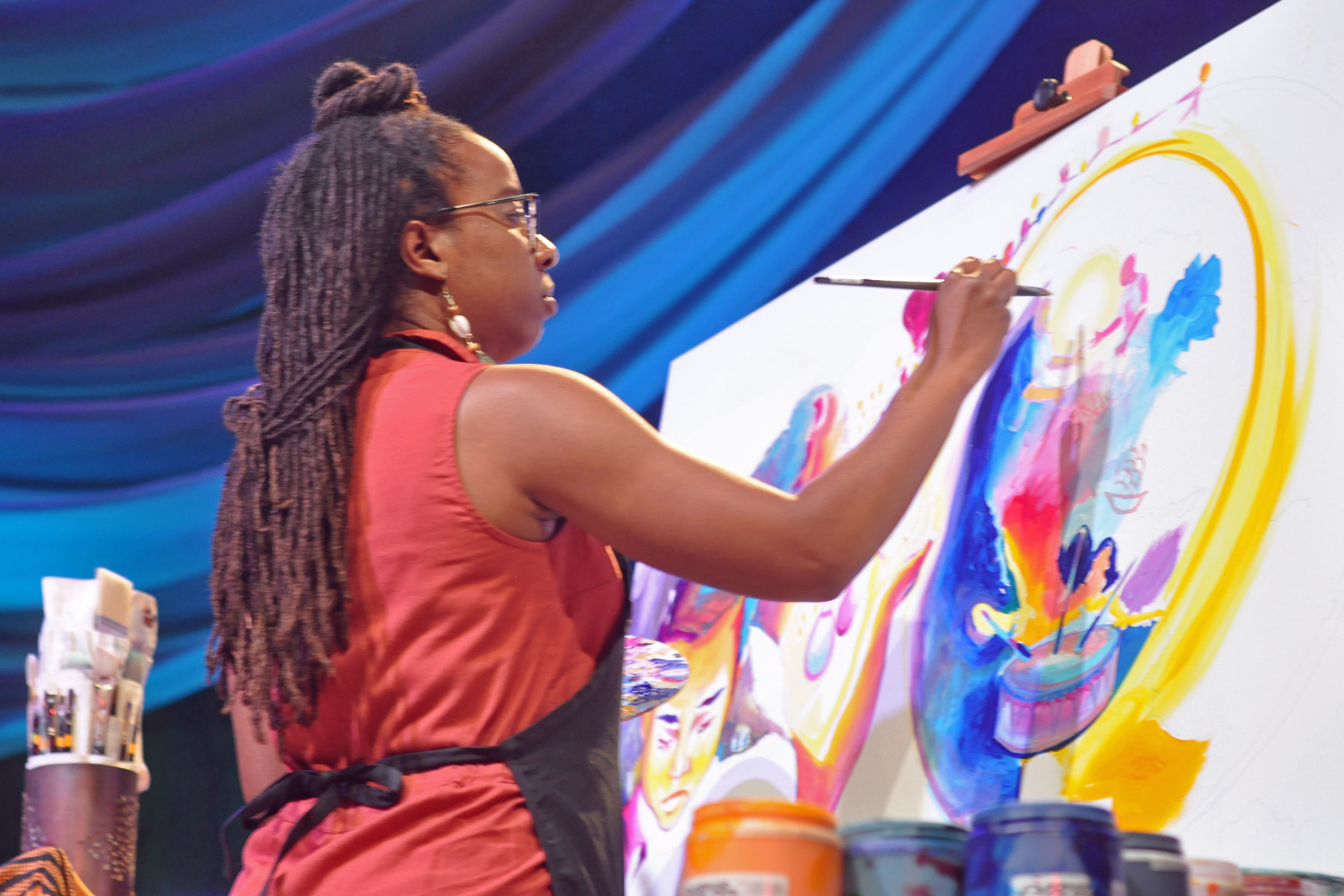 Throughout the service, Tia Richardson, a community artist named as the Milwaukee Art Board’s Artist of the Year in 2018, worked on a painting that will be the basis of her theological reflection later during the National gathering.

In her sermon, Douša reflected on her work in New York with the New Sanctuary Coalition. She described how her co-chair, Ravi Ragbir, was arrested on a routine check-in with U.S. Immigration and Customs Enforcement and threatened with immediate deportation to his native Trinidad. But, she said, “the people showed up. We were not going to let him be silenced, trampled, cast aside, intimidated or deterred. And I would contend that Jesus is counting on Ravi to be salt and light, while counting on us to be sure that Ravi and people like him can keep on keepin’ on,”

In January 2018, a U.S. district judge ordered Ragbir released, finding, in Douša’s words, that his threatened deportation was an “act of retaliation against his activism and outspoken advocacy. The word the court used was ‘silencing.’ ” Douša herself ended up on a “hit list” compiled by the Department of Homeland Security of activists and journalists who had traveled to the southern border to support the migrant caravan. 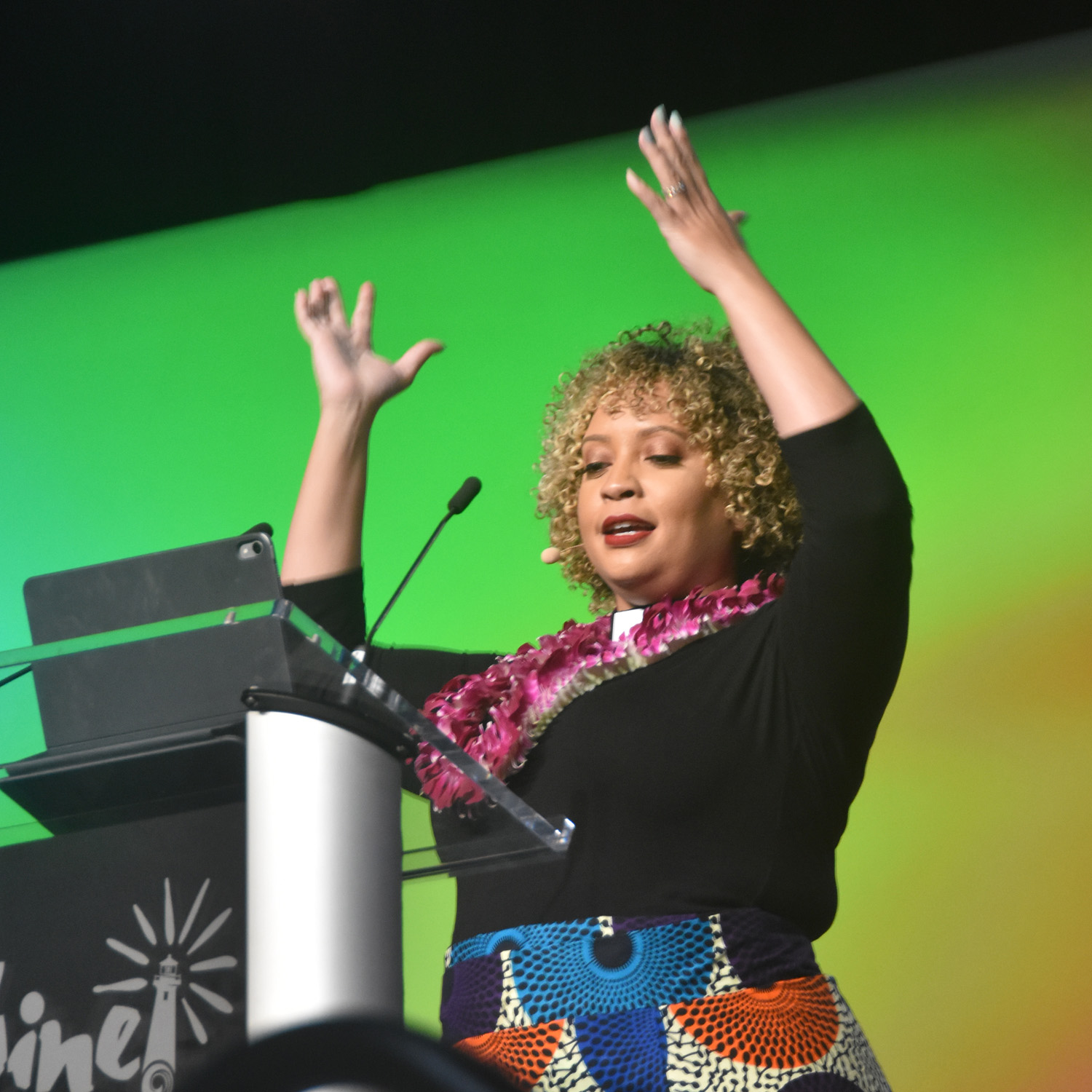 Douša noted that since the last General Synod, the number of UCC churches declaring themselves to be Sanctuary and Immigrant Welcoming Congregations had grown to 248. “248 is wonderful and it is insufficient,” she declared. “Meanwhile, there are tens of thousands of migrants who are being held in internment camps and prisons—most of whom are in the country legally, by the way.” She called on Synod-goers “to work to triple” that number by the end of the summer, “and sponsor people who need to get out of these camps. It is our Christian obligation to do this work because we refuse to have history look back on us and say: ‘Where were we when evil tried to stomp out our neighbor’s light?’ ”

In closing, Douša returned to her Scriptural text, recalling that “Jesus talked about lights under bushels.” But, she observed, “a flame that burns under a basket has kindling.”

“Whenever they try to cover your light, take that act of aggression against you and turn it around and burn. Burn with the Holy Spirit. Burn like the fire of Pentecost. Burn with the power of God! A fire that burns, but shall not consume.”

At the close of worship, attendees joined in singing the traditional South African hymn “Siyahamba” (“We Are Marching in the Light of God”), transitioning to “We Are Working in the Light of God,” as the Synod dancers passed the opening gavel to the Synod moderator and vice moderator. Moderator Norman Williams declared that a quorum had been achieved, began the opening plenary.