Speak Out With Our Lives : A Review by Rev. Charles Busch 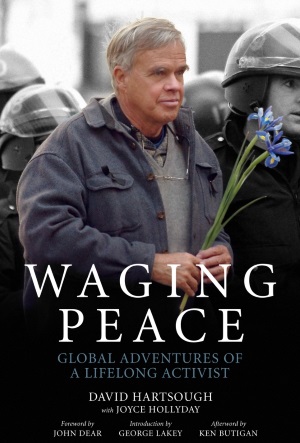 On the high shelf of my home library are books by the six peacemakers who have most influenced me---Gandhi, Martin Luther King Jr., Dorothy Day, Thich Nhat Hanh, Abraham Heschel, and Daniel Berrigan.  Having read, Waging Peace, I am adding a seventh: David Hartsough.

Although Hartsough has been engaged in peace building in countless countries for the past sixty years, his humble manner and inclusiveness have made prominent, not his name, but his message: If we are really concerned about peace, we must speak out with our lives to bring peace about.

I first met David in 2013, in Portland, Oregon, at a planning meeting for the World Beyond War movement.  I didn’t recognize his name, though later I found him listed in the index of a number of my peace books.  At the end of the meeting, having experienced David, I thought: “So this is what the Beatitudes look like.”

Hartsough begins his autobiography, Waging Peace, with an incident at a coffee shop sit-in during the Civil Rights movement in Virginia, in 1960.  It was the second day of the sit-in and David, a college student, was seated at the counter.  Hearing a hostile voice behind him, he turned and was confronted by a man whose face was filled with hate.  “He was threatening to thrust his knife---its blade just inches away from me---through my heart.  We were both shaking.”  With only seconds to respond, David spoke words rehearsed during hours of nonviolent role play: “Friend, do what you believe is right, and I will still try to love you.”  The man stared at David, lowered his knife and walked out.

This early experience, to go and stand with those experiencing injustice and violence, became the compelling pattern of David’s life.  The son of a Quaker mother and Congregational minister father, he learned nonviolence as a way of life, and as the way to affect change.  Called to a life of peacemaking, he asked: What am I willing to do to stop the killing?

During the Vietnam War, Hartsough became a Conscientious Objector, and through the years, a lobbyist in Washington for peace, and a relentless activist against U.S. Defense budgets, nuclear arms, weapon development, weapon shipments, the training of torturers, clandestine and drone assassinations, and the U.S.’s serial wars.  He addressed the truth of Martin Luther King’s words, “The greatest purveyor of violence in the world: my own government.”

Hartsough’s peacemaking did not stop at the U.S. border, or any border.  As a “citizen diplomat,” he joined nonviolent activists in countries around the world, including Palestine, Israel, El Salvador, the Philippines, Russia, Mexico, Iran, and Kosovo.  These efforts culminated in 2003, when David co-founded the Nonviolent Peaceforce---an unarmed, trained, paid corps of civilians who, by the hundreds, enter conflict zones to provide a protective presence, and facilitate a peaceful resolution of conflicts..  Today, Peaceforce teams are deployed in the Philippines, South Sudan, Myanmar, and being developed in Syria.

Reading Waging Peace, I’m heartened by Hartsough’s example, and encouraged to risk more in my own peace ministry.  I recommend his book to my sisters and brothers in the United Church of Christ.  Read and study it together.  Keep company with his gentle humanity, and the force of his activism.  His story can help us become the Just Peace Church the world needs us to be.

The challenge for me in reading Waging Peace, is to not compare my own modest efforts with the extent and significance of Hartsough’s peacemaking.  As if anticipating this reaction in his readers, David relates an anecdote about his Quaker mother, Ruth.  In 1959, the Hartsough family lived near Philadelphia, PA.  The largest bioweapons facility in the world was located nearby at Fort Detrick in Maryland.  Among the weapons produced there was “Q Fever,” a bacterium which can kill entire populations.  In protest, Quakers on the east coast began a silent prayer vigil at the gates of the Fort.  It went on, day after day, for three years.  Ruth, a first grade teacher, spent her summer vacations standing at the gate as a part of the vigil.  Military staff and employees at the Fort were instructed to refuse the protesters’ leaflets, and not to look at them.  Later, the Hartsough’s moved 3,000 miles west to Salem, Oregon.  One day in a bookstore there, Ruth was approached by a stranger.  “Were you in that vigil at Fort Detrick about ten years ago?”  “Yes,” she said.  “I just want you to know,” he said, “that I was working at Fort Detrick at that time, and because of you folks, I resigned my job.”

I reach often to my high shelf for Waging Peace.  To me, it is the Sermon on the Mount spoken  today.  Hartsough’s voice and words call out, and send us out: This is my faith---that we can be co-creators with God in helping to build a world of peace, justice and human dignity for all people.  We have all that we need to bring about transformation, and we are all critical to the struggle.

Charles Busch is a United Church of Christ minister, and founder of Peace Village, and Fields of Peace.  He works with the War Prevention Initiative to end war on our planet by 2030.