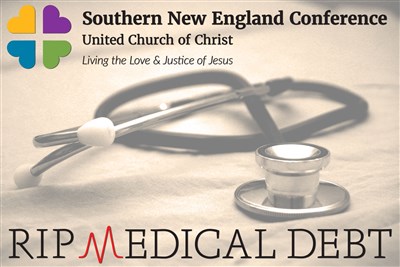 The Southern New England Conference United Church of Christ has launched its first big initiative: a drive to make a difference in the lives of those saddled by medical debt in the poorest cities in the region.

The hope is that 100% of churches will participate. Early contributors have included 16 of the 609 churches of the Conference, who have sent in $14,805. The drive will continue until April 17, the Friday after Easter.

In the launch letter, churches were asked to consider donating 1% of their church’s total income to the drive. Churches might consider contributing from mission budgets or unrestricted endowment funds, holding special offerings or holding fundraisers. Some churches have committed Easter offerings to the drive.

To amplify the effort, the Northeast Association in Massachusetts has pledged to match donations by churches in that Association, up to $25,000.

“The mission of the Northeast Association is to connect congregations, support pastors, and build covenantal relationships in the unity of Christ,” said Moderator the Rev. Alex Shea Will. “This felt like a timely and faithful way to build covenant between our Association congregations and the new Southern New England Conference.”

“We know that $25,000 is a lot of money,” he said.” And in a culture in which nine congregations close a day, it was tempting for us to live into the myth of scarcity and hold back. But, as a Board, we felt it was part of our responsibility to be bold in our generosity so that we might inspire confidence in congregations to do the same.”

The Conference’s drive is part of a national initiative launched by the United Church of Christ in Chicago in the fall. The Conference will work with RIP Medical Debt, a nonprofit organization that buys up and then forgives medical debt for pennies on the dollar. Working with RIP Medical Debt, churches in the Chicago area were able to erase $5.3 million in debt, and St. Louis area churches forgave $12.9 million.

Every $100 raised allows $10,000 in medical debt to be forgiven. This Conference initiative will be used to forgive debt in areas including Springfield, MA, Bridgeport and Hartford, CT, and Providence, RI.

Medical debt carries with it many challenges beyond financial burden. Needed health care services can be cut off for patients having problems paying their medical bills. Additionally, medical debt causes people to cut back on some of the most important necessities including food and clothing. Medical debt contributes to more than 60% of all bankruptcies.