Veradale United Church of Christ in Spokane Valley, Wash., is in the public spotlight this winter for opposing white supremacy and white nationalism. 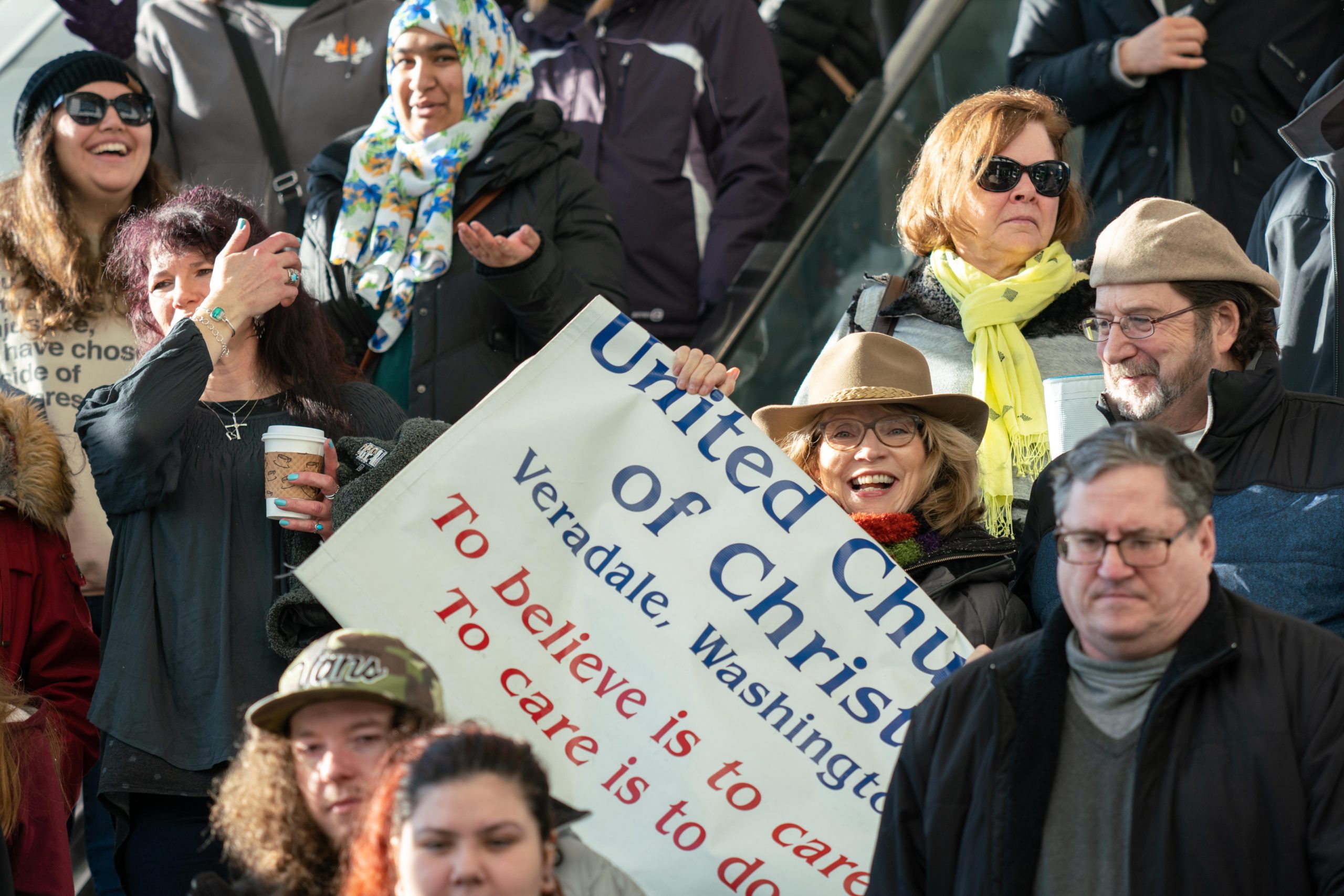 The congregation, numbering about 30 in worship each Sunday, recently drew the ire of the town’s mayor. Bothered by their faith-based social activism, he accused them and a progressive citizens’ group that meets at the church of being associated with a violent, leftist conspiracy.

Veradale’s pastor, the Rev. Genevieve Heywood, has publicly denied that allegation. What they have been doing, she said, is promoting a view of Christianity that differs from the “dominion” theology and white-supremacist views that have been documented for decades in eastern Washington and nearby northern Idaho – and that have taken on an especially public face in recent years.

Heywood and the community group that Veradale hosts have called for the resignation of Spokane Valley’s state representative. Rep. Matt Shea has been revealed as an author of a four-page “Biblical Basis for War,” which describes God as a “warrior” and details strategies for a “Holy Army.” As noted by a local newspaper, Shea’s document “makes a chilling prescription for enemies who flout ‘biblical law.’ It states, ‘If they do not yield – kill all males.'”

Shea was expelled in December from the Washington House Republican Caucus and faced calls to resign after a report accused him of domestic terrorism in connection with a 2016 militant takeover of a wildlife refuge in Oregon. Meantime, on Spokane Valley’s City Council, a majority of members that appointed Mayor Rod Higgins – a Shea ally – is now outnumbered by a more moderate faction who might not appoint him again.

How much Veradale’s witness influenced any of that is not clear. What is clear is that the congregation, founded in 1910, has been about the work of inclusive Christianity and public nonviolent witness for a long time – and intends to keep it up despite mayoral criticism and its own current financial difficulties.

Faith Leaders and Leaders of Conscience, whose meetings at Veradale draw people from several faith traditions as well concerned citizens with no religious affiliation, has held vigils outside Spokane Valley City Council meetings. It has given medals to former white supremacists and public officials who have exposed and criticized white nationalism.

It is just one of the groups organized by Pastor Gen, as Heywood is known. She also convened Families Against Bigotry after white-nationalist banners appeared at a local high school, responding to students who took part in a 2018 March for Our Lives walkout opposing gun violence. “Some moms said, ‘what can we do?'” Heywood recalled. “I said, ‘The church is open to you.'”

That sort of activity is what prompted the mayor’s accusations. Around Thanksgiving 2019, Higgins was under pressure over remarks he had made to a national journalist – while defending Shea – about the 1991 beating of Rodney King by Los Angeles police. Explaining those comments in an interview with Spokane’s KHQ-TV, Higgins mentioned someone who had renounced white supremacy and been honored by Faith Leaders and Leaders of Conscience.

“[He] is being held by the progressives out here at the United Church of Christ on Progress [Road] as being a man of truth,'” Higgins said. “…They’re always giving an award to somebody for doing something. But the progressives are a subset of Antifa. If you go online and look them up, you’ll see there’s quite a close association in there, and ultimately, they’re probably funded by George Soros.”

That’s just false, Heywood said in a televised response in December. Unlike the anti-fascist movement Antifa, Veradale is committed to nonviolence. And unlike organizations backed by the global philanthropist Soros, Veradale and the Leaders of Conscience group are entirely funded locally.

It’s not the first time Veradale has faced opposition. Long the most progressive church in its community, it regularly has a float in the local pride parade, participates in Martin Luther King Jr. Day events, takes action on environmental issues, and has even drawn protestors who dislike its Open and Affirming covenant. 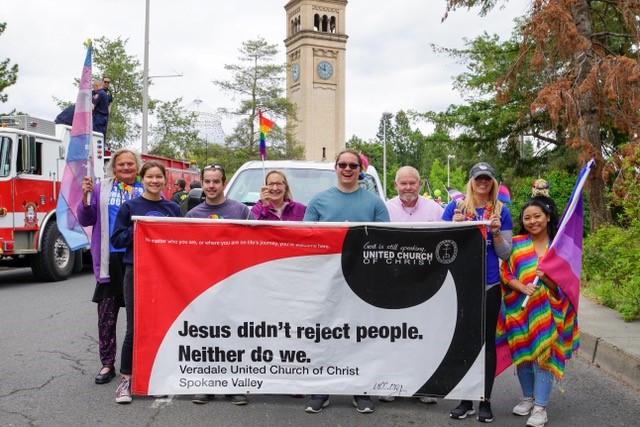 But the mayor’s accusations were a special cause for concern, both because they were misleading and because of the threat they implied, given his links to Shea, and Shea’s association with armed uprisings.

Member Jan Young, who counts 70 years at Veradale dating back to her childhood, called out the mayor in a December letter published in the Spokane Spokesman-Review. “Non-violence is the truth we stand by in seeking justice and resisting evil,” Young wrote. “Mayor Higgins’ false statements about VUCC open the door to violence directed toward our church. He must stop and apologize publicly.”

Veradale has, in fact, undertaken security measures that members never felt were needed in the past. Unlike a local megachurch that trains its members to use guns, they’re not arming themselves. “We’ve chosen not to be that kind of church,” Heywood said. But conscious of U.S. church shootings in recent years – and with war rhetoric in public use – Veradale became deliberate several months ago about entryway locks, sentries, alert systems and escape routes during worship. “I think we’re pretty well protected,” Heywood said.

It’s part of the reality of being a united-and-uniting, social-justice church in a region where “white power” thinking is more prominent than ever, Young said. “There has always been that undercurrent, but as of late, because of people in power, here and nationally, it’s risen to a new level,” she said.

That was tested, she said, during a face-to-face meeting at the church with Higgins and Vice Mayor Pam Healy. Heywood was accompanied by longtime Veradale member Don Young (Jan’s husband) and by a member of Families Against Bigotry. They met in the fall, before the mayor’s Thanksgiving TV appearance

“He was angry because I was speaking up at City Council meetings, and I should have met with him first,” Heywood said. “He came on the attack: ‘What was your goal?’ Why was I ‘picking on’ him? He didn’t listen well.” In the end, she and Young felt little had been accomplished.

Nonetheless, Veradale plans to persist in its public witness. Its current finances will not make that easier. The congregation benefited for decades from a trust fund. “The person who controls the trust fund decided that when he leaves this earth, he wanted the fund to go to a local youth organization,” Heywood said. “So it was taken from us. He gave us enough to cover about three years of what the trust fund used to cover. So our church knows that we now probably have about 14 more months before we run out of funding, because we spend more than we have” – even with church members handling all janitorial and yard work voluntarily.

‘Not going down without a fight‘

Even in the face of that news, Veradale’s lay leaders were clear that the church’s public witness must continue. “They decided, ‘We may die, but we’ll do it faithfully,'” Heywood said.

“Our financial situation has been dire, but that hasn’t at all dampened the flame of our efforts to push forward with what we believe in,” Jan Young said.

“We’re not going to go down without a fight,” Don Young said. “On the church council, it’s something we discussed. If we have only a few years to go, we’re not going to change what we do. We’re going to be that light shining and that beacon of hope to anyone who needs it.”