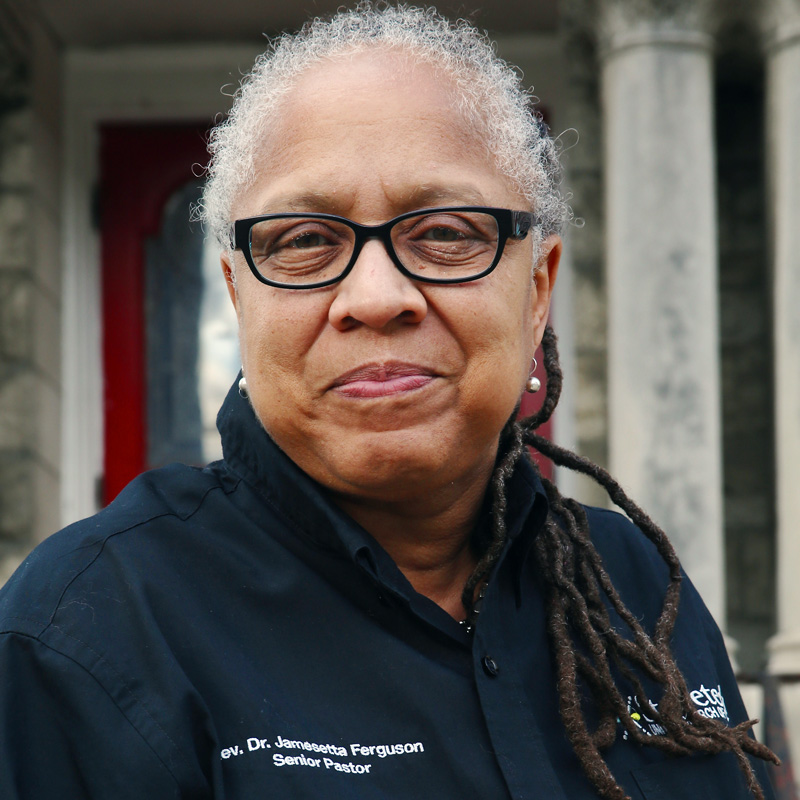 As a child from the housing projects across the street, the Rev. Jamesetta Ferguson walked past St. Peter’s Evangelical United Church of Christ all the time. She never went inside.

“That church was invisible to us,” Ferguson remembered. “We were never invited in.”

Now she is its senior pastor. The projects have been demolished. And the church grounds are the site of a new kind of project – for offices, businesses, social programs and more. Ferguson and others see it as a bearer of hope for the long-neglected Russell neighborhood of Louisville, Ky.

Heavy equipment is now at work on St. Peter’s former parking lot, laying groundwork for a $7 million, two-story development called the Village at West Jefferson. It is also called MOLO Village, named with the word for “welcome” in Xhosa, a southern African language. The 30,000-square-foot building is expected to open in early 2021. It will be home to a range of enterprises, from restaurants to nonprofit programs for young and old.

It’s a story of a church deeply invested in its neighborhood, how it reacted to crises and how it found cooperation and support – financial and otherwise – from national UCC ministries, local government and civic leaders.

The story started when Ferguson returned to Louisville as an adult and saw St. Peter’s with new eyes. As a child, she had lived across the street with her aunt in the 31-acre Beecher Terrace housing development. Her own mother, divorced and single, was working four jobs. When her mother remarried, they moved to other places, including Ohio and Lexington, Ky.

Called to ministry as an adult – first in the Christian Methodist Episcopal Church, then as pastor of a nondenominational congregation – Ferguson eventually enrolled at Louisville Presbyterian Theological Seminary. Newly alert to all things UCC, her recent denomination of choice, she was on her way to an urban internship one day when she noticed for the first time what the sign in front of the church on her old street said: “St. Peter’s Evangelical Church, a congregation of the United Church of Christ.”

Intrigued, she arranged to switch her internship to St. Peter’s. The congregation consisted of about 12 older German Americans. “They were meeting in the nursery because there were so few of them,” Ferguson said. Their plan was to close as a congregation and donate the building to a local nonprofit.

Ferguson saw other possibilities, and after her internship, they called her as pastor in 2006. “They took a risk,” she said – and they lost one member “who didn’t want to worship with someone who looked like me.” The rest – they’re now almost all deceased – supported her. “I talked about church revitalization and becoming a multiracial church,” she said. “They wanted to believe me, but I don’t think they really believed that it could happen.” But the congregation slowly began to grow, with new members from its predominantly African American neighborhood.

‘We were at a point of desperation’

There were challenges ahead, however, and these shaped the road to MOLO.

First, mold and lead were found in the historic church, built in 1895. Structural work was needed, too. “We had an architect give us a quote,” Ferguson said. “It was going to take over a million dollars to renovate. That’s what prompted me to submit an application to the Church Building and Loan Fund. I knew we wouldn’t qualify, but we were at a point of desperation.” 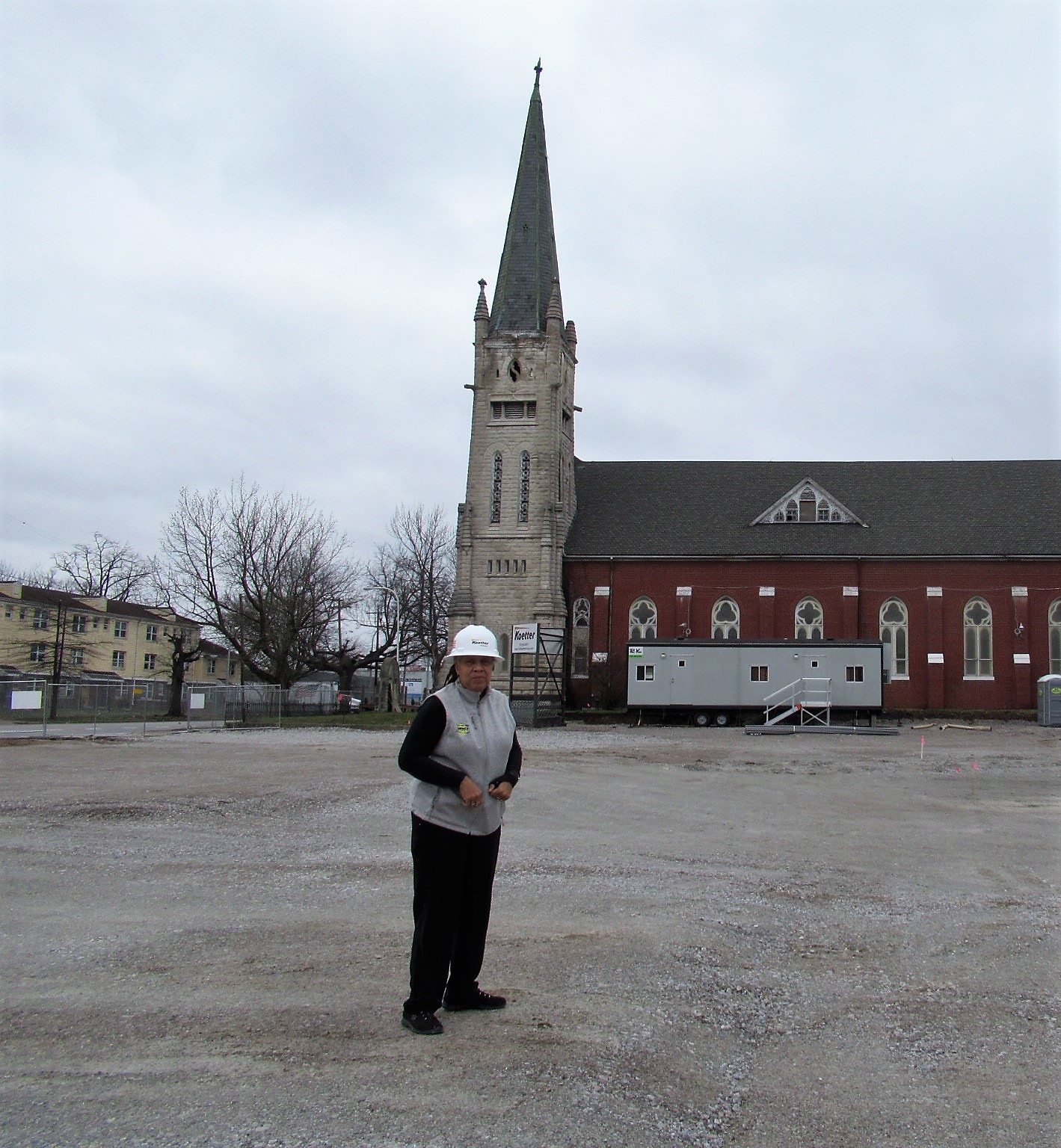 The result was a meeting with the executive director of that UCC fund, the Rev. Patrick Duggan. “We began to have a conversation about what we could do to make our situation better,” Ferguson said. “We were basically a new church start.”

Then a series of killings took place in the city, one of them at Beecher Terrace. The church found itself cooperating with civic leaders as they brought focus and resources to the neighborhood. Among them were the Louisville Metro Housing Authority, which operated Beecher, and the Leadership Louisville Center, where Ferguson was part of a Bingham Fellows team assigned to focus on the neighborhood.

What emerged was a plan to demolish Beecher and replace it with 640 new units. The key investment came in December 2016, in the form of a $30 million grant to the city from the U.S. Department of Housing and Urban Development. That’s when the church decided to make its mission move. Instead of focusing on the historic building, it would create a new space for businesses and social programming.

“I believe God put us in the right place at the right time to create this wonderful project,” Ferguson said.

‘Most unusual project’ ever

Under her leadership, and with guidance and support from Duggan, CBLF, the UCC Cornerstone Fund and local allies, funds were raised by creating a free-standing nonprofit organization, Molo Village Community Development Corporation. Its mission: “to transform, empower and renew the lives of those we serve through education, community service, advocacy and healthy living.”

It is “easily the most unusual project in the 167-year history of the Fund,” Duggan said. “Unlike most projects financed by CB&LF, in which the church makes a down payment and the Fund provides a mortgage or construction loan, this project required nine sources of financing.” They are: 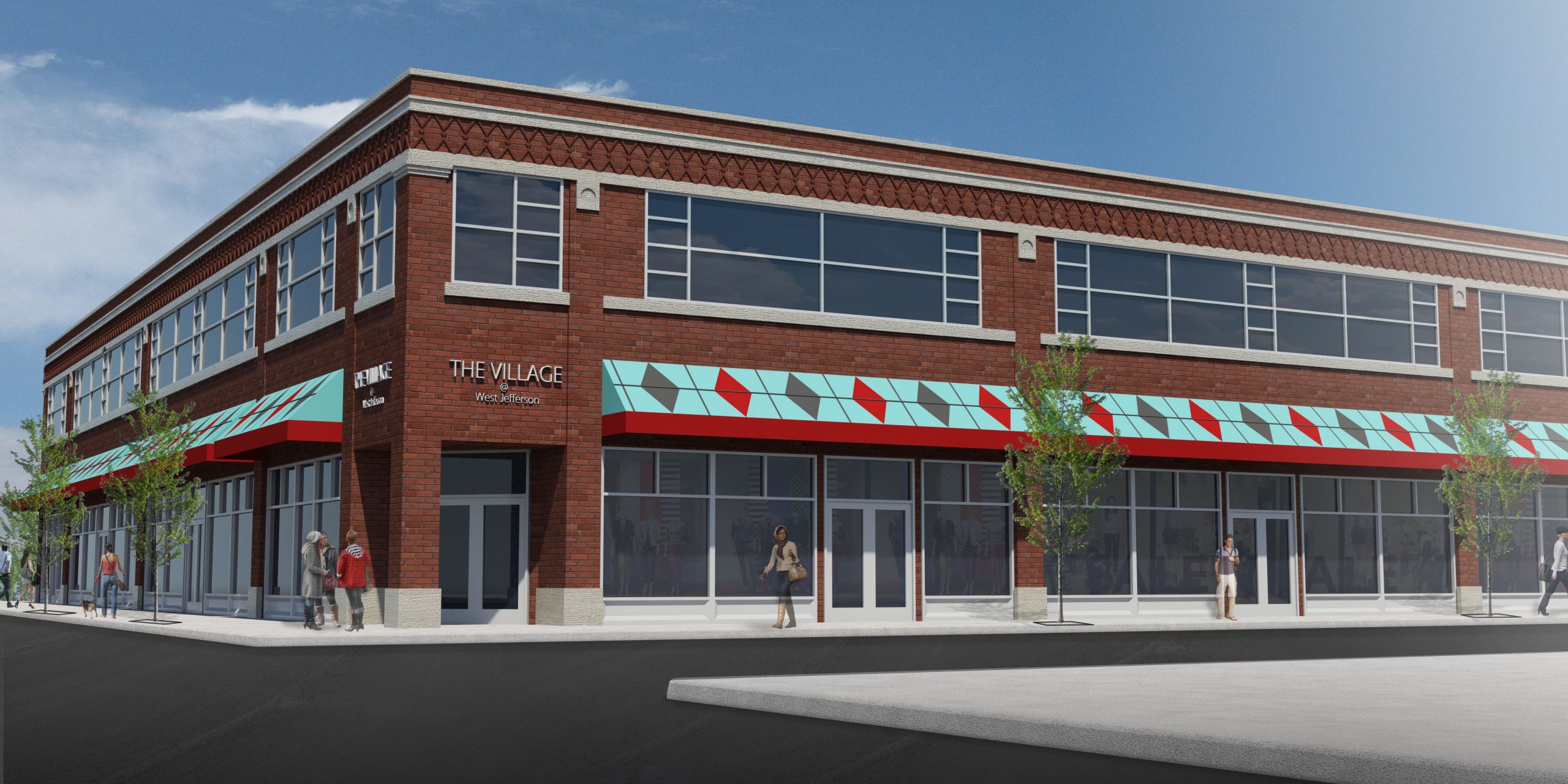 This approach could become an example for other urban congregations, said Jeanine Colozza, Cornerstone’s vice president and chief lending officer. “While a CDC model is not a common financial model, it is becoming more common as churches – within the United Church of Christ, and others – attempt to find more creative ways to utilize their real estate and expand their ministry to support the local community,” she said. “We have loaned to at least one other CDC in the past few years and expect to see this become an increasing trend in the years ahead.”

‘Re-envisioning, again, how to do ministry’

For St. Peter’s, the MOLO project and the new housing project across the street have meant both opportunity and change.

For one thing, the congregation is smaller – for now – because of the 2018 demolition of Beecher Terrace. “We have 250 or 260 people on the rolls, but many of them are now displaced,” Ferguson said. “Many used to just walk across the street to come to church. Now they live elsewhere and have no transportation.”

Another is that, with lead and structural issues still unresolved, St. Peter’s has moved its worship and programs out of the historic building. But its work hasn’t slowed down with its move to a 5,000-square-foot space in a strip mall down the street. Counting worship and the church’s recovery, nutrition, prisoner-reentry and food-pantry programs, “right now we have 600 or 700 people a week go through our doors,” Ferguson said. Worshipers at a Saturday service – timed with the food pantry – and on Sunday morning typically total 100 to 150.

And that all could grow. Thanks to legal provisions that St. Peter’s helped to secure for the Beecher project, all displaced residents can return if they want to. Its first phase will open this fall, with 177 of what will eventually total 620 mixed-rental units, plus 20 for ownership. “So we’re in the process now of re-envisioning again how we’re going to do ministry in this new community.”

Vision: return of hope and prosperity

MOLO Village will be at the core of that. In addition to offering the kinds of programming St. Peter’s already provides, some of its space will be leased to the housing authority, which will also offer services to low-income families. Eight other local businesses, some of them minority and women-owned, will occupy ground-floor retail. They will be among the first retail establishments in the West Jefferson neighborhood in over 50 years, and will include a coffee shop and two eateries.

Somewhere on the horizon will be another phase to renovate the historic church.

Ferguson envisions a return of hope and prosperity to “a community that has had disinvestment for almost 30 years.” It once was different, she said.

“As a child everything looks great many times, but I do remember there was a lot of opportunity, stores, positive activity in community,” she said. “It was a thriving community, filled with a lot of hope. That is what I believe what God wants us to become again – filled with a lot of hope and pride in who we are as a community. We as a church should be playing a vital role in offering that hope for people. It is important for us not just to talk about it but to be about it. That is what I hope this project will do – bring some of that economic investment back into the community.” 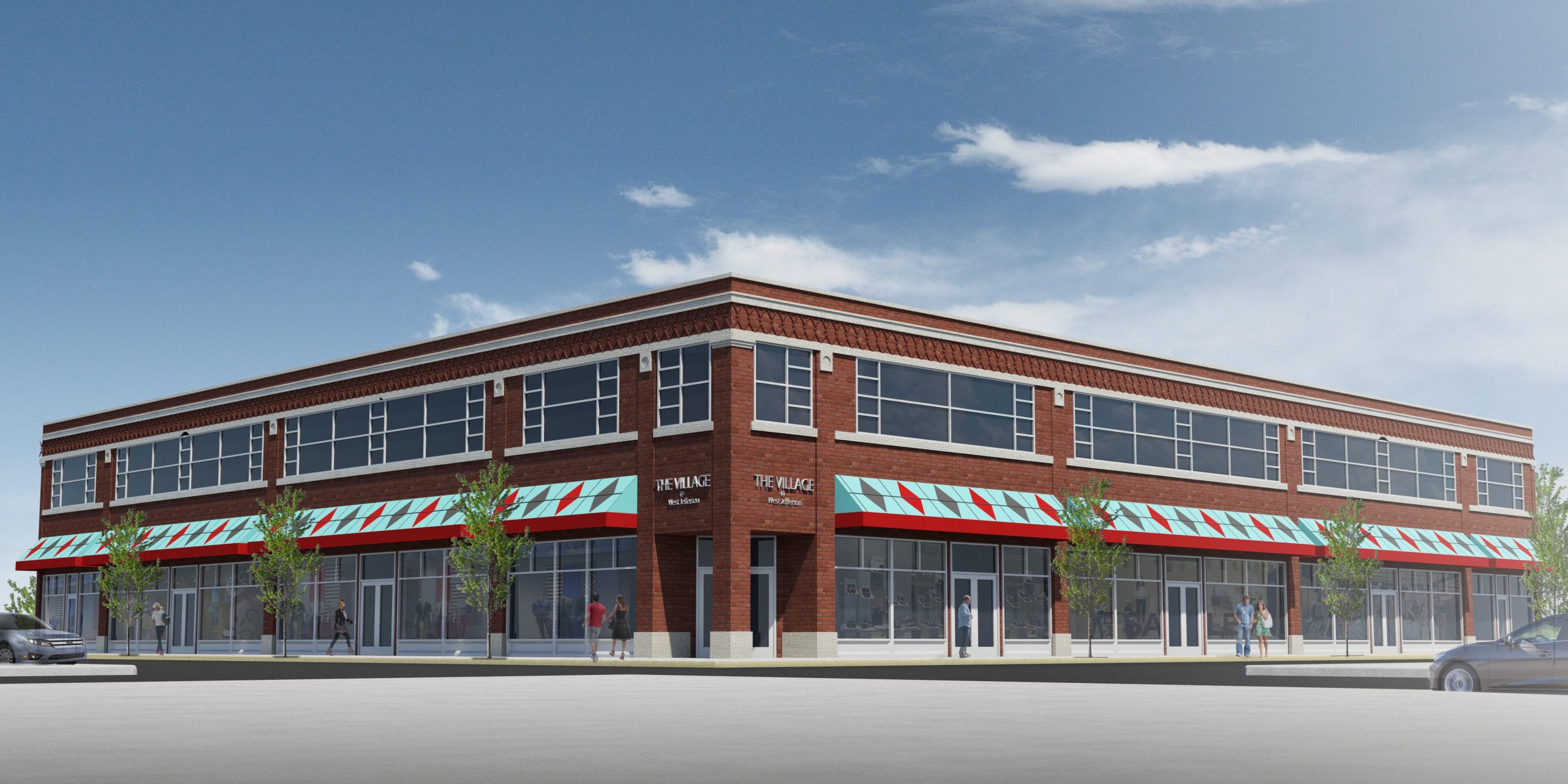