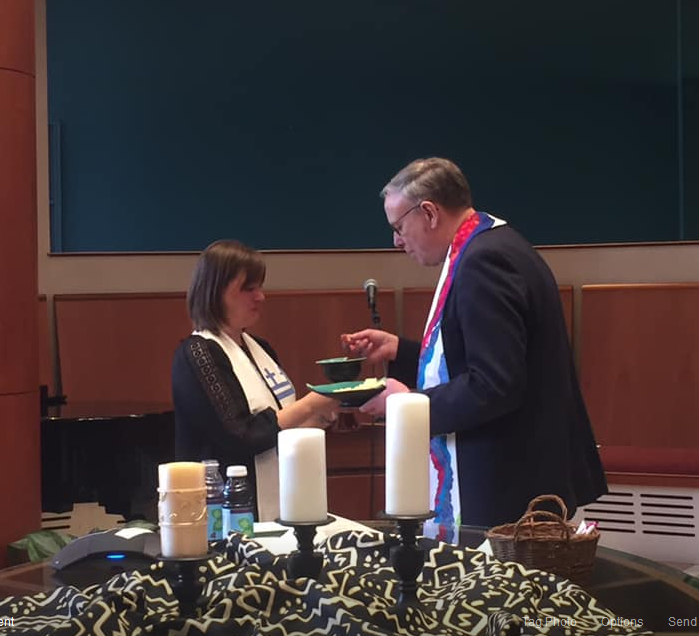 Come my friends and gather at the table. The National Officers of the United Church of Christ joined Local Church Ministries’ MESA (Ministerial Excellence, Support and Authorization) Team in offering a sacramental sendoff for the Rev. Holly MillerShank, who has left her position as MESA team leader to continue her ministry in the local church.

National staff and a number of Conference Ministers also participated in the worship service of Word and Sacrament in the Amistad Chapel on Monday, February 4, in celebration of Millershank’s contributions to the wider church.

MESA, now a Justice and Local Church Ministries team, was conceived and built by MillerShank. Called to lead LCM’s Parish Life and Leadership in fall of 2010, MillerShank proposed re-imagining that ministry as MESA to the National Officers in 2012, and spent the next year gathering a staff.

MillerShank also transformed the Search and Call gathering to AM 21 in 2012, revised the search and call system to a Ministerial Profile and Local Church Profile system, and led the revision and recent re-release of the UCC Manual on Ministry.

The Rev. Traci Blackmon, associate general minister of Justice and Local Church Ministries led the service of farewell, which recognized the ending of MillerShank’s authorized ministry, released her from her role with the National Church, and encouraged her new ministry as Interim Minister of Olmsted Community Church, in Olmsted Falls, Ohio.

Speaking for the group, pledging to accompany her on the next part of her ministry journey, Moos said, “This is the turning of a page, not the closing of a book. Thank you Holly for setting a remarkable table.”