Religious pro-choice stance: not new to UCC, but urgent as ever 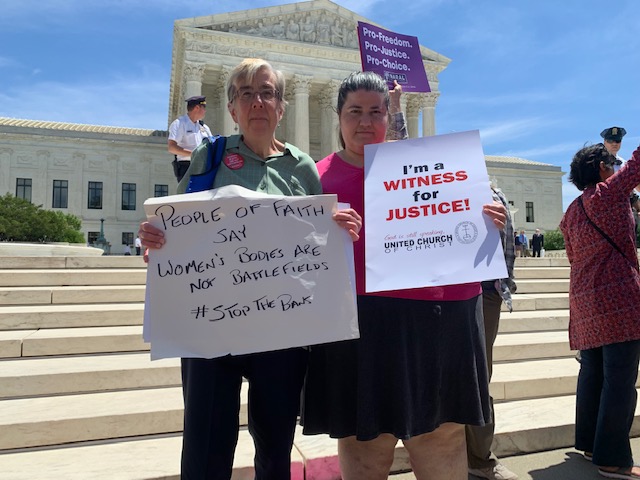 With abortion laws high on the public agenda, United Church of Christ leaders and ministers are reminding the world that many Christians have long supported reproductive justice and choice for women. They are speaking out on social media and at events like Stop the Bans rallies held May 21 in Washington, D.C., and in states that have passed or are considering new laws restricting or eliminating a woman’s right to an abortion.

They continue a tradition of more than 50 years of public UCC support for the position that women are entitled to make individual decisions about their own reproductive lives.

“The issue is control over women’s bodies and the erosion of their self-determination and autonomy,” said Sandy Sorensen, director of the UCC’s Capitol Hill office, before attending a rally outside the U.S. Supreme Court. “We will continue to affirm the God-given moral agency and autonomy of women. We won’t go back.”

Adding to the current urgency are a shifting balance of power on the Supreme Court — possibly threatening women’s rights under the 1973 Roe v. Wade decision — and recent federal policy changes made under President Donald Trump.

“Under the current Administration, the attacks on reproductive health care access have largely happened under the radar screen of public attention,” Sorensen said. “Health and Human Services regulations have been changed by executive order to allow women to be denied access to reproductive care. The fast-tracking of conservative judicial nominations without thorough vetting has been another challenge. We have pushed back against efforts by the Administration to cut funding to international family planning and reproductive health care organizations that simply provide referrals to abortion services. This despite the fact that when women have access to the full range of reproductive health care, they are empowered, and when women are empowered families and communities thrive.” 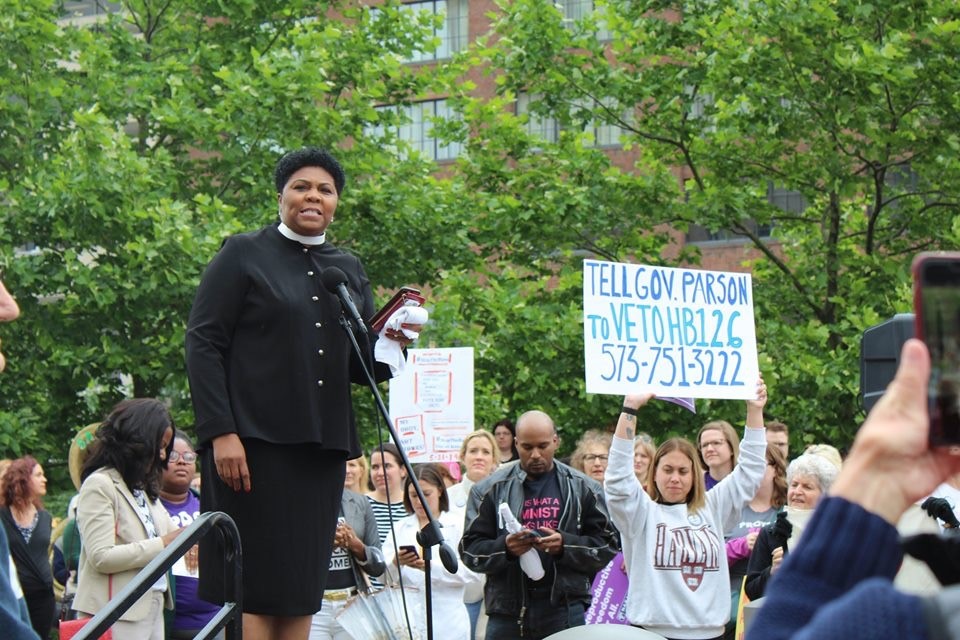 In St. Louis, a Stop the Bans rally called for a gubernatorial veto of Missouri House Bill 126, which would ban abortions as early as the eighth week of pregnancy, before many people even know they are pregnant. Speaking at the May 21 rally, the Rev. Traci Blackmon, UCC associate general minister for Justice and Local Church Ministries, said: “The United Church of Christ … has spoken out for bodily integrity and every woman’s right to choose even before Roe v. Wade. We stand with women as the inherent beneficiaries of personal autonomy and self-determination over our own bodies. We stand on the foundation of our sacred text and in the shadow of the Universal Declaration of Human Rights and declare that the violation of a woman’s right to choose is an act of gender-based violence. And we will not be silent.”

Blackmon, who is also a registered nurse and a past Planned Parenthood board member, said Missouri “will more eagerly outlaw a woman’s right to choose than outlaw capital punishment.”

“We live in a state that will more readily ban a woman’s options to safe abortion than responsibly ban assault weapons and legislate reasonable gun control laws,” she said. “We live in a state that would rather criminalize doctors than champion a living wage for the families they claim to care so much about. Let me be clear. This fight is not about life. It is about control. This assault on women will not stop abortion. But it will prevent safe access.”

Blackmon had elaborated on that theme in a May 14 Facebook post. She said oppressive laws never stop people with financial resources. “Those who want abortions will still have means to get them,” Blackmon wrote. “They will travel to states that have not done what Alabama has now done. They will go to private physicians who will code abortions as medical [procedures] and perform them in their exam rooms. They will get what they choose.”

“If we want to decrease abortions, let’s start by increasing sex education,” Blackmon wrote. “Let’s start by covering birth control. Let’s start by caring as much about services for children after birth.”

In Ohio, UCC ministers are speaking out against a “heartbeat bill” that they say would ban as many as 90 percent of abortions. “As a Christian pastor, I speak out against the tightening restrictions on abortion because of my faith,” wrote the Rev. Chris Davies in a commentary on the UCC website. She leads the UCC’s national Faith Education, Innovation and Formation team and serves on the board of Preterm, a nonprofit Cleveland-based provider of sexual health care. “Without access to comprehensive healthcare, we are not affirming the full humanity of people already marginalized among us. Without access to abortion, we send a message that only those with money and power can get the procedures that they need, whether legally or illegally.”

Preterm, the Ohio chapter of the American Civil Liberties Union and others agencies are suing to stop the law, which the legislature has already passed. The Rev. J. Bennett Guess, who leads ACLU Ohio, said he sees complete continuity between that work and his previous ministries.

“Throughout my nearly 30 years in ministry, access to full-options reproductive health care has been a central issue for me personally, and everywhere I have traveled across my career as a UCC pastor, national staffer and officer, and now ACLU executive, I have seen first-hand how UCC people are at the forefront of advocating for birth control access, abortion rights, and lifelong comprehensive sexuality education,” Guess said. “As a Christian denomination long committed to gender equality, our living out that faith stance necessitates an unequivocal pro-choice position, firmly insisting that women must have autonomy over their own bodies and agency over all decisions that directly impact their lives and futures.

“I’ve been one of the most ardent proponents of gender-inclusive God-language, because the adage ‘if God is male, then male is God’ is being brazenly made manifest in state legislatures right now across our land. Faith communities should play a critical role in challenging that longstanding misogyny, which is rooted in male supremacy and oppressive theology.” 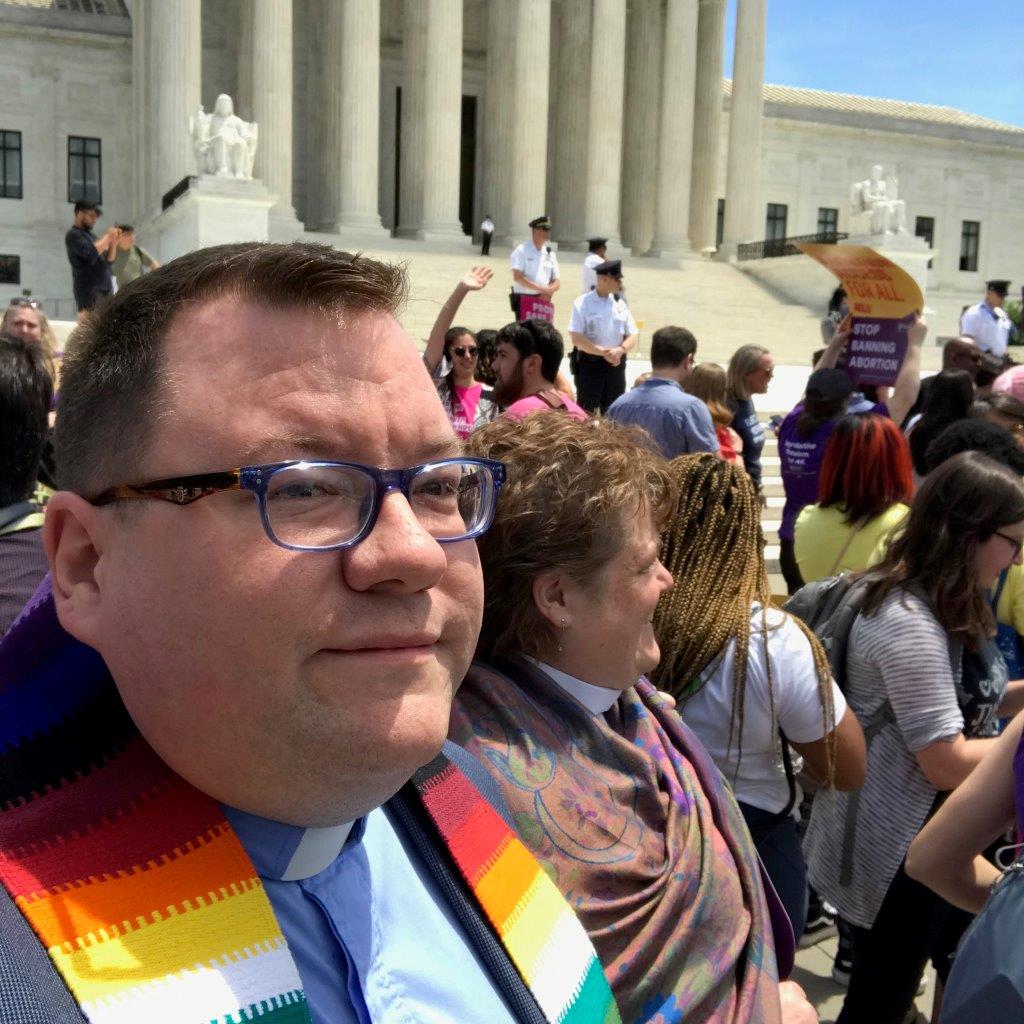 “Reproductive rights are under attack in our nation in an unprecedented way,” said the Rev. Terry D. Williams, pastor of Orchard Hill UCC, Chillicothe, Ohio, while attending the May 21 rally in D.C. “I stand with the millions of people across our nation today who are calling on leaders to #StopTheBans. As people of faith, we cannot stay silent while our basic freedoms of choice and healthcare are attacked. We can and we must speak up against these immoral bans on abortion care services. I trust women to make choice that impact their bodies—that’s my religious ethic.”

The UCC’s tradition of supporting women’s agency over their reproductive lives, including the right to choose abortion, is at least as old as a 1971 General Synod vote on “freedom of choice.” Even earlier, in 1967, the Rev. Howard Moody of UCC-related Judson Memorial Church in New York City had been instrumental in forming the Clergy Consultation Service on Abortion. Its successor, the Religious Coalition for Reproductive Choice, was founded by diverse groups, including the UCC’s national ministries. The Rev. Linda Jaramillo of Portland, Ore., a retired national officer of the UCC, chairs RCRC’s current Board, which also includes the Rev. John Selders, pastor of Amistad UCC, Hartford, Conn.