The virus infecting the killers of Ahmaud Arbery, Breonna Taylor, George Floyd and other Black people in America is much older than COVID-19. It will stop killing people only if society, the church and especially white people focus relentlessly on a cure, over the long haul, using resources that are already available.

Naming the effects of that virus – racism – and how the church can respond were central themes of "The Cross and the Lynching Tree: A Requiem for Ahmaud Arbery," a May 31 United Church of Christ online panel discussion. It was recorded and can be viewed on the UCC YouTube channel.

The urgency of the Sunday-evening conversation was further heightened by the events of the week leading up to it. Thousands of nonviolent demonstrators filled the streets of several U.S. cities, responding to Floyd's death at the hands of Minneapolis police. Curfews were in place in several of those cities, due to property damage by small numbers of people who broke away from the nonviolent protests.

The metaphor of racism as a virus was presented in a 22-minute cinematic sermon by the Rev. Otis Moss III, senior pastor of Chicago's Trinity UCC. It set the tone for responses from four panelists – and, via a chat feature, from 4,400 registered viewers on the webinar platform Zoom. In the video, which premiered May 17 in Trinity's online worship and has been viewed more than 80,000 times on YouTube, Moss described Ahmaud Arbery's Feb. 23 death while jogging in Brunswick, Ga.:

"He encountered two men who tested positive for Confederate COVID-1619," Moss said, incorporating the year when enslaved Africans arrived in English-occupied North America. "The disease is often asymptomatic and spreads through human contact, rhetoric, ignorance and family relationship. Ahmaud Arbery, a man of potential, was attacked and killed by men infected with America’s most common and potent viral agent. This virus alters the eyesight of the attacker, weaponizing the body, giving the illusion of blackness as a threat, making melanin appear as a weapon and any movement as potential danger. It took 10 weeks for an arrest to be made due to the potency of this viral agent." 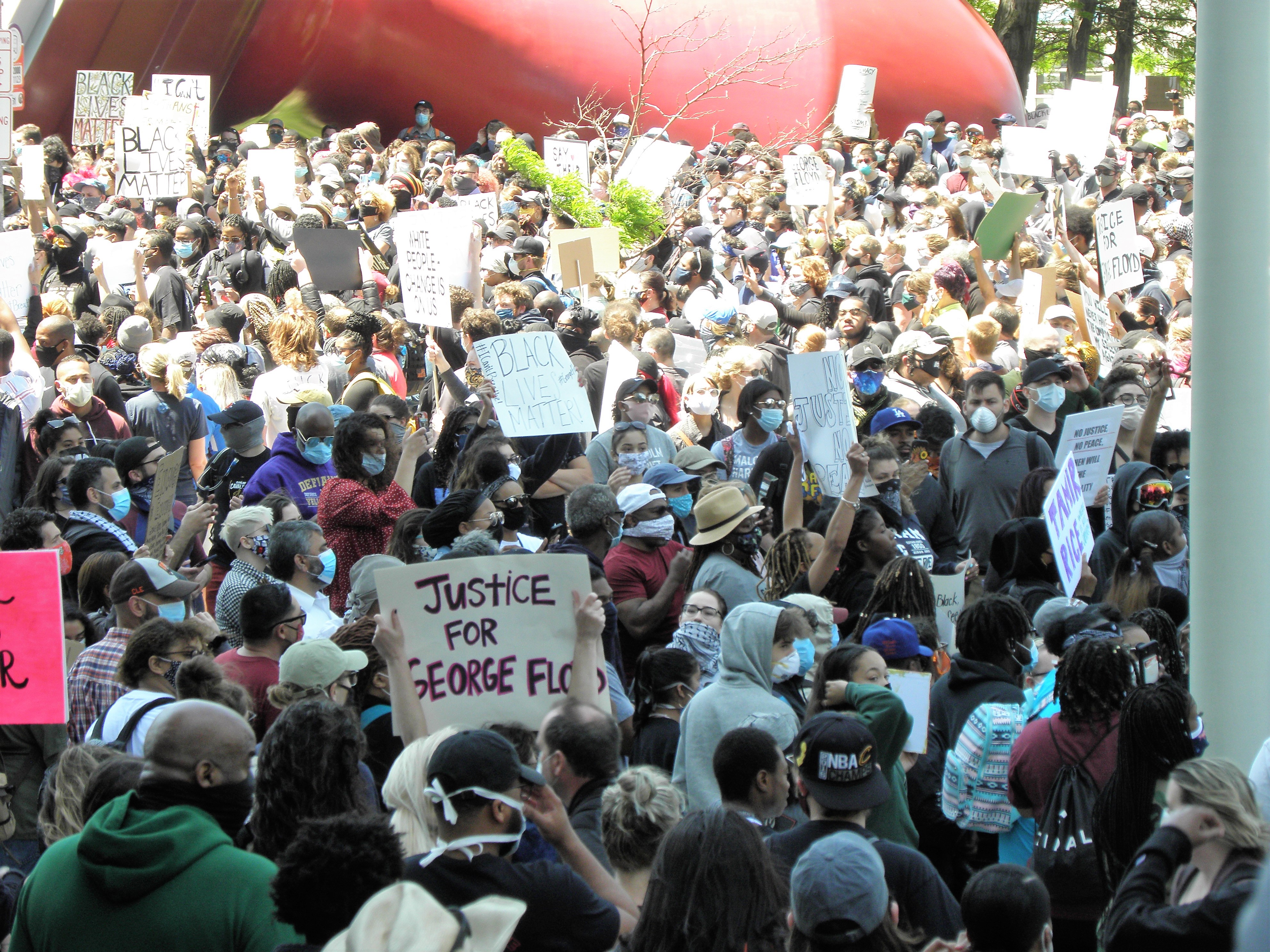 "Amens" from webinar viewers filled Zoom's chat feature as the video connected Arbery's killing to the history of oppression and exploitation of African Americans – and to racism’s deadly viral pattern of death. "Another life taken," Moss said in the video. "Another public lynching. Another news story. Another act of recorded Black death. It is disturbing our nation has become comfortable with weekly broadcasts of Black bodies falling to the ground."

The panel's moderator, the Rev. Velda Love, minister for racial justice with UCC Justice and Local Church Ministries, picked up the theme as she invited panelists to respond. "Racism is a virus that affects the spirit," Love said. "… We're facing two lethal pandemics. One is COVID-19, which is devastating communities, but particularly African American communities. The other is a 500-year-old virus affecting the souls of America, and it is racism."

She noted the difference between how police responded to the week's multiracial protests – officers often donned riot gear and used tear gas – and how they handled recent demonstrations by white people calling for states to ease pandemic restrictions. "We've seen photos and stories where angry white men and white women scream and shout, and they have their weapons in full view," Love said. "Police officers are standing, like statues, not responding but respecting. They don't attack, they don't arrest, they don't pepper-spray, they don't beat down or threaten these individuals."

That prompted panelists to name big, systemic, generational ills, all connected to racism.

"The system was set up like this," said Linda Sarsour of Brooklyn, N.Y., who heads MPower Change and was co-chair of national Women's March in 2017 and 2019. "Even when we talk about policing in America, understand that policing started from slave catchers," she said, in a reference to studies by historians. "So when you understand that, … and understand how they disproportionately impact black people right now in America, it all makes sense." It's one example, she said, of a system so deeply infected that it must be totally changed. "Start over," she said. "We cannot keep talking about reform. … If something was set up to do what it does to Black people, how can you reform it?"

For much of America’s history, democracy has not been real for African Americans, said the Rev. Naomi Washington-Leapheart, a UCC minister who is director of Faith-Based and Interfaith Affairs for the City of Philadelphia. "It's a lie that America was ever a democracy," she said. "…What is going on now is a reflection that the lie is crumbling. People are saying, can't you see? This was never a safe place for us. This was never a land of the free and the home of the brave. We never had equity in government."

"We live in a capitalist democracy that is crushing us, and we can't talk about democracy without capitalism or the other way around," said the Rev. Julian DeShazier, senior pastor of Chicago's University Church. "To talk about racism in the same way, we have to keep these words and these ideas at the forefront. People's hearts are broken right now and they are wondering, both from COVID and from this situation, how do we get back to normal? There is no normal. It's an opportunity for us to move forward in a new way."

'Software that must be obliterated'

The way forward, said Moss – who was also on the panel – will involve understanding the "algorithm of racism." "There is a particular software that operates in our consciousness that must be obliterated," Moss said. "Part of that is coming to grips, not just with racism, but … with whiteness that is connected to it. … The whole concept of whiteness was designed in relationship to blackness. … We have to deconstruct this idea, which is very difficult. … There is an idolatry around these ideas. … We’ve got to deal with that."

Panelists invited white people to take on that challenge.

First, as for identifying new American systems that can replace existing ones, "I think that folks need to be patient" with people of color, Sarsour said. "We have been too busy fighting the oppression to breathe and imagine what the future's going to look like. Right now the focus is on dismantling the current systems that are oppressing us."

Second, Sarsour said, white people can help by checking their agendas as allies. Showing up for protests is fine, "but what requires courage is to go back to talk to your grandfather, to your uncle, to your brother, to your cousin, to your mama, to your grandma. That is where the real work happens. … Do the work in your families. Because when we start dismantling that type of racism, with those that we love the most, this is how we’re going to be able to start imagining a future that includes all of us."

"It really is about white people doing their own work, and not leaving it on the desks or the backs of Black people or other people of color," Love said. "The question that I always ask is, 'When did you become white? What is your family's legacy and history? Who were they before they got on ships that came to North America? Can you speak to that before you call yourself white? Because 'white' is a construction that was designed to keep black people oppressed."

"I can't tell you how many texts I've received from white allies who say, 'Oh, I'm thinking about you, I love you, I just want you to know, I've got your back,'" DeShazier said. "Keep that same energy when the cameras have gone away and nobody's talking about it anymore. … I don't want this to just be another moment that stokes our emotions, that traumatizes us again, and then we don't move forward and figure out a way to be the church in a deeper way."

Several resources were mentioned during the course of the webinar that can help white people and others move forward, including the UCC’s Sacred Conversations to End Racism program. Issue-specific resources included tips to "know your rights at demonstrations and protests," "demand an end to Stand Your Ground laws" and "protect voting rights within your state."

"Each of the panelists expressed their collective pain and inability to breathe because of the recent acts of racist, lynching violence against black people across the nation," Love said after the webinar. "What remains clear is to press the movement to end myths of whiteness and white supremacist thinking within the Christian Church. The Christian Church must change the narrative regarding the myth of superiority of European descended people. Together we must protest when black bodies are lynched with knees, bullets and other forms of brutality. Join the movement to stand together and support #BlackLivesMatter." 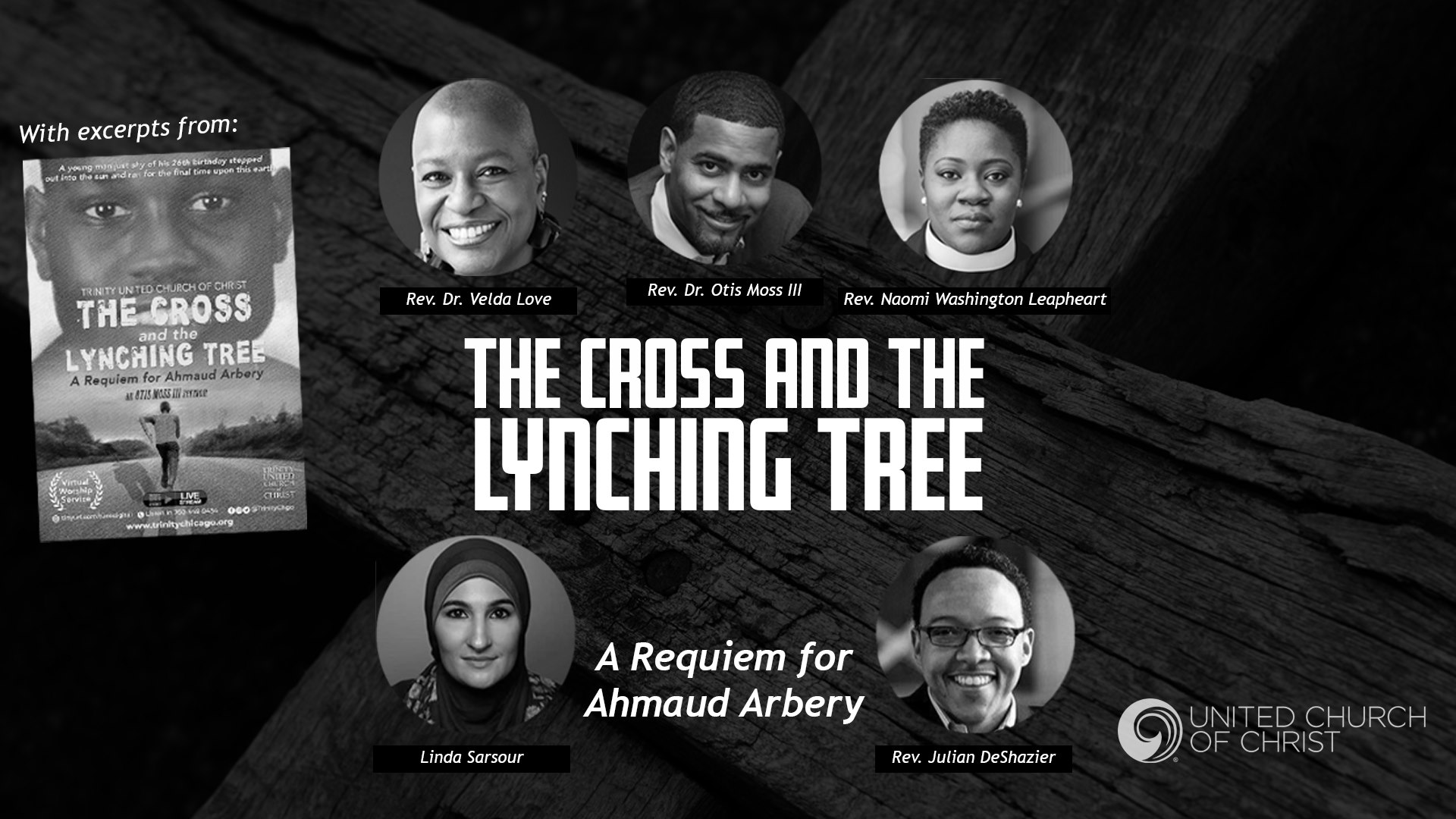