Every two years the General Synod of the United Church of Christ, our denomination's church-wide, democratic, deliberative body, meets to discern resolutions of witness, church structure, and function. These resolutions help to guide the work of our churches and our national staff.

Throughout our history the social policy statements of our General Synod trace an outstanding record of courageous vision across the decades. General Synod 30, which took place in June, was no different.

Here we’ve taken some time to briefly recap the newly passed resolutions that will guide our justice and advocacy work in the months and years to come. You can also view the complete list of resolutions, which will be officially finalized when our UCC Board of Directors meets in October.

Delegates voting at the 30th General Synod in Cleveland.

Dismantling Discriminatory Systems of Mass Incarceration in the United States

A Resolution of Witness [PDF]
Reaffirming its commitment to restorative justice, improving the criminal justice systems of state and federal governments, and recognizing that the privatization of the prison industrial complex has promoted and sustained the practice of mass incarceration, the General Synod adopted a Resolution to Dismantle Discriminatory Systems of Mass Incarceration. The resolutions calls on the bodies of the UCC to build our organizational capacity to address this injustice through national public policy advocacy and by: 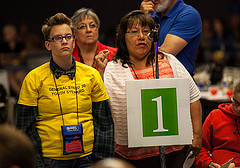 A Resolution of Witness [PDF]
This 2015 resolution calls upon the Washington NFL team to cease using the racially demeaning team name, its associated mascot, and its affiliated imagery.  Actions include calling for a UCC boycott of all Washington NFL games and merchandise unless and until the team’s name and logo changes, urging individual churches and members of the UCC to communicate their concerns to both the Washington team and the NFL. The resolution demonstrates the UCC’s progressive leadership on social issues by participating in the vanguard of a burgeoning national movement to end a significant symbol of racial discrimination in our nation’s capital.

A Resolution of Witness [PDF]
General Synod 29 delegates passed two related environmental resolutions: to divest from or engage in shareholder activism with fossil fuel companies, and to strive to become carbon-neutral congregations. At General Synod 30, delegates took the next step: a complete transition off of fossil fuels by 2040. Each conference is encouraged to develop a task force to assist congregations by listening to concerns, educating, organizing, and reporting on environmental justice issues. UCC members are encouraged to advocate with elected officials to help finance the transition to renewable forms of energy, and to ban fracking of oil and gas. 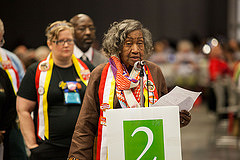 A Resolution of Witness [PDF]
This resolution calls for divestment from companies profiting from the occupation and boycotting companies that operate in illegal Israeli settlements. We know from our Palestinian Christian partners that the situation on the ground is worsening every day, with settlement expansion and other means of control, and that for every day there is no peace with justice, the conditions for those living under occupation actually worsen.  The resolution calls for study of the Kairos Palestine document (2009) as well.

The UCC’s resolution strengthens our voice in the debate, and seeks to help bring an end to the occupation, and support efforts to bring a just peace, through non-violent means. An additional summary guide of 'What Synod Said, and What It Didn’t', to understand and interpret the actions of the 30th General Synod, can be found here.

A Call for Peace, Justice and Reunification in the Korean Peninsula

A Resolution of Witness [PDF]
This resolution recognizes 2015 as the 70th anniversary of the liberation of Korea from Japanese occupation, and commits the UCC, in response to the 10th Assembly of the World Council of Churches, to pursue a lasting and sustainable peace with justice that will reunify and reconcile the people of Korea.

The resolution calls the US and regional powers to turn away from policies of confrontation and back to dialogue and engagement, which would include, after more than 6 decades, replacing the 1953 Korean War Armistice Agreement with a formal Peace Treaty, and taking steps to reunite the thousands of families that remain separated all these years after the war.

A Resolution of Witness [PDF]
For many years the United Church of Christ has advocated for the elimination of racism, the real driving force behind the New Jim Crow. The General Synod adopted this resolution to rearticulate its vision of, and commitment to, the common good concerning the New Jim Crow, which describes the disenfranchisement, marginalization, and re-subjugation of African Americans resulting in the creation of a permanent caste of second-class citizens.  The intention of this resolution is to mobilize conferences and members to: 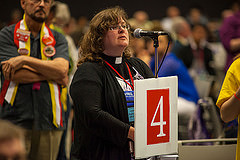 A Prudential Resolution [PDF]
In an effort to energize UCC congregations to support mentally ill people in their midst, the 2015 General Synod overwhelmingly adopted a resolution to develop a network of churches that are welcoming, inclusive, supportive and engaged (WISE) for mental health. Building on General Synod action in 1995, the resolution encourages congregations to adopt WISE covenants, with support from the Mental Health Network, which will advocate for all persons with mental illness who are falling through the fraying safety net.

A Resolution of Witness [PDF]
This resolution lifts concern for space debris, especially in low Earth orbit. Orbiting at 17,500mph, even debris the size of a marble can disable or destroy a satellite. There are 500,000 objects a centimeter or larger in size and 23,000 objects over 10 centimeters across. Justice and Witness Ministries will develop or recommend educational resources on this topic for congregations and communicate with global interfaith partners to collaborate on this issue. UCC members can urge lawmakers to fund NASA adequately to clean up space debris and support the US and other nations to promote responsible behavior in space.

Reaffirming Our Commitment To Full Equality for LGBT Persons 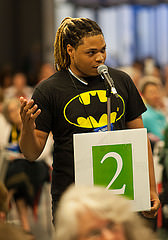 A Resolution of Witness [PDF]
Submitted by the UCC Open and Affirming Coalition, this resolution comes in response to developments over the past months to enact legislation that exempts individuals and private businesses from non-discrimination statutes based on religious conscience.  The resolution re-affirms religious liberty and the full civil rights of all people be protected, including persons of any sexual orientation, gender identity or gender expression. It calls on all settings of the church to resist overly broad religious exemption legislation that may be used as a tool for discrimination.

Commemorating 100 Years since the Armenian Genocide

A Resolution of Witness [PDF]
The UCC’s General Synod adopted a resolution commemorating the centennial since the Armenian Genocide, which began symbolically on April 24, 1915.  Recognizing long ties through mission and partnership with the Armenian community, that resolution:

A Resolution of Witness [PDF]
The Just Peace movement in the United Church of Christ marked its 30th anniversary this summer. As a way of celebrating the General Synod adopted a resolution urging congregations to proclaim themselves as Just Peace churches and calling on Just Peace settings of the church to band together and raise awareness of justice issues so that they may be better peacemakers in the world.