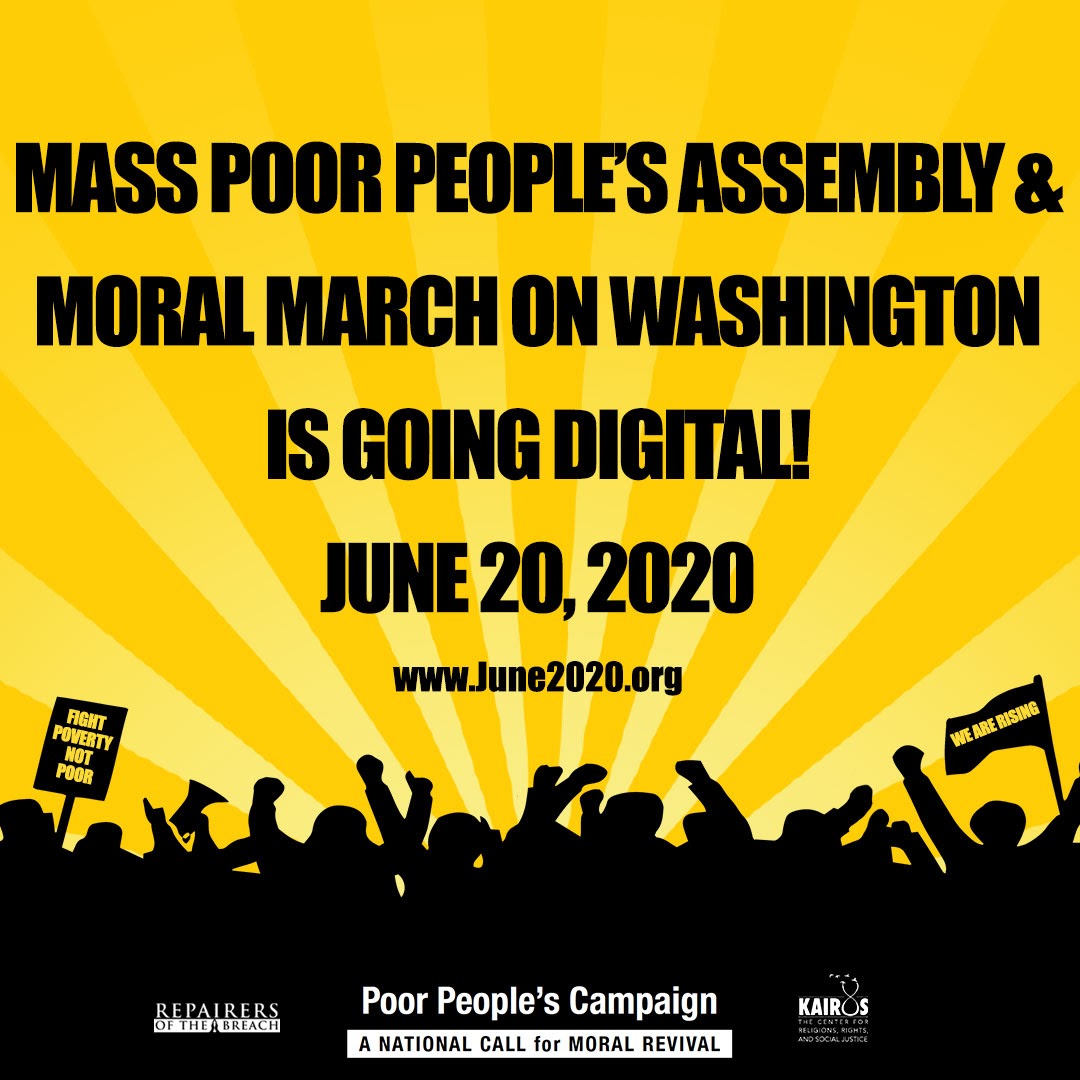 The COVID-19 pandemic, from its beginning, has amplified racial, economic and health disparities in America, exposing the existing crisis of poverty and systemic racism. The Poor People’s Campaign has long been mobilizing to reveal and eliminate those disparities in the quest for a just world for all. But because of the coronavirus, its planned June march on the nation’s capital is moving online.

The Mass Poor People’s Assembly & Moral March on Washington now hopes to gather millions digitally on June 20, demanding attention to the political, economic and moral issues that divide the country. Issues that organizers say lawmakers should be held accountable on at the polls in November.

“This pandemic has hit the poor and the vulnerable hard. Underlying health conditions, poor working conditions, low pay, layoffs causing months with no income and no savings built up, inadequate health care all conspire to ravage the poor disproportionately. We cannot be silent in this time,” said the Rev. John Dorhauer, UCC general minister and president. “Those who walk the halls of power must be held accountable.”

“Once again, we find ourselves in the midst of a moral, political, economic, and social crisis,” said the Rev. Traci Blackmon, UCC associate general minister. “This is the moment of massive response for our nation. COVID-19 is a virus. Human disregard of the other is the pandemic. When we address the latter, we will heal the rest.”

The June 20 program will be broadcast that Saturday at 10 AM EST and 6 PM EST. It will be rebroadcast on Sunday. The agenda of the Poor People’s Campaign: A National Call for Moral Revival calls for using the country’s resources for the general welfare of all citizens, especially now during the pandemic.

“The COVID-19 crisis has further exposed the complex-yet-solvable evil of poverty and beckons us to place on the center stage the lived experiences and voices of the more than 36 million unemployed and under-employed workers as well as the vulnerable communities millions of people call home,” said the Rev. Sekinah Hamlin, minister of economic justice. “As states reopen, Christians and people of goodwill must use this opportunity to recreate and even transform our economy into one that has a guaranteed living income; paths toward the eradication of debt — including student loans and medical debt; policies that end immoral lending practices; and laws that halt unjust wages.”

The UCC has been participating in the Campaign over the last two years, organizing in local communities, mobilizing on the state level and marching in D.C. The PPC is rooted in the leadership of poor people—to unite our country from the bottom up. It has brought together tens of thousands from across the U.S. to challenge the evils of systemic racism, poverty, the war economy and ecological devastation while centering the voices and experiences of poor, low-wealth, and vulnerable communities.

During the summer of 2018, poor people and moral and religious advocates in 41 states took part in number of direct actions to launch the Campaign, in an expansive wave of nonviolent civil disobedience.

The UCC and 15 other religious denominations supporting the PPC have endorsed next month’s upcoming digital gathering.

Organizers see it as “drawing on the unfinished work of the Rev. Dr Martin Luther King Jr.’s 1967/68 Poor People’s Campaign.” Through nonpartisan political action and protests, the 2020 campaign aims to counter “the interlocking evils of systemic racism, poverty, ecological devastation, the war economy and our distorted moral narrative,” said its website.

The PPC is calling on supporters to continue to raise those issues going into the upcoming national political conventions in August, during 50 days of action.

“The Civil Rights and Voting Rights Acts were passed into law in 1964 and 1965. Black communities mobilized, marched and used their bodies as resistance, because gaining access to the right to vote would also guarantee future generations the same rights and privileges. As entrenched injustices are being exposed once again, we continue to stand together and demand justice, equity, and an end to systemic racism and poverty,” said the Rev. Velda Love, UCC minister for racial justice. “Support The Poor People’s campaign and guarantee justice for all.”

In 1968, Dr. Martin Luther King, Jr. launched a Poor People’s Campaign believing that people joining together could create, as he said, “a new and unsettling force in our complacent nation.”

“Our collective voices are necessary to bring about the change we want to see in the world,” said  the Rev. Karen Georgia Thompson, UCC associate general minister. “The Poor Peoples Campaign joins our voices and witness to impact change for individuals and communities that are disenfranchised and pushed to the margins. Lend your voice for change. Register your support and bring healing to the world.”

More information on the Campaign can be found here.

A PPC digital toolkit can be accessed here.