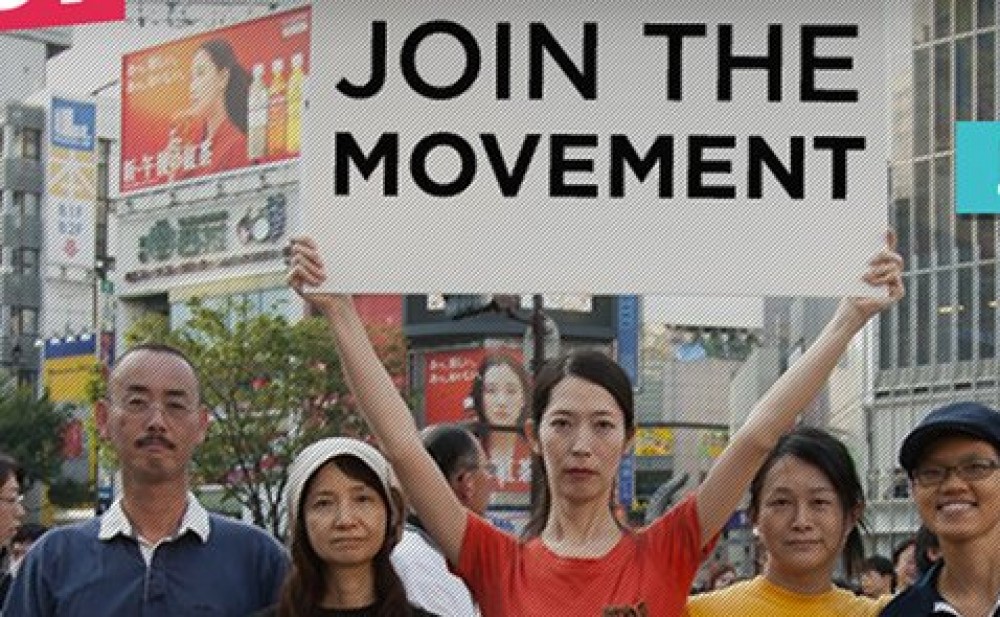 The following is an excerpt from "Resistance Guide: How to Sustain the Movement to Win" by Paul Engler and Sophie Lasoff in collaboration with Momentum.

Social movements work by getting enough people engaged, involved and activated in a variety of methods of protest, including public actions, actions directed at decision-makers and electoral work.

This raises an obvious question: How many is enough?

Surprisingly, the research suggests that this question can be answered. In Why Civil Resistance Works, Erica Chenoweth and Maria Stephan argue that no political revolution since 1900 has failed after gaining the active and sustained participation of 3.5% of the population. Some have won with lower participation—but beyond that threshold, not one has lost.

Whether or not there's a magic number for participation, once we understand just how much numbers matter in general, the most important questions about any action become clear: Is this action winning more people to our cause? Is it helping our movement grow in scale and over time? Are people more likely to sustain their participation in the resistance because of it?

In the United States, hitting the 3.5% mark would require the participation of 11 million people. That's a steep goal. But consider that as many as 4.6 million people showed up to the Women's Marches.

It isn't out of reach.

Winning support means reaching people where they're at—and moving them 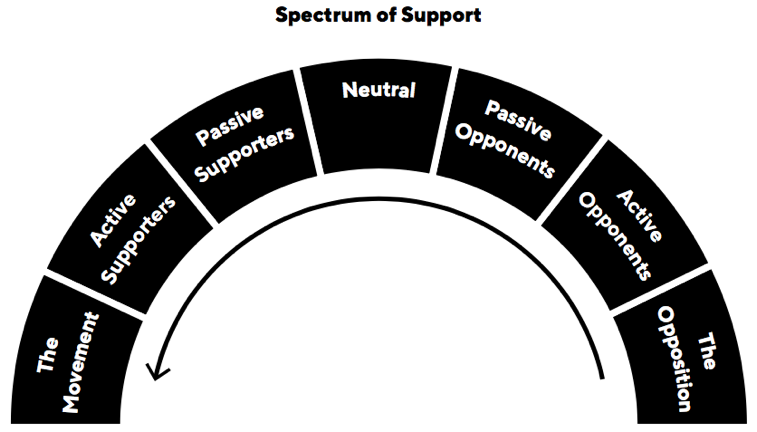 Public actions change minds. They dramatize unjust laws and decisions, make visible moral crises that have gone unseen. They energize people who feel they haven't had a voice and demonstrate that they are not alone.

Actions don't move people all at once, however. We won't succeed because a clear message causes a lightbulb moment across the country, or because one great march inspires everyone to flood into the streets. People move across a spectrum of support.

Not everyone starts in the same place. Some are neutral. Some are passive supporters. Some are against us. As the above diagram shows, a good action will push people across this spectrum. Those who are neutral may be moved to educate themselves on the issues and ultimately become passively supportive. Passive supporters may be led to get involved. Active supporters might find themselves bringing others in and becoming more fully involved as strong advocates.

Movement across this spectrum isn't always the result of conscious decision making. Often, people shift because an effective action reframes the basic moral issues behind an issue that is otherwise seen as too abstract or complex. It makes people emotionally connect to the issue and choose sides. We call this process polarization.

For social movements, protest is the most effective means of polarizing an issue. Research shows that perceptions of protest as violent or destructive of property tend to discourage participation and make a movement less effective. Confrontation, however, is not the same as violence. Confrontational tactics can draw people to a cause, even when the protesters are criticized as too abrasive.

You wouldn't always know it. The message that protest doesn't work is deeply ingrained in our political and popular culture. Anyone who tries to join a demonstration will hear the same refrain: No one is listening to you. No one cares. You're just preaching to the choir. You're too disruptive. You're too angry. You're making a lot of noise and accomplishing nothing.

This message is wrong. Dangerously wrong.

How do we know?

In recent decades, scholars have pushed back against the monolithic myth with numerous accounts of how protests changed public opinion, shaped policy, and altered the course of history. There's even quantitative evidence: A study by Daniel Gillion at the University of Pennsylvania analyzed civil rights legislation from the 1960s through the 1990s and found that every 10 protests in a representative's district made that representative one percent more likely to vote in favor of civil rights issues—a minor but nonetheless demonstrable effect on legislative progress.

Our society is adept at shutting out the voices of ordinary people. Corporations spend millions on advertising. Celebrities colonize airtime. Wealthy constituents have the attention of elected officials. In a democracy, protest is the most effective way to seize the microphone in the absence of either money or fame.

Protests capture the attention of the media and the broader public. They shine a spotlight on issues that those in power would otherwise ignore. And after heightening awareness, protests force people to take a position. Protest asks, "Which side are you on?"

The message that protest doesn't work can be so easy to believe because we rarely see change from any one protest. To move issues on a national scale, protest requires participation from tens or even hundreds of thousands of people. It requires both big and small actions, from movements that persist and adapt over time.

Protest is a vital tool for social movements. It can shape public opinion, transform political discussion, and bring new people into a movement, resulting in important long-term developments even as short-term goals like specific legislative changes prove elusive. Occupy, Black Lives Matter and the Keystone Pipeline protests are not considered to have racked up many concrete victories. But each brought thousands upon thousands of people into their respective movements, reshaping political discussion around economic inequality, racial injustice and climate change.