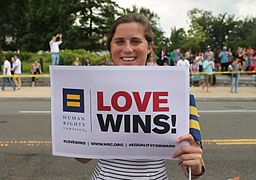 So what is to be learned from this? David Hochschild, the environmental commissioner for the California Energy Commission, contends, “I think there’s actually some lessons for the climate movement in what happened with marriage equality, because they framed the movement in terms of love: Government has no place to get between two people who love each other.” He adds, “I actually think climate change is the same thing. It’s about loving the next generation.”

As Christians, we frequently root our sense of calling in love, and I have observed that the strongest motivator for many who engage in the work of addressing the damage done to our climate is a love of children. We care about the environment they inhabit, and we care about the future they will inherit from our actions today.

Churches know how to speak of love. It is the grounds of our theology, purpose, and passion. We have an immense potential to lead on climate because of our ability to articulate what fundamentally drives so many of us to action. In truth, we should be at the forefront of the climate movement.

In this struggle, time is of the essence. Rapid change is needed. Let’s rise to the occasion.