United Church of Christ members and friends from around North America gathered online to mark Juneteenth by lamenting violence against black bodies, honoring ancestors and freedom fighters, connecting with Mother Africa and hearing how to take action for justice. 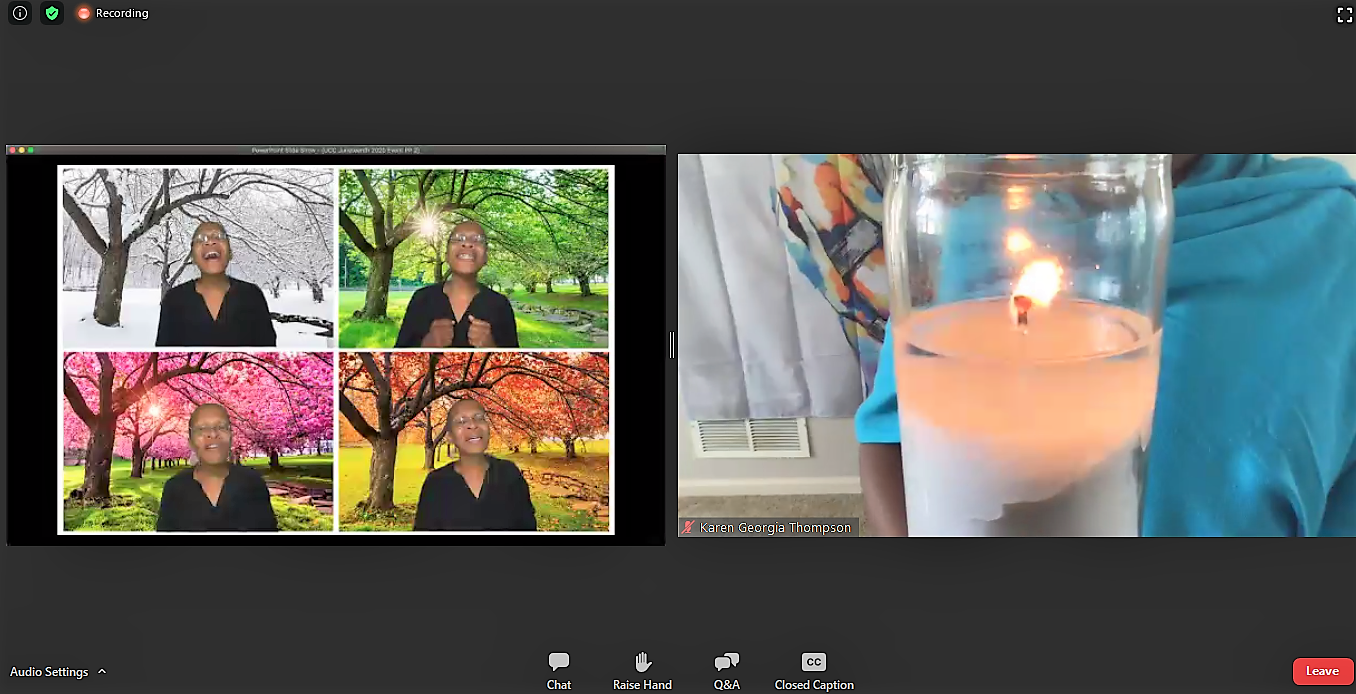 More than 1,800 devices were tuned in to Zoom for the live June 19 churchwide event, “And Still We Rise.” Produced by African American members of the UCC’s national staff and featuring guests from many walks of life and even from Africa itself, the two-hour webinar offered a mix of live and prerecorded segments. It was recorded and will be available soon via UCC social media channels. (Pictured at right, closing the webinar, is musician Lea Morris.)

Billed as the launch of four years of focused antiracist programming in UCC Racial Justice Ministries, the webinar asked viewers to start now. It urged them to join the Poor People’s Campaign, enroll in a special five-week Summer Institute of Sacred Conversations to End Racism, use election-year tools from Our Faith, Our Vote and its new Civic Action Center. And it encouraged participants to make an ongoing commitment by diving into the menu of resources at the UCC Racial Justice pages.

The webinar’s segments included “The Sacredness of Black Lives,” “Sacred Memory: People of African Descent,” “Our Oral Traditions,” “Our Sacred Rituals,” “Connections to the Cradle of Civilization,” “Resistance is in our DNA,” “Honor the Elders,” “How are the Children?” and “Public Faith and Political Action.”

Juneteenth commemorates June 19, 1865, when Union soldiers arrived in Texas with news that the Civil War had ended and enslaved people were now free – more than two years after President Lincoln’s Emancipation Proclamation, which had become official January 1, 1863.

The Rev. Velda Love (right), UCC minister for racial justice, opened the webinar by connecting the sweep of African American history to the urgency of the current moment. She mentioned historic and recent government-sanctioned or vigilante killings of black Americans, right up through that of George Floyd in Minneapolis on May 25.

“Political good will, signatures on paper, and laws do not guarantee that people of African descent will receive protection under the law,” Love said. “The evidence is before us in 2020. We are witnesses to ongoing assaults, insults, and violent acts against black bodies … and still we rise. … We rise as followers of Jesus Christ. Jesus, that sun-kissed, brown-skinned Northeast African Palestinian Jew who lived among diverse people, died at the behest of state sanctioned violence, and rose again to underscore and reiterate liberation and justice for all.”

Also setting the tone was an excerpt from “When is Someday,” a dramatic video commentary by the Rev. Otis Moss III of Chicago’s Trinity UCC, responding to recent slayings of black people, including Ahmaud Arbery, Breonna Taylor and George Floyd. Noting the last word of the traditional hymn “We Shall Overcome,” he asked: “Is ‘someday’ when there are no more bones to break, throats to choke, hearts to stop and sleeping women to shoot? … Is ‘someday’ nothing but a distant dream dangling before us as a demonic taunt?”

The webinar continued to alternate among music, testimony, poetry, video elements and conversation, weaving together lament, hope and celebrations of African and African American culture, activism and brilliance.

“Resistance is in our DNA,” said one speaker, the Rev. Audrey Price, associate conference minister of the UCC’s Central Atlantic Conference. She described the “glory” of the melanin that contributes to the beauty of the skin of people of African descent – “a community of freeborn humans enslaved by the evilness of an oppressor.”

“The bones remember freedom – that’s what the ancestors say,” sang UCC storyteller Valerie Tutson of Providence, R.I. “We’ve got the power to rise up.”

The webinar had several international elements.

And there were specific U.S. policy calls to action. The Rev. Sekinah Hamlin, minister for economic justice, listed several, including one related to reparations. She recommended support of H.R. 40, introduced in 2019 by Rep. Sheila Jackson Lee and calling on Congress to form a commission to “examine slavery and discrimination in the colonies and the United States from 1619 to the present and recommend appropriate remedies.”

Viewers sent multiple words of thanks during the course of the webinar via Zoom’s chat feature. “Thank you, planners and presenters,” wrote one of them. “Those of us who are White must do what we are supposed to do. All Black lives are sacred. Blessed Juneteenth.”