Online and in person, churches and local partners educate voters, get out the vote

In Connecticut, at First Church Middletown, it’s all about registering voters and getting out the vote – in person and in other ways.

In Houston, at St. Peter United, it’s all about helping voters understand confusing systems – and it’s all online.

Both are recipients of “Our Faith, Our Vote” grants from the national setting of the UCC.

“First Church Middletown is a historically white church, so we began by reaching out to Black leaders in our community to find out if we could support work already being done, rather than barreling ahead with our own ideas,” said First Church member Vickey Allen, who got the congregation involved. “The Middlesex County NAACP had just begun their get-out-the-vote planning and invited us to partner with them in the effort.”

That effort, Middletown Votes!, is a registration and education program designed to reach people of color in Middletown and surrounding Middlesex County. It is a project of the chapter officially known as “CT Middlesex County NAACP Branch Unit 2018-B.”

Unit President Faith M. Jackson said the effort is aided, in part, by a list from the national NAACP of infrequent Black voters in the area and their contact information. “We intend to reach primarily people of color, but will also encourage everyone that we come across,” she said.

Among the NAACP’s goals are “to register new voters, encourage everyone to complete a ballot and put it in the ballot box in their town or mail it early, or go to the polls and bring someone with you,” Jackson said

“So far, we’ve canvassed in Middletown public housing complexes, checking to see if people are registered to vote, registering those who aren’t, and leaving literature with information on how to vote, both in person and by absentee ballot,” Allen said. “Additionally, we are collecting contact information from people who would like us to follow up with them in order to help them create a plan to vote and remind them of important dates.”

Allen said First Church used its $2,500 UCC grant to rent iPads to use while canvassing. “We can check people’s voter registration status, register them to vote online, and collect their contact information in the moment,” she said.

“We also were able to hire someone to translate our literature into Spanish, pay for the printing of the flyers, and purchase personal protective equipment for our volunteers.”

In addition, the campaign is working with the Middletown Public Schools to send literature to every parent in its system and has produced videos of people testifying about why they vote, to be shared on social media.

“I’m deeply grateful to the Middlesex County NAACP for allowing us to partner with them,” Allen said. “Middletown Votes! is already doing more than I could have hoped for, and their leadership has been instrumental in that success.” 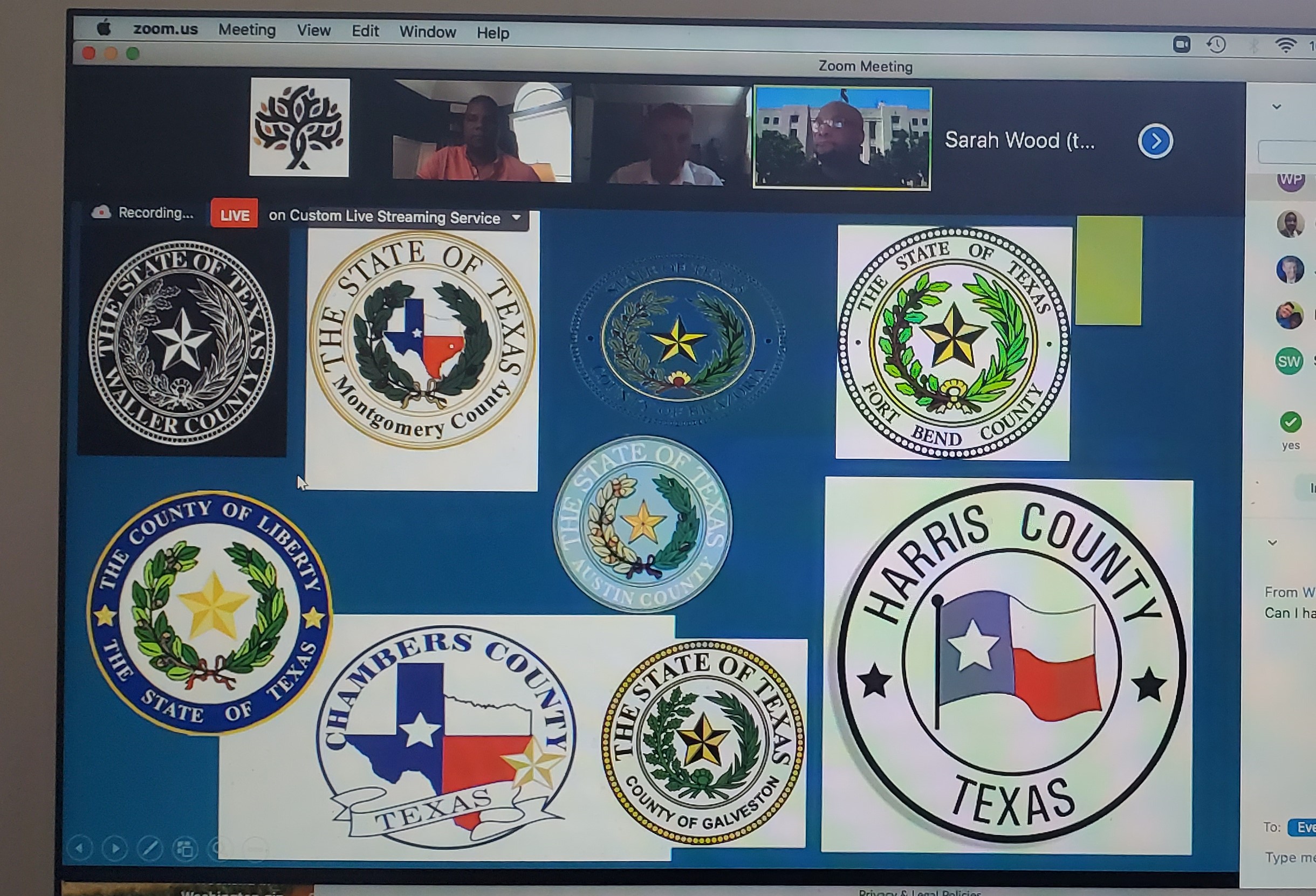 ‘Use your own brain’

The seals of several Houston-area government agencies (see image at right) appeared on screen during an online conference sponsored by St. Peter United. It was a visual reminder of a structure that can confuse new and longtime voters alike, said UCC member Amariee Collins, who coordinated the Sept. 26 conference.

The two-part webinar, “Bold Justice,” featured experts in city, county and state government who clarified the roles of each level – “how they affect your life, who the different players are” – and offered updated information on policies that could be affected by the coming election, she said.

Dozens of participants on Zoom, and hundreds more who viewed via Facebook Live, also heard presentations on voting. These covered topics such as deadlines and procedures to register and apply for absentee ballots and locations and hours of polling places, both on election day and in advance. One update included the pandemic-related announcement that Harris County, which includes Houston, will open seven of its early-voting locations open for a 24-hour period on Oct. 29.

St. Peter United used its $1,000 grant to create and publicize the conference. Texas Impact, Restoring Justice and the League of Women Voters were among the local organizations providing speakers and expertise.

“If we are about the business of helping people in their everyday lives, then we have to know and understand that Jesus was the political person that he was, and that politics, laws, policies, regulations – all play a part in our everyday lives,” Collins said. “Part of that is being part of politics and voting, and helping educate people how it works. I don’t want to tell you who to vote for. I want you to use your own brain. But we need to make sure people have a choice.”

Sandy Sorensen, director of the UCC’s advocacy office in Washington, D.C., said she is encouraged by the varied ways congregations are staying active in an election run-up unlike any other.

“I am always inspired and energized by the powerful election engagement work of congregations supported by the UCC ‘Our Faith, Our Vote’ small grants,” Sorensen said. “These are congregations building on modest grants to identify the needs in their communities and offering opportunities for voter registration, issue education and voter mobilization.

“I didn’t quite know what to expect given the challenge of COVID-19 and the divisive, ever-changing political and social climate, but the 2020 OFOV small grant projects reflect amazing creativity, strategic visioning and faithfulness in an unprecedented election season. It gives me great hope.”

Resources available at the UCC Our Faith, Our Vote web pages include an action center where people can check their registration and find out where to vote, issue-education webinars and one-pagers, and video and print pieces explaining how churches can stay within the rules of nonpartisan activism.

“If someone has never voted before in their life, this the election to do it,” said Jackson, the NAACP official in Middletown. “This is one of the most important elections in history, and yes, their vote can make a difference. This is why we are doing what we’re doing to raise awareness and to get people engaged in this election and the process.”